Growth of REIT NOI: Signs of a Maturing Sector

Total NOI of stock-exchange listed Equity REITs has nearly tripled over the past ten years, to more than $20 billion each quarter since mid-2015 (see the NAREIT T-Tracker®, which reports NOI and other operating results for the listed REIT industry). The sources of this tremendous growth, and how they have shifted since 2000, reflect how the sector has matured.  Below we analyze NOI growth using newly-revised T-Tracker estimates that account more accurately for the impact of REITs entering the FTSE-NAREIT index. (Previous estimates had reported the contribution to growth of total NOI by new REITs using their NOI as of their initial filings with the SEC, as reported by SNL. The revised estimates report their contribution to growth based on their NOI at the time they entered the FTSE-NAREIT index.)

Nearly all of the growth in total NOI during the early years of the Modern REIT Era came from new REITs, as can be seen in the green bars for the early 1990s in the first chart below. By the mid to late 1990s, however, most of the growth in NOI came as existing REITs expanded their property holdings, the red bars in the chart. Increases in same-store NOI (SS NOI), the blue bars, made relatively little contribution to total NOI growth in the 1990s. 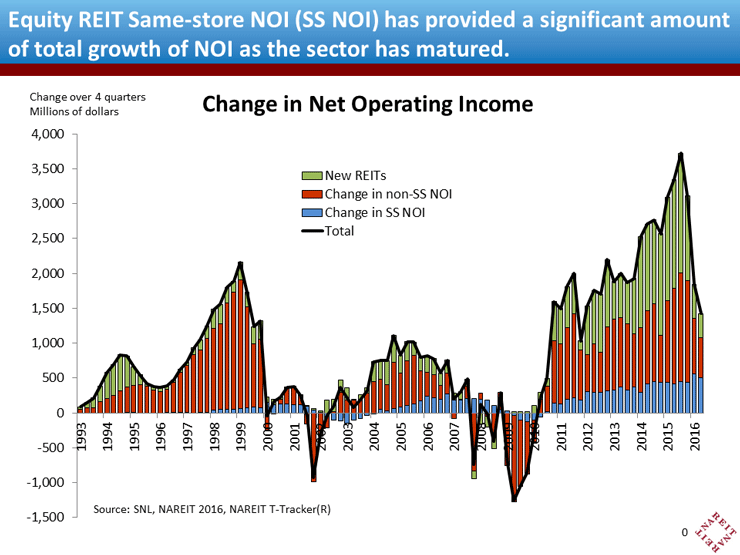 The period since 2011 saw further contributions to NOI through new REITs, both IPOs and conversions, as well as growing property portfolios of existing REITs. In addition, though, organic growth through SS NOI has become an important factor as the sector has matured. In 2016:Q2, in fact, SS NOI contributed over a half-billion dollars to the total increase in NOI, roughly equal to the impact of portfolio growth by existing REITs and far greater than the contributions of new REITs. 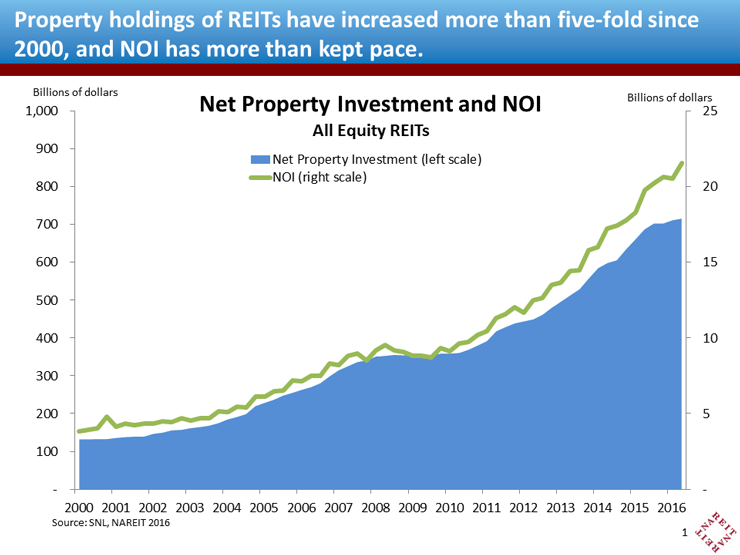 These increases in NOI reflect the impressive growth of the Equity REIT sector, whose net property holdings have increased more than five-fold since 2000. As the REIT sector has grown and matured, the importance of Equity REITs in investment portfolios has grown as well. Reflecting the rise in the Equity REIT sector, in September 2016, Real Estate was elevated to a new headline sector under the Global Industry Classification Standard (GICS). This move is likely to improve the visibility of the real estate sector and may boost demand for Equity REITs in investors’ portfolios. 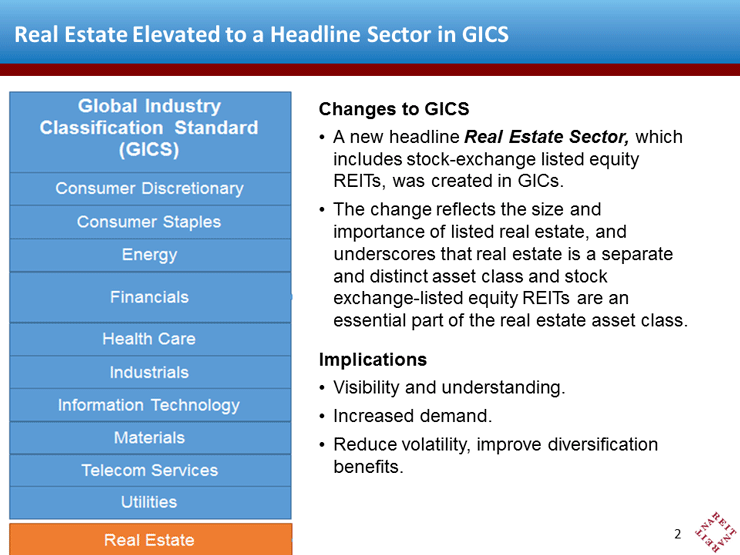