Income and Capital Appreciation from Real Estate Investing: The Participation Trophy and the Performance Record

Recently I was looking at marketing materials for a core private equity real estate investment fund touting a so-called “benefit” that was, to put it bluntly, weird: the manager boasted that “income accounts for nearly all of the total return.” (No need to call out that particular manager—I’ve seen many other instances of the same thing—so that’s not an exact quotation.)

Why would anybody brag about failing to earn any return other than income, in an asset class where sizeable current income is all but guaranteed and where others seem to be generating the growth in income that results in capital appreciation on top of it?

Over the past 25 years (1992Q3-2017Q2), the NCREIF Property Index (NPI) published by the National Council of Real Estate Investment Fiduciaries has shown income averaging +5.25% per year (compounded) after fees and expenses that average about 100 basis points per year. (Fees and expenses are charged against income, not capital appreciation.) NCREIF’s Open-End Diversified Core Equity (ODCE) Fund Index shows net income averaging +5.09% per year after fees and expenses that averaged 103 bps/yr.

(Note: the funds that comprise the ODCE apply leverage to their investments, so there’s really no excuse for them to be generating less income, on average, than the average of the unlevered NPI along with, as I note below, less capital appreciation too. That they have done both on average is a testament to the unfortunate facts that (1) they fail to invest all their investors’ capital, (2) they have exhibited a tendency, on average, to increase leverage just when they should be reducing it and vice versa, and (3) they have exhibited a tendency, on average, to buy properties just when they should be selling them and vice versa.)

Over the same period stock exchange-listed equity REITs in the U.S. earned income averaging +4.75% per year after investment management fees that average about 52 bps/yr (for an actively managed mutual fund). It’s important to note that dividing total returns between “income” and “capital appreciation” is done differently on the private and public sides of the real estate market, so those figures can’t be compared directly: the point is simply that they’re in very much the same ballpark.

In other words, there’s little difference between the income earned by the largest, most sophisticated investors in private equity real estate and the income earned by the smallest individual investors in listed equity REITs. Moreover, net income returns from real estate investments—whether you get them from private equity managers or from listed equity REITs—have been remarkably stable and predictable through even the worst market crises. The three measures of quarterly net income showed annualized volatilities between 0.72% and 0.86%, and the smallest quarterly net income return for any of them was still +0.69%. For comparison, the volatility of total returns on 1-month U.S. Treasury Bills (generally regarded as a “risk-free” return) was 1.03% over the same period, and the smallest value was truly microscopic at +0.0025%.

For heaven’s sake, even the most unlikely sources produced pretty much the same real estate income: according to the NCREIF/Townsend Fund Indices (which unfortunately were discontinued after 2013Q3), private equity funds following value-add and opportunistic strategies—in which they supposedly gave up income in the search for better capital appreciation—produced net income returns averaging +4.73% per year and +4.05% per year respectively over the slightly different 25-year period 1988Q4-2013Q3. (Their net income returns were, however, substantially more volatile at 1.27% for value-add strategies and 2.61% for opportunistic strategies, and frequently negative because of their very high fees averaging 169 bps/yr and 258 bps/yr respectively.)

What’s weird is when investment managers suggest that you shouldn’t expect to get anything much more than that. Here’s an example: Investment Property Databank (IPD), a real estate investment benchmarking company owned by MSCI, published a 2013 research paper stating that, “for most markets and over the longer term the vast majority of real estate return comes through income rather than capital appreciation.” Is that true? 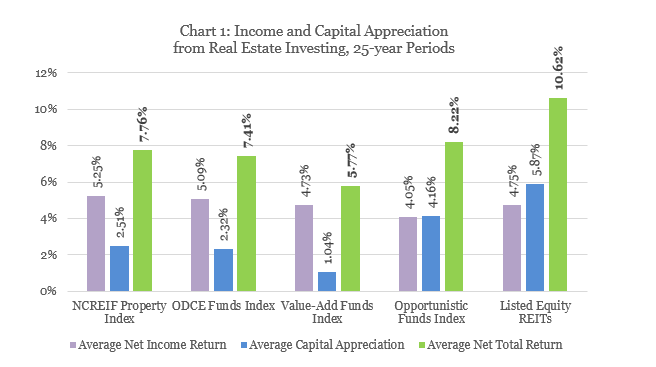 Okay, here’s a run-down of capital appreciation measured by the same sources over the 25-year historical periods specified above, as shown in Chart 1:

Let’s give that a little bit of time to sink in. Over a quarter of a century, even the simplest investment in listed equity REITs has produced about the same income as the most “sophisticated” institutional investment managers produced, on average, in private equity real estate—along with capital appreciation that beat the pants off the private equity crowd by something around 350 basis points per year. (I’m not including the value-added and opportunistic crowd in that comparison because the available 25-year period for them included not one but two real estate market downturns, exactly the kinds of situations when their highly levered “strategies” are at their worst.)

What does that mean for the idea that “the vast majority of real estate return comes through income rather than capital appreciation”? Well, in private equity real estate investing it appears to be more or less true—which is a howling shame for anyone who invests that way. For the NPI, 68% of net total return came from income; for the ODCE it was 69%; for value-added funds (over a slightly different 25-year period) it was 82%; in all those cases the high income share mostly reflected very poor capital appreciation on average.

For real estate, a change in the future stream of cash flows comes from a change in occupancy rates and/or rent growth (minus expenses of course). If you can increase future cash flows by growing net operating income, that’ll result in positive capital appreciation; those investment managers who can grow future net operating income the most will generate the greatest capital appreciation.

So if your real estate allocation is in the hands of a manager who thinks real estate investments should produce nothing more than steady income, my suggestion is that you look for a better manager. Honestly, it shouldn’t be hard to find one.

Note: it’s important to make a nod to the spread among asset managers: some managers represented by each index (NPI, ODCE, Value-Add, Opportunistic, and listed equity REIT) have, of course, produced substantially higher capital appreciation than others in the same index. If your asset managers have, on average, significantly outperformed their peers, then congratulations on having chosen well. As I noted in a recent post, however, data compiled by Cambridge Associates suggests that even the top-quartile private equity real estate investment funds have often failed to perform as well as just the average among listed equity REITs. In short, don’t let your managers off the hook for having accomplished nothing more than beating their peers: they should be giving you strong income and genuinely strong capital appreciation, too.