Not Your Grandad’s REIT: Pictures of an Evolving REIT Industry

The REIT industry has shown tremendous growth over the past two and a half decades, which helped spur the move by S&P/MSCI to create a new headline sector for Real Estate in the GICS classification system of listed equities. There’s been more to this growth than just bigger numbers, though. The REIT industry has evolved as it has expanded, and looks quite different today than it did a generation ago. 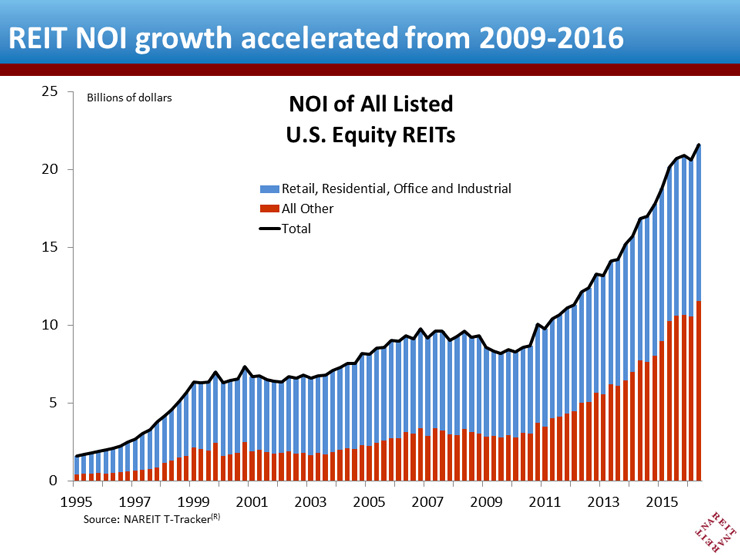 In the early days of the Modern REIT Era during the 1990s, roughly three-quarters of Net Operating Income (NOI) came from just four property sectors: Retail, Residential, Office and Industrial REITs. These sectors continued to provide the lion’s share of NOI through the end of 2009. The growth of the listed Equity REIT industry subsequently ramped up during the recovery from the financial crisis, as REITs helped to recapitalize the commercial real estate sector of the economy at a time when many traditional investors in real estate struggled. Total NOI more than doubled during this period, from $8.5 billion to $21.6 billion (all data are from the NAREIT T-Tracker®). 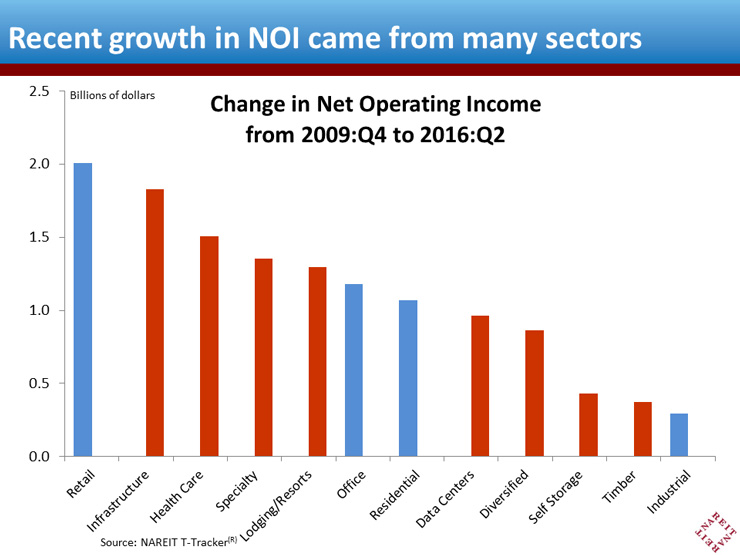 This growth surge since 2009 has been powered by a diverse set of property types. The Retail sector remained in the top spot in terms of the increase in NOI from 2009:Q4 to 2016:Q2, with a total gain of $2.0 billion. Next in line, however, were a wide range of other property types, including Infrastructure ($1.8 billion), Health Care ($1.5 billion), Specialty ($1.4 billion) and Lodging and Resorts ($1.3 billion). Two-thirds of the increase in total NOI over this period came from sectors outside of Retail, Residential, Office and Industrial sectors, and these other sectors accounted for over half of total NOI in the most recent quarters. The contrast between these groups is even more impressive in terms of percentage growth of NOI. NOI for the Retail, Residential, Office and Industrial sectors rose 82 percent from 2009:Q4 through 2016:Q2. NOI for all other sectors, in contrast, rose nearly 300 percent over this period. 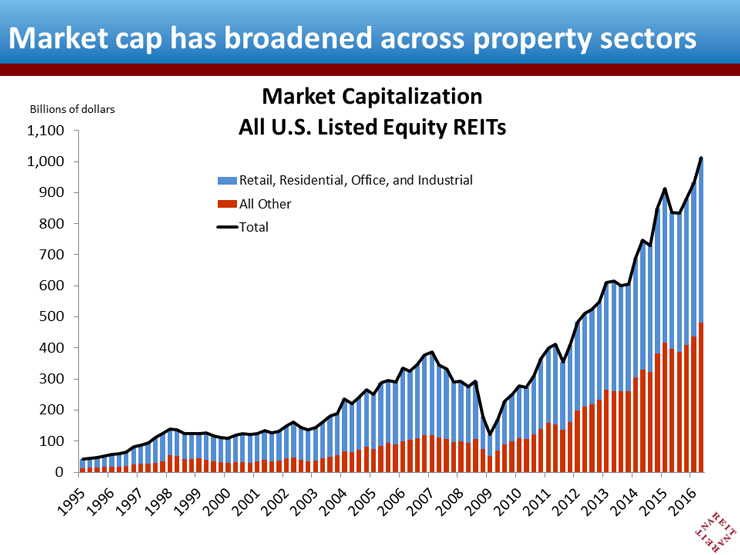 The increasing diversity of the REIT industry is a direct result of the versatility of the REIT structure. REITs are ideal for raising equity capital in public markets and efficiently managing large portfolios of income-producing real estate. It’s interesting to note how the REIT structure has been successfully applied in growing areas of the modern high-tech economy. For example, infrastructure real estate, which includes the cell towers that transmit the voice and data signals in a modern economy, and data centers, which house the servers on the ground that are often referred to as the “cloud,” were not represented in the public REIT industry in 2009. By 2016, however, they have risen to generate nearly 14 percent of total NOI. This impressive growth helps demonstrate how REITs and real estate house the activity that drives our modern economy.