REIT Beta by Property Type: Most REIT Sectors Have Brought Down Portfolio Volatility Most of the Time

The second reason is perhaps even more important: REITs have provided a diversification benefit that has enabled investors to reduce the volatility of their overall portfolio without paying a cost in the form of lower returns and therefore lower wealth. That’s why the diversification benefit has been called “the only free lunch in investment management.”

The diversification benefit can be measured using beta, which reveals how much REIT returns fluctuate relative to a broad category of investments. Technically, REIT beta is often measured as the slope coefficient in a regression of REIT returns on returns for the broad stock market. Investors typically look for beta less than 100%, meaning that holding those assets (REITs in this case) should reduce the volatility of their overall portfolio.

The REIT market as a whole has demonstrated a long-term beta of just 75 percent relative to the broad stock market (with, incidentally, an alpha of +3.52 percent per year). That beta is quite low for equity assets with strong long-term total returns, especially considering that REITs are actually traded as part of the stock market. Any investor, no matter how big or how small, can get access to that diversification benefit by investing in an exchange-traded fund (ETF) or mutual fund that invests in the broad REIT market.

Some investors, though, prefer to identify specific segments of the REIT market—or, of course, individual companies—and use those targeted REIT investments to diversify their investment portfolios while seeking to outperform the broad market. For those investors, I thought it would be useful to analyze beta by property type, and specifically to see how the beta of each property-type segment has changed over time.

There are two take-aways. First, the REIT diversification benefit doesn’t depend very much on which property-type segment you choose: almost every REIT sector has provided beta less than 100% almost all the time, thereby reducing the fluctuations in investors’ wealth portfolios. Second, there may be a reason to select individual sectors depending on whether your outlook for the broad stock market is generally more bullish or more bearish. 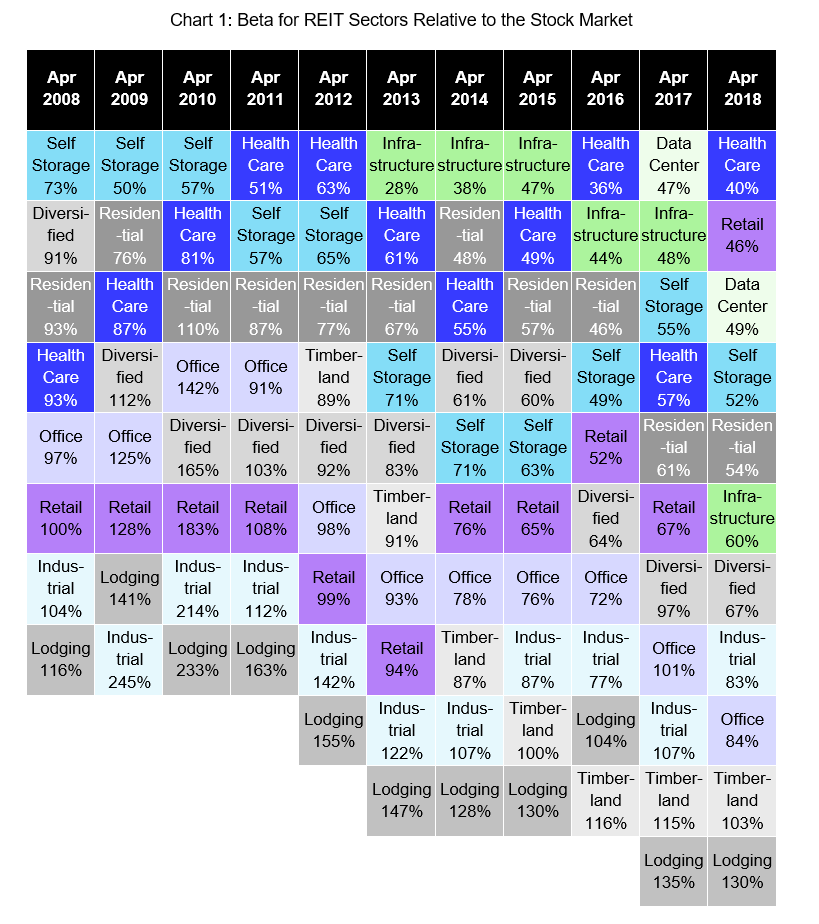 Chart 1 shows the beta for each REIT sector relative to the broad stock market. (Technical note: this is based on a DCC-GARCH model estimated using monthly total returns from the FTSE Nareit U.S. Real Estate Index Series and the Russell 3000 for January 1994 – April 2018, with later starting dates for Timberland, Infrastructure, and Data Centers; beta is computed from the DCC-GARCH estimates of volatility and correlation; shown are the average value of the monthly estimates of beta during each 12-month period.)

Several REIT sectors are generally considered “defensive,” for reasons you can easily see: the Self-Storage sector, for example, has never shown a beta higher than 73 percent; the Health Care beta has never been higher than 93 percent and was usually much lower; Infrastructure (with a shorter history) has never shown a beta higher than 60 percent; and Data Centers have shown beta of just 47 percent and 49 percent in the two full years of data available. Residential REITs also appear to be defensive, with beta less than 100 percent in every 12-month period except the one ending in April 2010.

Several other REIT sectors generally seem to be more cyclical, meaning that they tend to benefit more when the broad stock market is rising. That’s most clearly true of REITs in the Lodging & Resorts sector, whose returns are more sensitive to the increases in both business and vacation travel that tend to happen when company earnings and household incomes are increasing most strongly. It has also been the general tendency for Timberland REITs, whose returns tend to respond to increases in homebuilding activity, and Industrial REITs, where increases in domestic and international trade respond to increases in economic activity and consumer purchasing power.

Indeed, those three sectors have been among the best performers in the REIT industry over the past 12 months of generally strong stock market performance, with Industrial and Timberland REITs actually outpacing the broad stock market with total returns averaging 16.5 percent and 15.6 percent (compared to 13.0 percent for the Russell 3000) and Lodging REITs not far behind at 9.5 percent. If your outlook for the broad stock market tends to be bullish, or if you look to your REIT investments primarily for strong long-term total returns when the stock market is rising, you may want to pay particular attention to the “cyclical” REIT sectors.

Beta for the remaining REIT sectors, Office and Retail, has not established either of them firmly within either the “defensive” or the “cyclical” camp, but in both cases their high-beta years were some years ago: in fact, not since 2011 has either of them shown a beta greater than 100 percent except Office during the 12-month period ending April 2017—and that was only 101 percent. In fact, using a long-term regression of monthly total returns since the beginning of 1994 (rather than the DCC-GARCH model over 12-month periods) gives long-term beta of just 75% for Retail with alpha of +4.2 percent per year and just 83 percent for Office with alpha of +3.8 percent per year.

Of course, beta is not the only performance metric worth considering when you decide on your REIT allocation, so I’ll address other important performance metrics in other market commentaries. Also, it’s worth keeping in mind that—as I’ve shown in other market commentaries— the entire REIT industry seems to be significantly undervalued, suggesting that investors are likely to be rewarded with strong total returns over the next few years regardless of which property-type segments they choose. I hope, however, that this close look at REIT beta by property type will help you make your decisions about how to allocate your capital within the REIT market.