REITs Look Undervalued, Regardless of the Interest Rate Environment

In recent market commentaries I’ve shown how investors can use simple valuation metrics that have historically provided very dependable signals regarding future REIT total returns as well as REIT performance relative to the broad stock market. For example, the average market yield on Baa-rated corporate bonds usually exceeds the average dividend yield on equity REITs by about 130 basis points—but as of mid-April the spread between them was just 38 basis points.

Historically, when REIT dividend yields became high relative to the yields on other income-oriented investments, that has usually been a sign that REITs had become undervalued and were likely to perform strongly—by themselves, and relative to other investments—over the next several years. For example, since the early 1990s (roughly the “modern REIT era”), when the spread relative to Baa-rated corporates was 50 basis points or less (including those rare occasions when REIT dividend yields exceeded Baa yields), over the next three years REIT total returns have averaged 18.8 percent per year and outperformed the broad stock market by an average of 11.1 percentage points per year.

The modern REIT era, however, has been a time during which interest rates have generally been declining: as Chart 1 shows, Baa yields exceeded 10 percent at the beginning of the 1990s, whereas they’ve been less than five percent during most of the last few years. That raises the question whether the valuation analysis I’ve described in previous posts is likely to hold even if interest rates rise over the next few years, as most market participants expect. 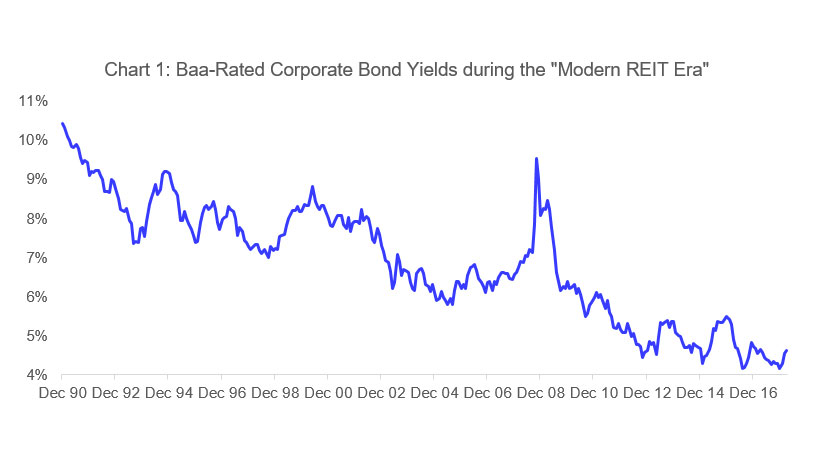 Fortunately, there have been many periods—many of them quite extended—during which interest rates were increasing even though the longer-term trend was downward: in Chart 1 you can see several such rising-rate episodes. We can use those historical periods of rising interest rates to help us think about how increases in interest rates are likely to affect REIT returns in our own future.

First, though, let’s make sure our analysis is grounded in a solid understanding of what we expect to see. As I’ve noted in other recent market commentaries , when interest rates increase because of strengthening macro demand conditions, real estate investors have tended to benefit from rising occupancy rates, rent growth, property values, and lease income; furthermore, borrowers that use predominantly fixed-rate debt—such as REITs—benefit from a decline in the market value of their fixed-rate debt when market interest rates rise. (My colleague Calvin Schnure has also published recent market commentaries focused on how REITs have defended themselves against what might otherwise be ill effects of rising interest rates.)

With that conceptual grounding, let’s look at the historical data on yield spreads specifically during periods of rising interest rates. To do this, I started with month-end data on yield spreads: that is, the yield on Baa-rated corporate bonds minus the dividend yield on the FTSE Nareit All Equity REIT Index. (I used month-end data because it goes back further than the average over the month, and also because that makes it more useful for portfolio decision-making purposes.) I identified periods of “rising” and “falling” interest rates according to whether the Baa yield was higher or lower 12 months later. Then I evaluated the yield spread as a buy/sell signal in the same way I’ve done for my previous market commentaries on REIT valuations: by looking at average actual REIT returns, going forward, as a function of the yield spread at the beginning of that period. Chart 2 summarizes the results. 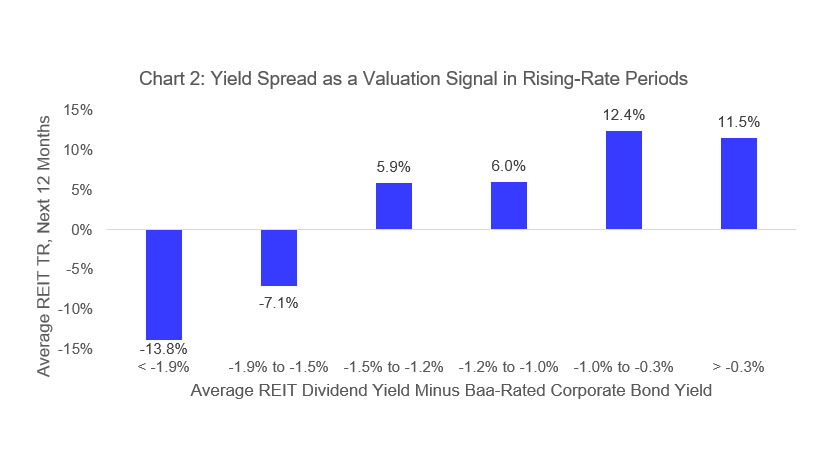 Remember that when REIT dividend yields are large relative to bond yields, that’s typically a signal that REITs have become undervalued and are likely to outperform in the future. As Chart 2 shows, that general rule has held historically even when interest rates were increasing: when the yield spread was 30 basis points or less (including those rare times when REIT yields were actually higher than Baa yields) AND corporate yields would be increasing over the next year, REIT total returns over the next year averaged 11.5 percent.

Would investors be even better off if interest rates don’t increase? Sure. The same regressions, but applied to falling-rate periods rather than rising-rate periods, suggest that today’s yield spread of 38 basis points would lead to predictions that REIT total returns would average 22.2 percent per year over the next three years and outperform the broad stock market by 10.9 percentage points per year, provided that interest rates fall rather than rise.

Let’s not get too greedy, though: historically, a yield spread like 38 basis points has been even more rare at the beginning of falling-rate periods than it has been at the beginning of rising-rate periods. The important conclusion is just that current yield spreads are providing what historically has been a very bullish signal for future REIT returns, regardless of whether interest rates are going up or down.