REIT earnings fell sharply in the second quarter, with FFO down 21.7% compared to the first quarter, to $11.6 billion, according to recent data from the Nareit T-Tracker®. 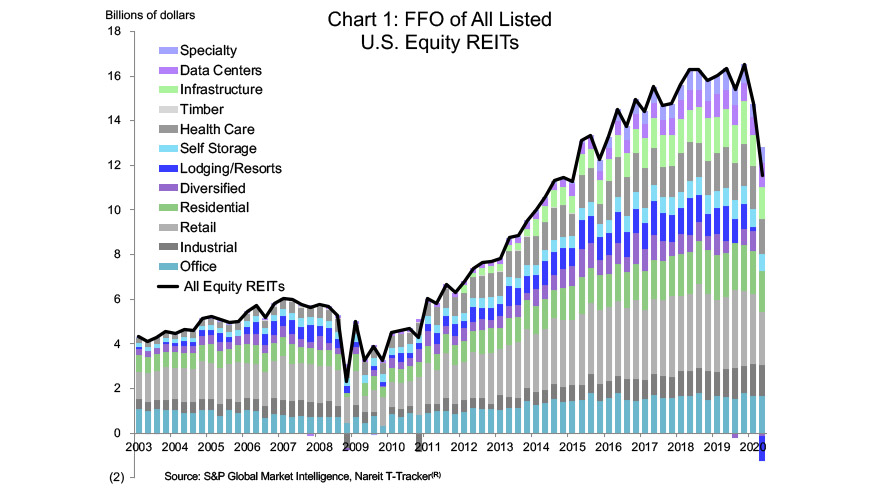 The pandemic and shutdowns had a disparate impact across the different property sectors.

Some sectors had significant declines, including two sectors with negative FFO. Lodging/Resorts reported large negative FFO, -$1.1 billion, and FFO of Diversified REITs was -$124 million. FFO of Retail REITs declined 25.0%, including Regional Malls, where FFO was down 31.7%. One other sector, Healthcare, had a double-digit decline, with FFO down 16.7%;

Many sectors posted modest declines in FFO. Residential, Industrial and Office REITs saw FFO decline by less than 5%, while Self Storage had an 8.6% decline;

FFO rose among the property sectors that support the digital economy. Infrastructure (+3.8%), data centers (+32.6%). Specialty REITs, while not related to e-commerce, posted a 19.6% rise from the first quarter. 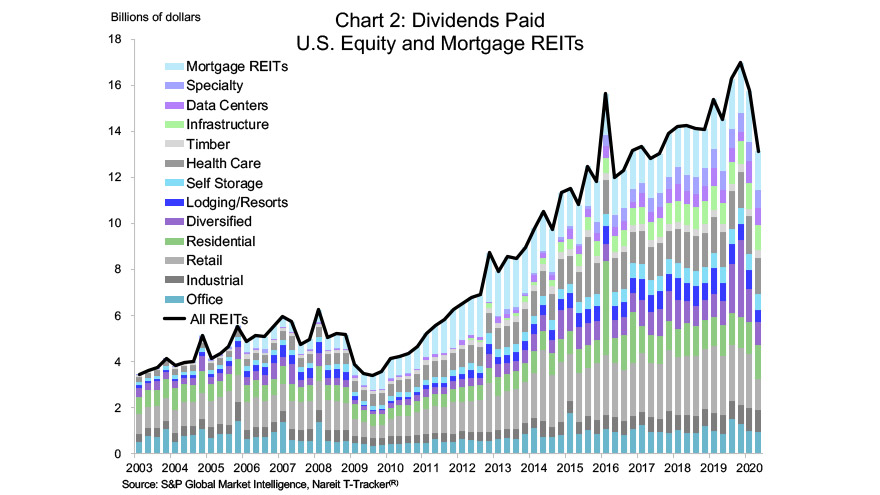 By property sector, Retail REITs had a 40.5% decline in dividends paid; Lodging/Resorts, 39.8% decline; and Diversified, 29.3% decline. Sectors with higher dividend payments include Residential and Timber REITs. Other sectors had small changes, up or down;

Same-store net operating income (SS NOI fell) 7.5% from one year ago. The largest declines were in the Retail sector, where SS NOI was 20.7% lower than one year ago. Most other sectors reported smaller declines, while SS NOI of Industrial REITs rose 2.6%. 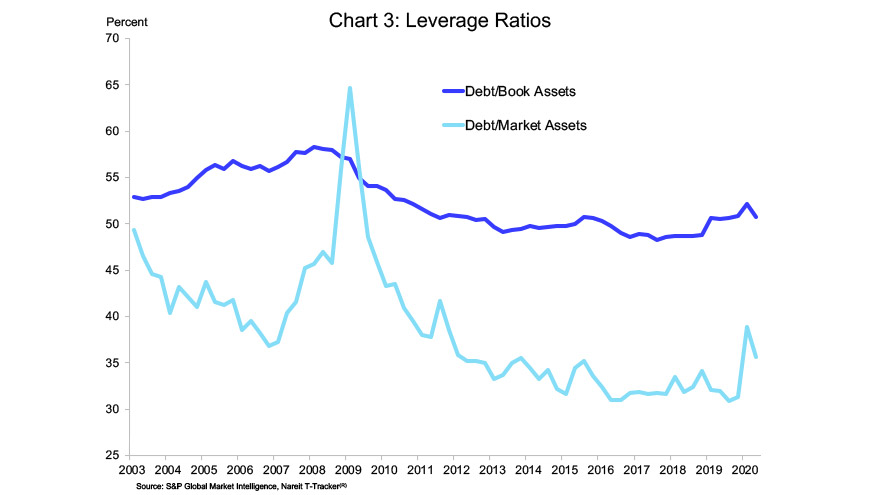 Despite the sharp decline in earnings, most REIT sectors displayed financial resilience.

REITs had reduced their leverage ratios in the decade prior to the pandemic. Lower leverage, and more sound balance sheets overall, improved the REIT sector’s ability to withstand the shocks from the pandemic. The debt-to-book-asset ratio stood at 50.8%, little changed from the prior quarter and near the lows reached in recent years. These book leverage ratios compare to the much-higher leverage of 58.3% in 2008;

Longer debt maturities protect against liquidity pressures and refinancing risks during the pandemic. The weighted average maturity of REIT debt was 83.4 months, or nearly seven years, compared to less than five years on the eve of the financial crisis in 2008; 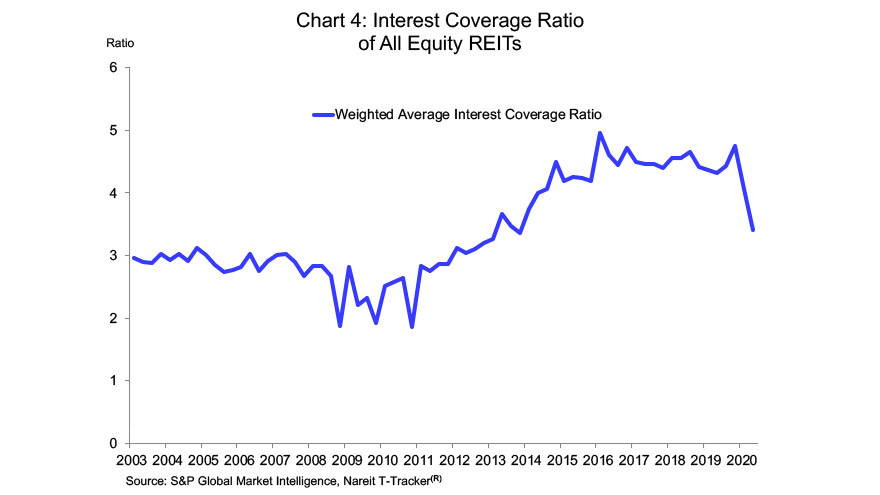 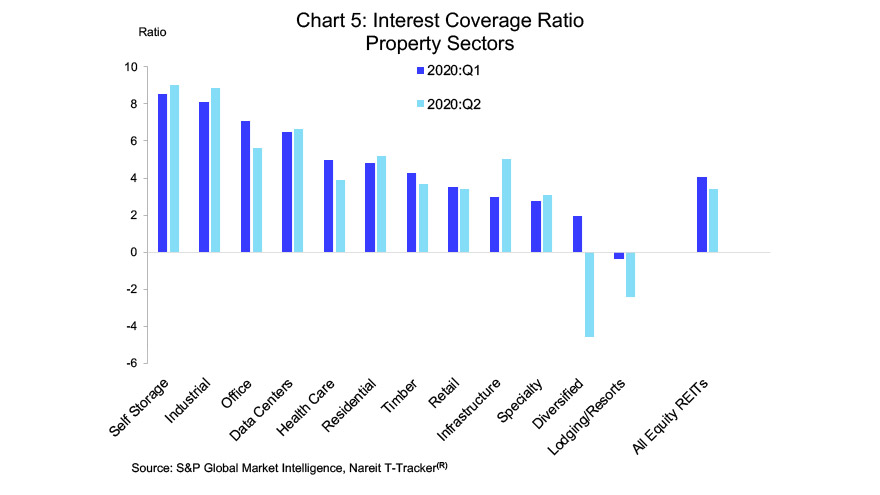 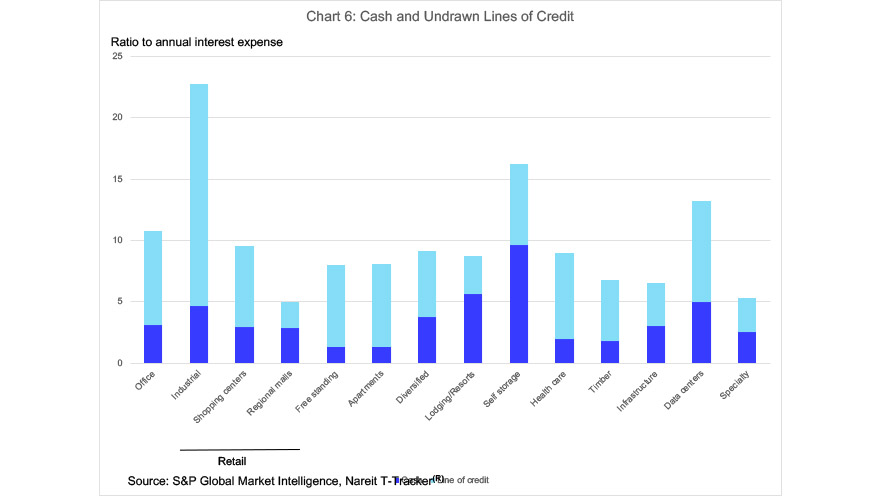 The sharp decline in REIT earnings reflects the record contraction in GDP in the second quarter. Economic activity hit bottom in April, however, and began rebounding over the past four months. In fact, retail sales in July had already risen above pre-pandemic levels, which should bolster the revenues of Retail REITs during the second half of this year. Continued recovery of the overall economy, so long as there are no sharp setbacks due to a resurgence of the COVID-19 virus, is likely to benefit all property sectors.