REIT Exposures to Interest Rates at an All-Time Low

Two of the biggest questions for investors for the remainder of this year will be what happens to interest rates, and how will changes in the interest rate environment affect businesses and financial markets, including REITs?

The first question is the easier one to answer—rates are headed higher. Federal Reserve policymakers have indicated they expect to continue raising short-term interest rates. The FOMC “dots” chart shows that policymakers currently plan on three or maybe four rate increases, possibly including one at the FOMC meeting on March 20-21. Long-term rates are likely headed higher as well. The yield on the 10-year Treasury note, which has risen 85 bps since last September, is expected to increase another 25 bps over the next 12 months and 10 bps more over the subsequent year, according to forward rates implied by the Treasury yield curve.

There’s good news on the economy’s likely resilience, though, as interest rates move up. The Fed is raising rates to remove the monetary stimulus it has provided since the financial crisis. Their stated goal is to keep growth of the economy from exceeding its potential, as opposed to slowing an economy that has already overheated. The latter would require larger and more rapid rate hikes, but the anticipated path for the Fed is gradual. The economy is likely to continue to grow, generating demand for commercial real estate and driving rent growth. 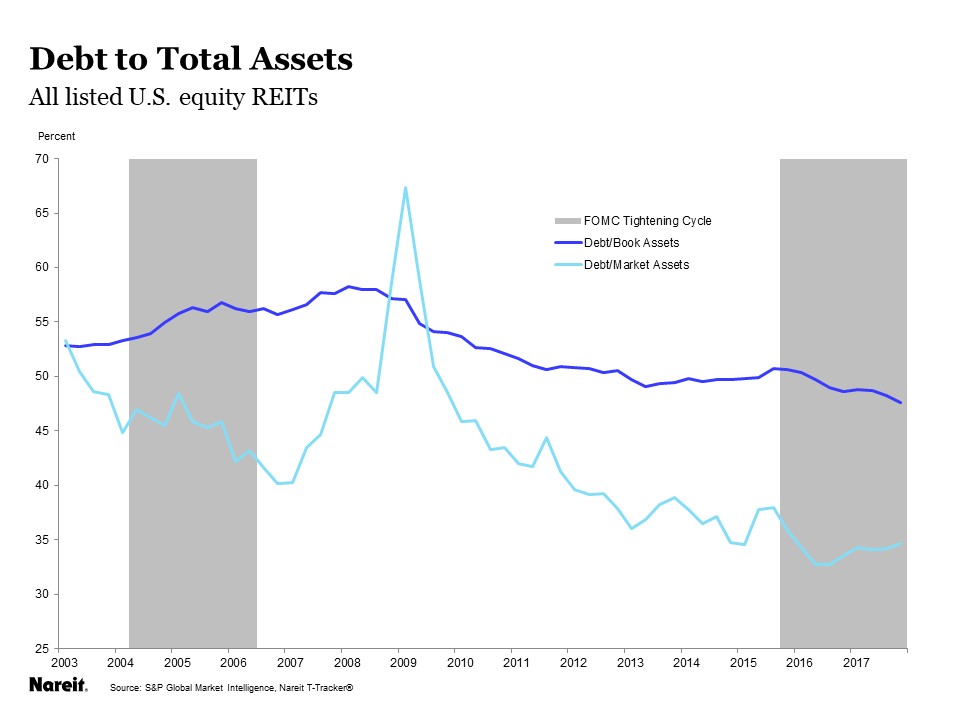 REITs are well positioned to handle the rise in interest rates. The balance sheets of the REIT industry overall are less leveraged than at any point in the past 20 years, according to the Nareit T-Tracker®. The ratio of debt-to-book assets declined 95 basis points over the past year, to 47.6 percent in 2017:Q4. The market leverage ratio, which substitutes market cap for the book value of equity, has moved slightly higher in recent quarters but is still near the record low reached in 2016. 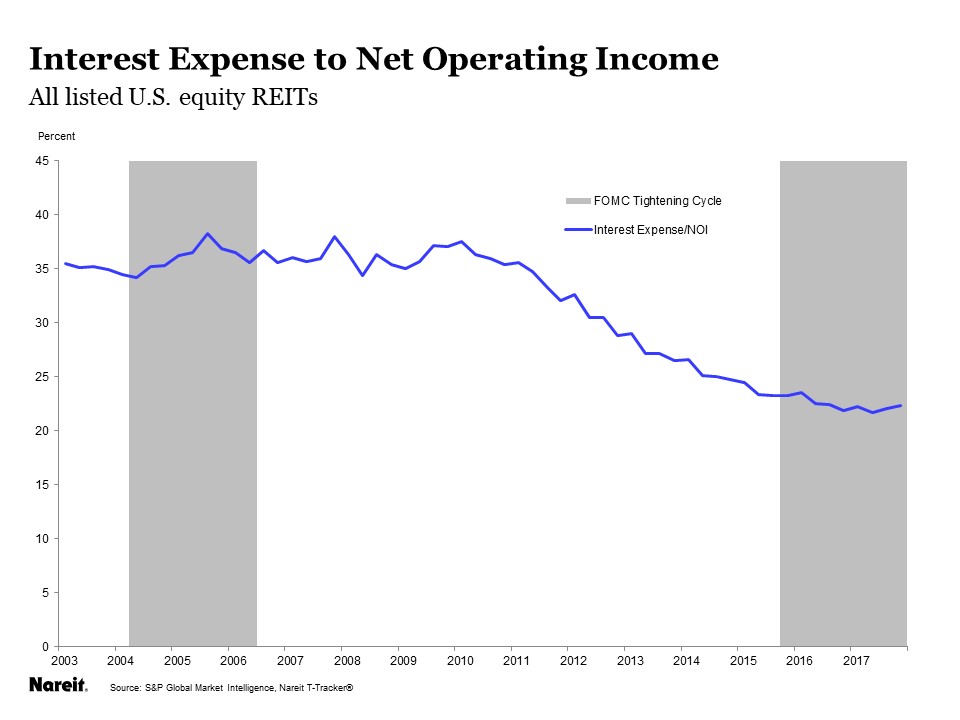 Interest expense takes a smaller bite out of REITs’ earnings, because of the decline in leverage and also the low level of interest rates. Interest expense was 22.3 percent of net operating income (NOI) in the fourth quarter, down from 38 percent prior to the financial crisis. Interest expenses are not likely to rise much as rates move higher, because nearly all of the borrowings by REITs are fixed-rate debt. Moreover, REITs have extended the average maturity of their debt to 75 months, locking in these low interest rates until well into the next decade. 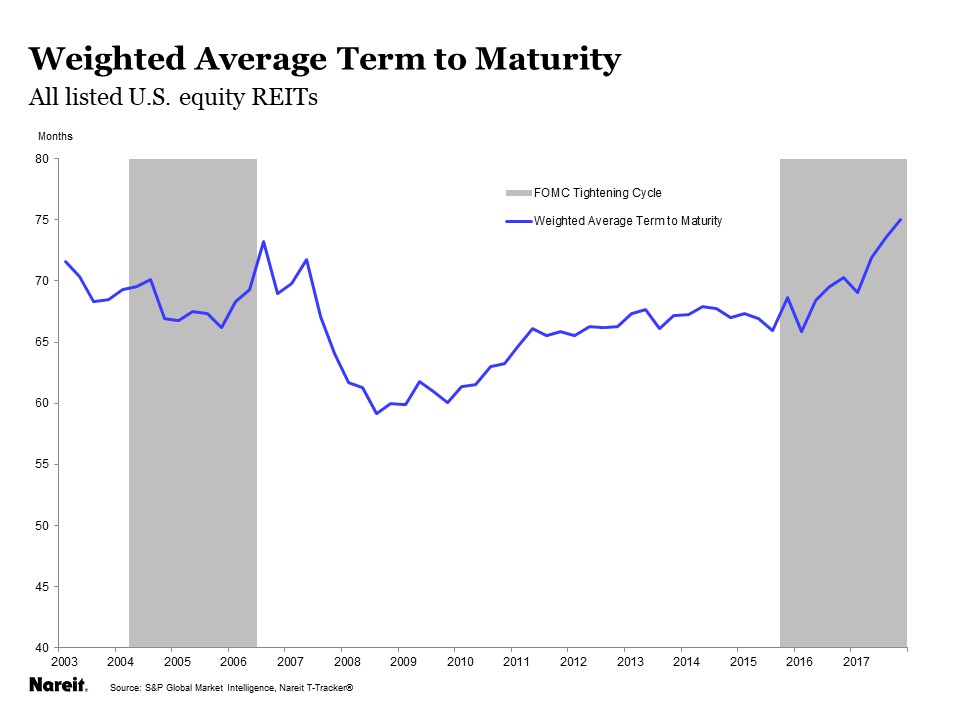 REIT share prices have at times responded negatively to the prospect of rising interest rates. REITs’ low leverage and low exposure to interest rate increases, however, suggest that REITs will continue to post good operating performance even as interest rates move higher. And the steady increases in REIT earnings translate into higher and higher dividend payments to investors. In the fourth quarter, total dividends paid by equity REITs and mREITs increased 4.5 percent, to $13.7 billion. 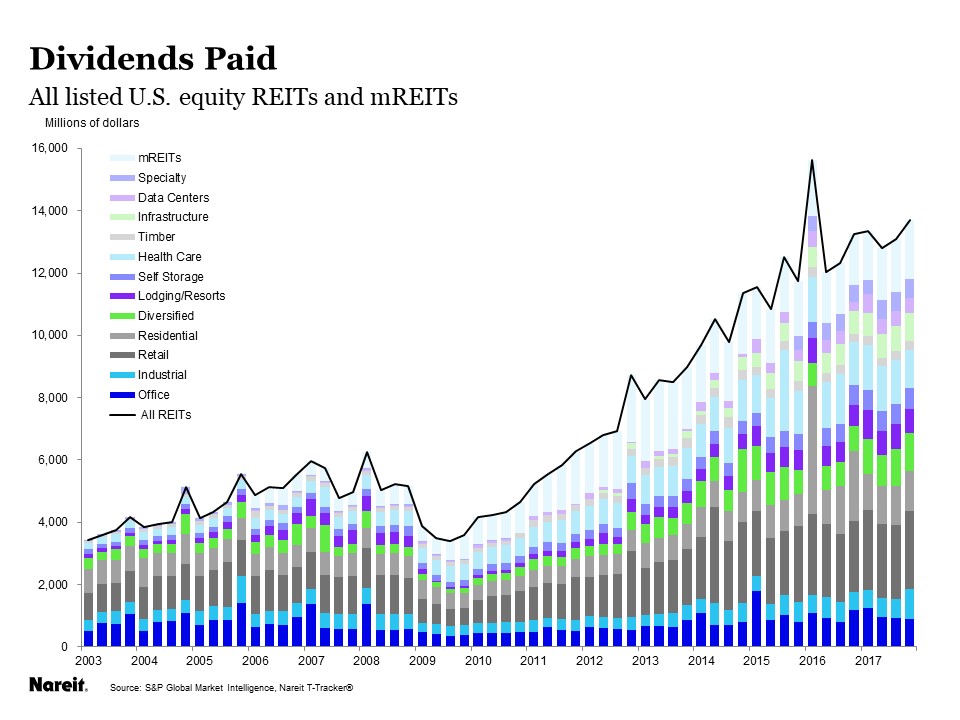