The Bureau of Labor Statistics (BLS) released the April 2022 Consumer Price Index (CPI) data showing a much smaller monthly increase in prices in April than in March. CPI increased 0.3% in April and was up 8.3% on a year over year basis compared to 8.5% annual rate for March. While energy and durable goods prices declined for the month, the uptick in prices for services excluding energy raises concerns about inflation becoming more wide-spread in the economy.

REITs have historically outperformed the broader stock market in periods of moderate and high inflation. One driver of this outperformance is that REIT net operating income (NOI), revenue from properties minus all reasonably necessary operating expenses, generally keeps pace with inflation. New operating data shows this continues to be the case. First quarter operating results for REITs from Nareit’s T-Tracker shows NOI was up 5.4% from last quarter and up 15.1% from the previous year, well outpacing the rate of inflation. Same store net operating income growth experienced its highest growth in almost 24 years at 8.4%, nearly meeting March’s 8.5% annual inflation and outpacing the April annual inflation rate. 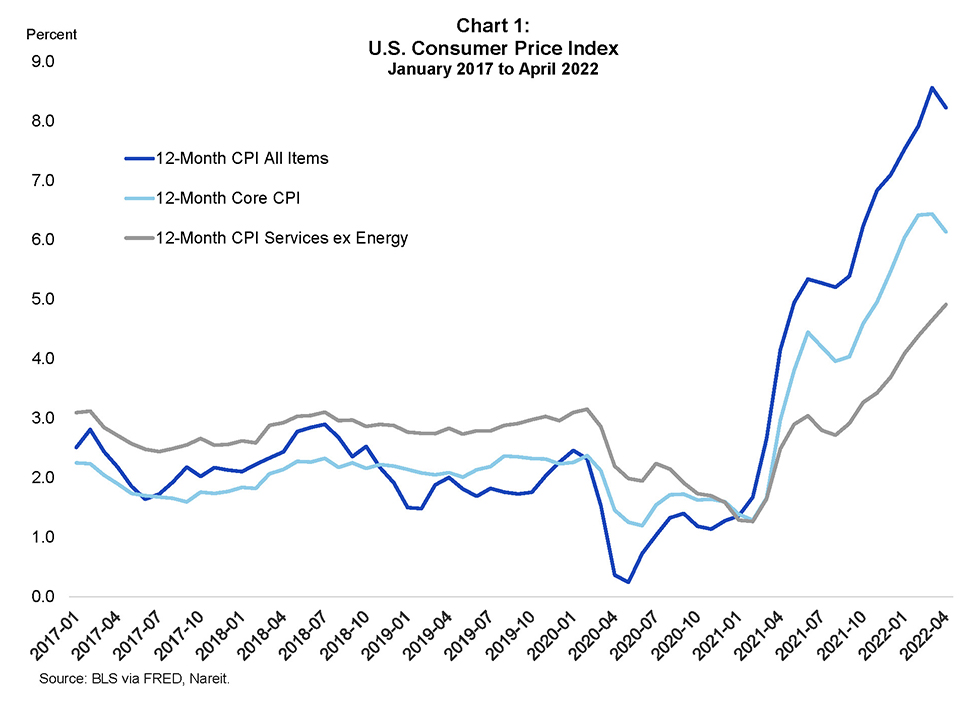 Chart 1 shows inflation for all items, core CPI which excludes food and energy, and services excluding energy. April’s decline in the annual inflation rate from March includes a decline in prices for durable goods—a sign that the supply chain constraints are starting to ease, albeit slightly. Energy prices also declined but seem to have mostly rebounded by the beginning of May. With continued war in the Ukraine, higher energy and gas prices are likely to persist. More concerning is the increase in services excluding energy prices. This measure grew by 0.7% in April and is up 4.9% over the past 12-months. The sharp rise suggests that the supply chain driven price increases are starting to spill over into other goods and services. 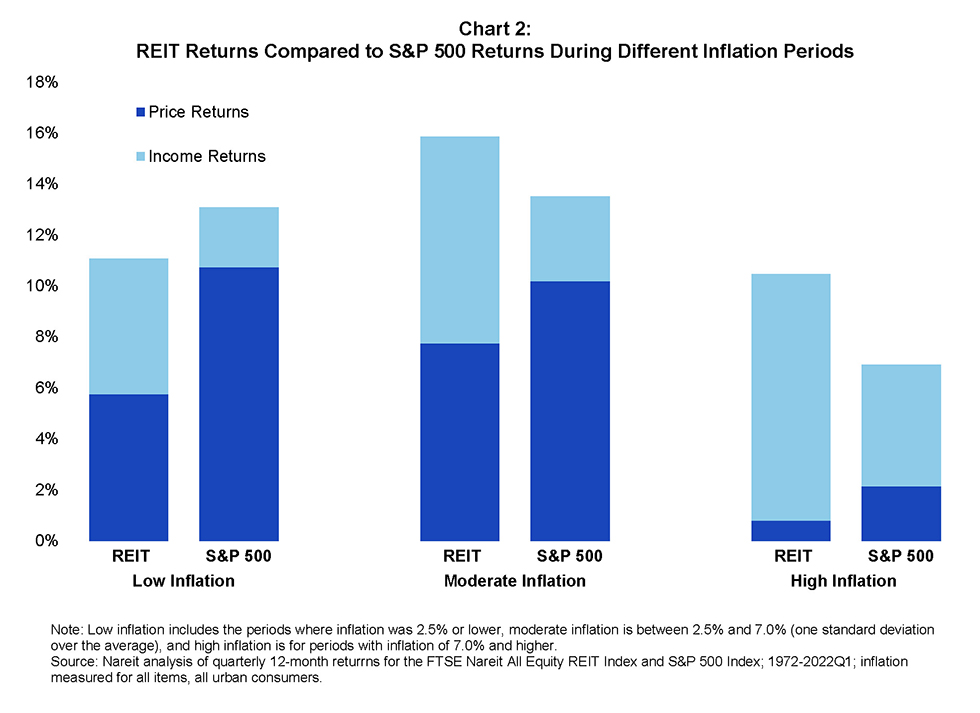 Twelve-month total returns for the first quarter of 2022 were 23.6% for REITs, outpacing inflation at 8.5% and the S&P 500 at 15.6%. Chart 2 compares 12-month returns of equity REITs and the S&P 500 measured quarterly during periods of high, moderate, and low inflation. High inflation is defined as greater than one standard deviation from the time period’s annual average of 3.9%, greater than 7.0%. Moderate inflation is between 7.0% and 2.5% (based on the Federal Reserve target), and low inflation is below 2.5%. REITs historically tend to outperform the S&P 500 in high inflation quarters, with strong income returns offsetting low REIT price returns. On average, REITs outperformed the S&P 500 by 3.5 percentage points during these periods. In periods of moderate inflation, REIT dividends more than compensated for the higher price returns on the S&P, leading total returns on REITs to exceed the S&P 500 by 2.4 percentage points. In periods of low inflation, REIT returns fall just below the S&P 500 as the income return does not fully compensate for the S&P 500’s superior price returns. 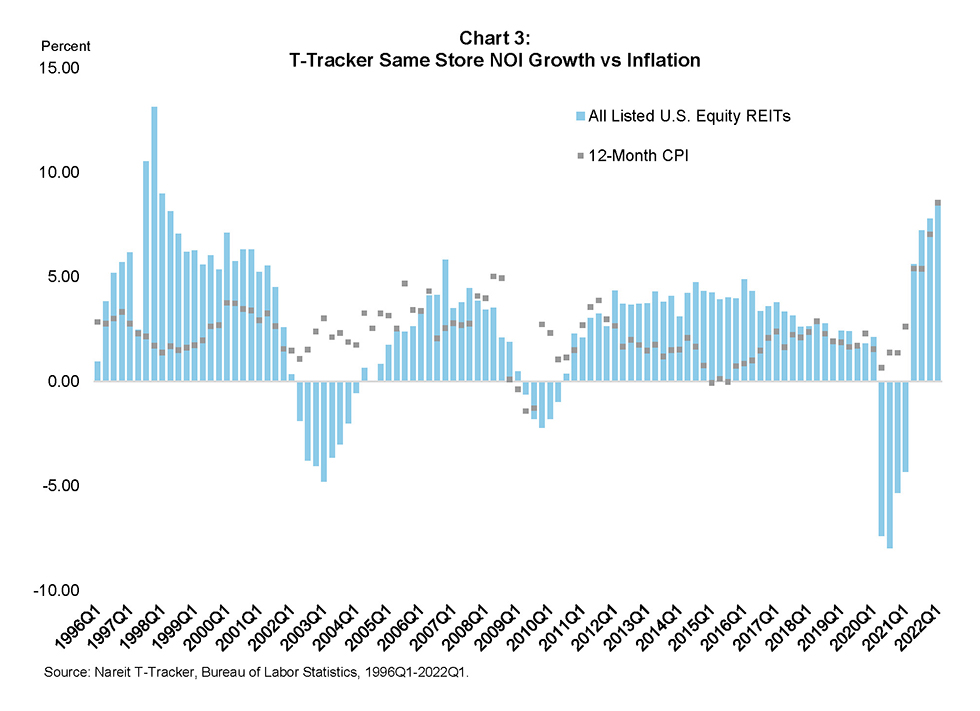 Same store net operating income (SSNOI) growth, in Chart 3, gives a conservative estimate of REIT operating income growth during different periods of inflation. SSNOI doesn’t include growth from acquisitions and the data are not available for some of the highest growth property sectors of the last decade—including lodging/resorts, timberlands, infrastructure, data centers, and specialty. Despite these limitations, annual SSNOI growth outpaced annual inflation in 63% of quarters from the first quarter of 1996 to the first quarter of 2022. REIT operating income is consistently higher during periods of higher inflation, SSNOI growth averaged 2.3% during low inflation periods compared to 3.6% in periods of moderate or high inflation. Annual growth in SSNOI was 8.4%, higher in the first quarter of 2022 than it has been since the second quarter of 1998. The rate was only 14 basis points lower than March’s annual inflation rate of 8.5% and outpaced the April annual inflation rate.