EY’s latest report, commissioned by Nareit, estimates REITs’ economic contribution to the U.S. as 2.35 million full time equivalent (FTE) jobs with $148.2 billion in labor income. This is the third consecutive annual report estimating REITs’ economic contribution. Chart 1 shows the increasing contribution from REITs to the American economy over the past three years as measured in FTE jobs. From 2016 to 2018, the jobs equivalent contribution from REITs is up an estimated 19.0%. This increase reflects both increased direct employment and investment and indirect and induced economic activity. REITs have steadily increased the number of properties they own, with double digit growth from 2016 in the data center, industrial, retail, and lodging property types. Lodging showed the highest increase in number of properties, up 24%. However, more traditional property types like office and residential saw small declines. This amounted to an estimated increase of 36,000 direct REIT employees. On the financial side, after REIT dividends dropped from 2016 to 2017, they surged over 21% from 2017 to $128.9 billion. 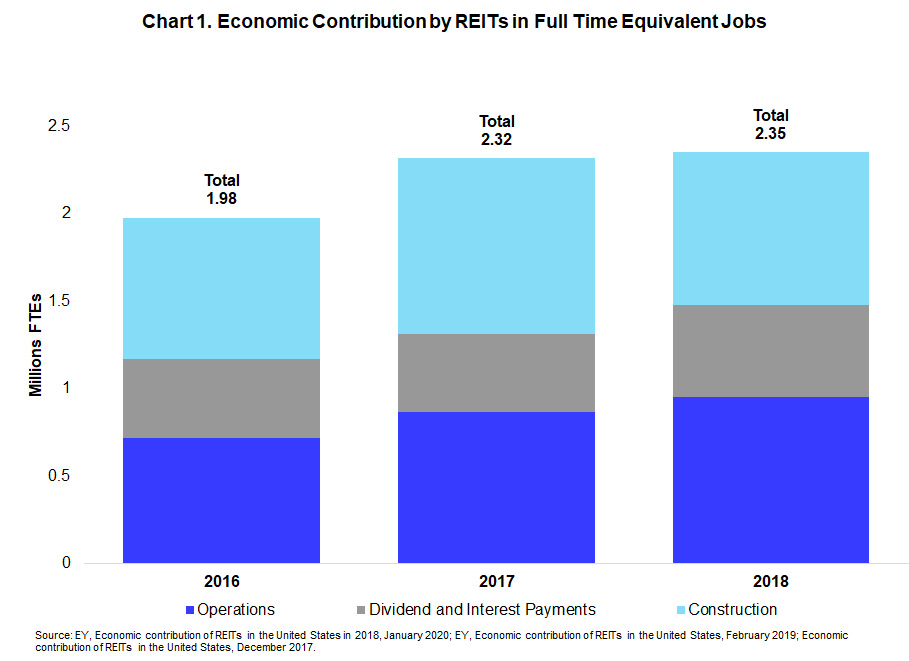 Comparing the 2018 estimate to the 2017 report, REITs’ domestic economic contribution as measured by FTEs increased by 2%, on par with inflation. As shown in Table 1, the overall contribution is comprised of 955 FTEs supported by REIT operations, 521 FTEs supported by dividends and interest payments, and 879 FTEs supported by construction activities, either new building or capital improvements to existing structures. The lower construction number in 2018 represents both a decline in construction of new buildings and an estimated decline in the value of routine capital expenditures. Because routine capital expenditures are estimated as a function of total gross asset value, the late 2018 broad market decline in gross asset values from 2017 is driving this change rather than a decline in maintenance or improvement activity. We expect this to rebound in the 2019 estimate.