Relative Valuations in the Public and Private Real Estate Markets

I continue to be surprised at the gaping difference between how real estate assets are valued in the public market and how essentially the same assets are valued in the private market.  In February I pointed out that, while the Federal Reserve Board and others had expressed concern about inflated values on properties in the private real estate market, the property valuations implied by stock prices for exchange-traded equity REITs were dramatically lower.

In April I was glad to see some evidence that the gap seemed to have started closing, as the timeliest measure based on property transactions—the CoStar Commercial Repeat Sale Index (CCRSI)—had started showing weakness in property transaction prices while its closest REIT analogue—a moving average of daily observations for the FTSE NAREIT PureProperty® Index over the previous 12 months—was showing renewed strength.

Those small signs of rationalization in the real estate market, though, don’t seem to have extended throughout the entire market.  The widely followed NCREIF Property Index (NPI), which summarizes mostly appraisals of properties held by institutional investors who are data contributing members of the National Council of Real Estate Investment Fiduciaries, measured an increase in quarterly gross total returns from 1.55% in 2017Q1 to 1.75% in 2017Q2 after having declined steadily over the previous eight quarters from an extraordinarily strong 3.57% in 2015Q1.  NCREIF members are generally pension funds or other large institutional investors, or at least the investment managers working for them, and their real estate portfolios—like those held by exchange-traded equity REITs—tend to be dominated by high-quality assets.

Institutional investors pay around 1% per year on an unlevered basis for plain-vanilla real estate investments, so appraised values were implying that institutional investors’ net returns at the property level averaged around 1.50% during 2017Q2.  That may not sound like much, and it’s not—after all, since the beginning of 1978, the average quarterly net return has been measured at 2.00%; in fact, 1.50% is exactly the bottom-quartile value, meaning that appraisal-based measures of price appreciation have implied stronger total returns during three-fourths of quarters over the past 39½ years, and weaker returns only one-fourth of the time.  So a 1.50% quarterly net total return wouldn’t be remarkable, except for the fact that private equity real estate already seemed so overvalued, at least relative to equity REITs traded on stock exchanges.

Chart 1 shows an update of my analysis comparing the NPI to a moving average of daily values of the PureProperty® Index over the previous seven quarters.  (Both indices measure gross total returns.)  Over the available historical period the two series have moved closely together with a correlation greater than 90%.  Intuitively, this makes sense: the NPI aggregates appraisals, and appraisers are amalgamating the same information about real estate market conditions that individual investors use to make buy/sell decisions regarding equity REIT stocks—but appraising is a really expensive and time-consuming, so it should be no surprise that the aggregate change in appraised values should very closely resemble (but lag significantly behind) the information already revealed through transactions in the more liquid part of the real estate market. 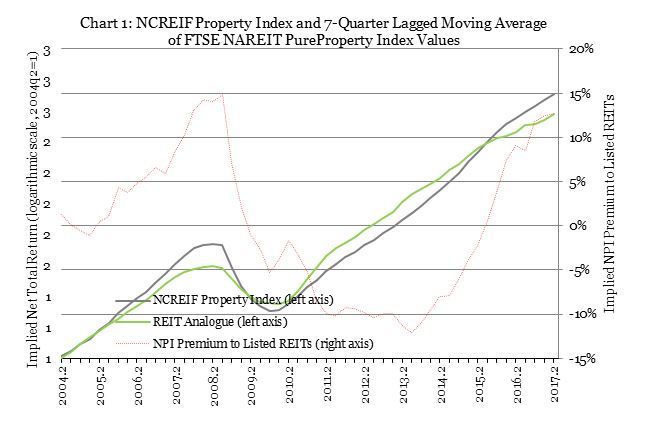 For the past five years, since mid-2012, appraisals on institutionally owned properties have been increasing more rapidly than the actual prices being paid for ownership shares in portfolios of very similar properties through exchange-traded REITs.  That was fine for about the first three years, because the NPI was undervalued relative to REITs: that is, appraisers hadn’t yet caught up to how healthy the real estate market was.  Over the last two years, though, appraisal-based estimates of returns have really blown past market realities.  As of 2015q3 (when I first started paying attention to the comparison) private real estate seemed to be overvalued by only about 0.6% relative to public real estate.  Private-market overvaluation (at least using appraisals to measure capital appreciation) first became noticeable in about 2015q4, when the discrepancy widened to 3.8%, but then it jumped to 7.5% in 2016q1, then 9.1% in 2016q2.  It pulled back a bit to 8.5% in 2016q3, but then surged through the next three quarters at 11.8% (2016q4), 12.5% (2017q1), and finally 12.7% in 2017q2.

Interestingly, NCREIF’s Transaction-Based Index (NTBI)—which also measures performance for the same group of properties, but does so on the basis of transaction prices actually paid rather than appraisal-based values—does not imply the same overvaluation that the NPI does.  Chart 2 shows the same analysis as shown in Chart 1, but comparing the NTBI to its closest REIT-based analogue, which is a moving average of daily PureProperty index values over the previous six (rather than seven) quarters.  The NTBI bounces around quite a bit (there are comparatively few transactions in the private real estate market), but over the past few years it has never implied private-side overvaluation greater than 9.7% relative to public real estate. 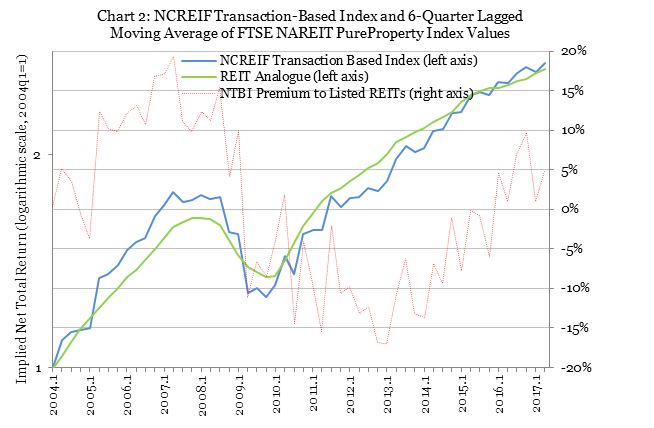 Once I noticed that discrepancy—that appraisal-based return measurement for institutionally owned properties differed sharply from transaction-based measurement of the same returns for a subset of the same group of properties—I realized the problem may simply be a gap between the appraised values that are being reported for these assets and the prices that are actually being paid for them.  Chart 3 compares the two ways of measuring total returns—appraisal-based (NPI) and transaction-based (NTBI)—for the properties in NCREIF’s data base.  The red line shows that returns measured using appraised values have been more buoyant than returns for a subset of the same group of properties—but measured using actual transaction prices—since 2015q3.  In fact, averaging together the figures for 2017q1 and 2017q2 (to iron out the jumpiness), the difference between appraisal-based and transaction-based returns measured for the NCREIF data base was 11.3%, which is pretty darn close to the 12.6% appraisal-based premium for private equity real estate relative to equity REITs traded on stock exchanges.

In other words, the available data suggest that the main reason that private equity real estate returns over the past two years have been so much stronger than public equity real estate returns is not because buyers have been willing to pay such aggressive prices for those properties (as reported by the NTBI)—it’s simply because submitted property appraisals (as reported by the NPI) have been so much higher. 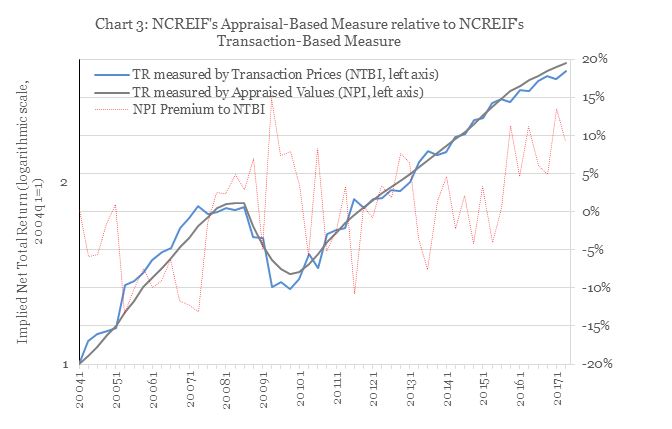 This may be a good time to emphasize that when I talk about “appraisals,” I’m not necessarily talking about valuations done by professional appraisers to the standards set by an organization such as the Appraisal Institute.  Many “appraisals” used to compute the NPI may actually be performed in-house by the investment manager: Cannon and Cole [2011], for example, pointed out that for the NCREIF data “most property managers do not pay for an external third-party appraisal each quarter.  Most managers perform such an appraisal only once a year, relying upon internal appraisals or no appraisals (where they simply carry forward the most recent appraised value, adjusting for capital improvements and partial sales) during interim quarters.”  In fact, there’s some empirical evidence from other illiquid asset classes—not including private real estate—that asset valuations, and the total returns implied by them, may serve a strategic, fundraising purpose: for example, Brown, Gredil & Kaplan [2016], speaking of private equity, noted that “managers may have an incentive to distort reported valuations if these are used by investors to decide on commitments to subsequent funds managed by the same firm” and concluded that “some under-performing managers boost reported returns during times when fundraising takes place.”

There are two possible inferences to draw from the results of my very simple comparison.  The first is to note that, when we look at the prices that buyers have actually been willing to pay for high-quality real estate, there’s not nearly as big a valuation discrepancy between listed and private markets as I had thought: in fact, the comparison between the NTBI and its REIT-based analogue is really pretty close.  The second inference, however, is that appraisal-based valuations in private real estate markets (as measured by the NPI) are being systematically reported at levels that exceed those of reported transactions (as measured by the NTBI)—in which case there may be more valuation risk in private equity real estate markets than many institutional investors realize.