Taking Advantage of Temporary Disconnects in the REIT Market

One of the most successful investment strategies, historically speaking, has been value investing: identifying companies whose stock prices have drifted too low, and profiting from the stock price recovery as the rest of the market begins to recognize the disconnect.  Benjamin Graham.  Warren Buffett.  Fama & French, who launched a thousand empirical studies showing, again and again, that stocks whose prices are low relative to various measures of “value” have persistently outperformed those that are termed “growth” stocks (which means simply that their high stock prices can be justified only by optimistic expectations for future growth).

The REIT industry as a whole can generally be considered part of the “value” part of the market.  REIT investors don’t have to rely on optimistic expectations (for drug approvals, new product acceptance, that sort of thing) because the REITs’ assets are easy to see and comparatively easy to value—but that doesn’t mean their stock prices can’t be beaten down to the point where they become even more attractive than usual.  Through the first week of August, two segments of the exchange-traded U.S. REIT market had dramatically underperformed the others: Retail REITs had posted total returns of -8.55% and Self Storage REITs had returned -6.11%, while the return for all equity REITs together (the FTSE NAREIT All Equity REIT Index) had averaged a much better +5.98%.  In a recent market commentary I showed that the yield spreads in those two segments—that is, their average dividend yield minus the yield on 10-year Treasury securities—had become much, much higher than their historical norms, suggesting that those two sectors may be the most undervalued segments of the REIT market.

The relatively low returns of Retail and Self Storage REITs during the first part of 2017 are—to say the least—not typical for either group.  Data for sector indices go back to the beginning of 1994, and over that period of just over 23½ years total returns have averaged +10.38% per year for Retail REITs and +15.69% per year for Self Storage REITs.  That’s much stronger, in both cases, than for the broad U.S. stock market, where total returns averaged just +9.45% regardless of whether you measure them using the Russell 3000 total-market index or the S&P 500 Index of just the largest companies.

Keep in mind, that kind of difference in average total returns over such long periods can make a big, big difference in total wealth: if you had been thinking about investing $1,000 in the broad stock market at the end of 1993, but you had invested it in Retail REITs instead, then your wealth would have grown by $1,868 more: that is, you would have ended up with $10,271 from investing in Retail REITs compared to only $8,403 from investing in the S&P 500.  In other words, you would have been 22% richer even though the average total returns differed by only 0.94% per year.  (Note: I’ve ignored expenses in this comparison, but there are low-cost ways of investing in both REITs and the broad stock market.)

I decided to see how that contrast—between long-term average returns and the returns we’ve seen during the first part of 2017, for Retail and Self Storage REITs—stacks up against other segments of the exchange-traded REIT market.  Of course, 2017 has been a poor year so far by REIT standards (and REITs have underperformed the broad stock market, especially its large-cap and growth segments): average total returns for REITs have been positive at +6.43% (FTSE NAREIT All REITs Index), but that’s a full 3.79 percentage points less than the long-term (since the beginning of 1994) average total returns of +10.22% per year for the U.S. REIT market.  But Chart 1 shows that Self-Storage and Retail are the only two segments whose 2017 YTD returns are more than 10 percentage points less than their long-term average returns.  That kind of disconnect should generally attract the attention of value-oriented investors. 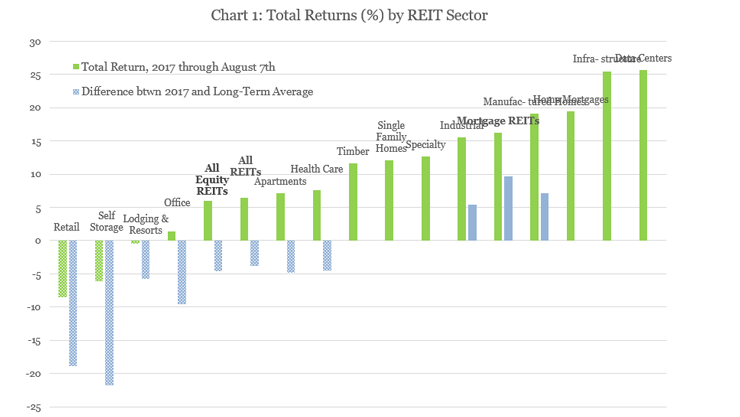 Another investment strategy that has been persistently successful is momentum investing: identifying companies whose returns have been particularly strong in recent months and “riding” a continuation of that trend.  There are three segments of the industry where total returns on REITs during the first part of 2017 have actually outpaced their long-term averages.  REITs that own Manufactured Home communities have been one of the best-performing segments of the U.S. REIT market since the beginning of 1994 with total returns averaging 12.05% per year, but during 2017 YTD they’ve exceeded that mark by 7.10 percentage points with total returns of 19.15%.  Mortgage REITs have returned 16.22% during the first part of 2017, bettering their long-term average by 9.63 percentage points.  And Industrial REITs, which have received considerable press thanks to the increase in demand for warehouse space from the rise of e-commerce, have seen YTD total returns of 15.55%, exceeding their long-term average by 5.45 percentage points.

Meanwhile, some of the best performances this year have come from segments of the REIT market that were not measured separately back in 1994 (or any time prior to 2000) and so don’t have any similarly long-term figure to compare with.  The best-performing sector of the U.S. REIT industry during 2017 has been Data Centers, with total returns of +25.70% just through the first week of August; Infrastructure REITs have been very close behind them at +25.50%.  Mortgage REITs that focus on home mortgages and home mortgage-backed securities have returned +19.46% over the same period, while REITs that own single-family homes for rent have returned +12.12%.  “Specialty” REITs that own assets such as document storage facilities, entertainment properties, and outdoor advertising have returned +12.63% during 2017 YTD, while REITs that own Timberlands have returned +11.58%.

Even when disconnects within the REIT market—in this case, situations where recent performance differs sharply from long-term average performance—may signal an investment opportunity, different investors will select different ways of acting on those opportunities.  Value-oriented investors will be drawn to those segments where recent performance has been most dramatically below long-term norms—currently those would be Self Storage, Retail, and even Office—on the theory that investors may have over-reacted to any bad news about those sectors, and an astute investor may therefore benefit from a reversion to the long-term average.  Momentum-oriented investors may instead be drawn to the opposite end of the spectrum on the theory that an astute investor may benefit from a continuation of strong recent performance: such investors would focus their attention more on the Data Center, Infrastructure, Home Mortgage, and Manufactured Home segments of the REIT market.

Many, many other investors, of course, will opt to reduce their analytical work load.  We’ve all seen that U.S. REITs have offered a pretty unbeatable combination of long-term returns, strong returns on a risk-adjusted basis, and powerful diversification over more than 45½ years since data started being recorded at the end of 1971.  If you want to sit back and simply enjoy those benefits—rather than trying to catch segments of the market when they’re about to bounce back from being undervalued, or when they’ve built up strong positive momentum—that’s okay, too.