What happened in stock markets following the Brexit vote was scary: listed equities in the U.S. fell by -3.65% on Friday, June 24 and by another -2.02% on Monday, June 27 according to the broad-based Russell 3000 stock index, before whipsawing back up by +1.82% on Tuesday, June 28.  Friday’s decline was among the worst 1% of one-day stock market losses since the beginning of 1999, while Monday’s decline put it among the worst 5%; after the partial recovery stocks were still down by -3.87% over the three-day period.

It was scary, that is, unless you were invested in exchange-traded U.S. Equity REITs.  Yeah, REITs declined on Friday—but the loss of -1.13% didn’t even make it into the worst 12% of one-day losses since the beginning of 1999 (the earliest date that daily returns are available from the FTSE NAREIT All Equity REITs Index).  Monday REITs held steady at just -0.03%, and Tuesday they recovered much more strongly than stocks, up +2.17% to finish the three-day period up by +0.99%. 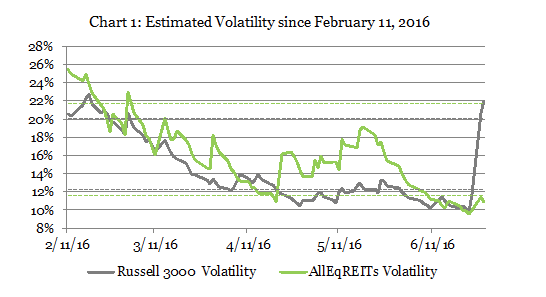 As you can see in Chart 1 (which updates my market commentary from May 13th), over the two market days following the Brexit vote U.S. stock market volatility more than doubled, from 9.9% (below its inter-quartile range) to 22.0% (above its IQR)—but U.S. REIT market volatility nudged up by barely one-seventh, from 9.6% to 10.9%.

My earlier market commentary pointed out the panoply of great news that REIT investors had enjoyed since early February: returns were up, volatilities were down, REIT-stock correlations were down, and REIT beta was down.  For REITs (but not stocks) the most recent update is better on all fronts: not only has REIT volatility declined—to a point where it is now below its lower quartile—but REIT total returns have held steady while the broad stock market hasn’t.  As Chart 2 shows, REIT total returns have gained 24.3% since February 11, whereas the broad stock market now stands up just 13.2%—meaning that REIT investors have nearly doubled the gains received by investors in non-REIT stocks. 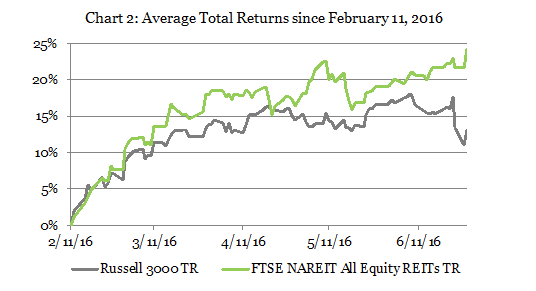 This is, after all, why asset class diversification—holding both Equity REITs (whose returns are driven by the real estate market cycle) and non-REIT equities (whose returns are driven by the business cycle)—is so important: events that affect one asset class don’t necessarily have any major effect on the other.  In this case, U.S. companies whose earnings are sensitive to developments in the global economy, especially Europe, suffered stock losses because of an event that is likely to have a major effect on the European economy—but the returns of U.S. REITs simply aren’t sensitive to the prospects for European macroeconomic growth. 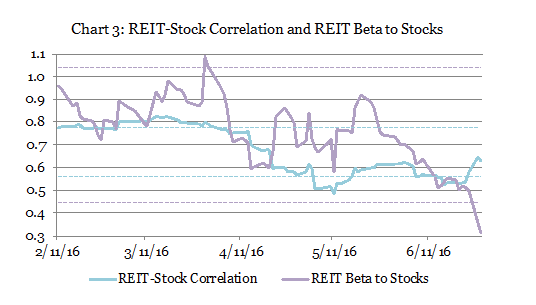 As shown in Chart 3, the post-Brexit turmoil actually increased the REIT-stock correlation (as shown by the blue line) from 0.535 to 0.631—still less than the median value of 0.67 since the beginning of 1999—but since the spike in volatility was almost entirely confined to non-REIT stocks, REIT beta relative to the broad stock market (as shown by the purple line) actually dropped dramatically from 0.52 to 0.31.  That means that REITs have accomplished the holy grail of investing, reducing the volatility of a stock portfolio while increasing its value too: for example, a portfolio evenly divided between exchange-traded Equity REITs and the broad stock market since February 11 would have seen 37% greater returns, but 9% less volatility, than a portfolio with no more than the standard market-cap weighting to REITs.

While the story may not always be quite as favorable to REIT investors as we’ve seen over the three days following the Brexit vote, the conclusions from my earlier market commentary bear repeating: That means that the combination of strong total returns (especially for listed equity REITs), low volatility, and low correlation has provided particularly strong diversification benefits over the last (now 4½) months for investors whose portfolios included substantial holdings of exchange-traded equity REITs.

In short, the diversification benefits of having listed equity REITs in your portfolio have hardly been better.