Performance in the quarter varied widely across property sectors, with significant increases in the industrial sector; more moderate gains at retail, residential, lodging/resorts, and self-storage; slight declines at data center, infrastructure, health care and specialty REITs; and larger declines in the office and diversified REIT sectors. On an annual basis, nearly every sector experienced FFO growth between 2020 and 2021. Only health care experienced a full year decline in FFO.

Operating performance improved with increases in occupancy rates across most property sectors.

“REITs have had an impressive recovery from the early stages of the pandemic, with FFO totaling a record $64.8 billion in 2021, up 24.6% from the year before,” said John Worth, Nareit EVP, research and investor outreach. “Strong balance sheets bolstered REITs’ resilience during the pandemic and leave them well-positioned for the likely higher interest rate environment ahead.” 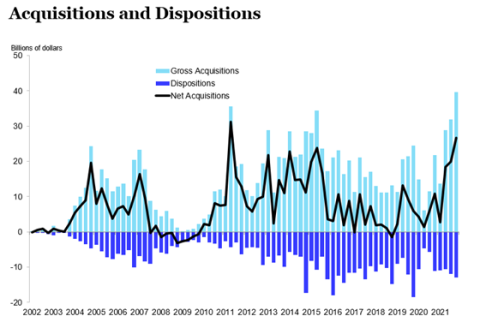 “Rising share prices have given REITs an attractive cost of capital to fund their record net purchases of income producing properties,” said Calvin Schnure, Nareit senior economist and SVP research and economic analysis. “REITs are investing in the future and expanding their footprint in commercial real estate markets.”

Sectors that were greatly affected by the pandemic continue to demonstrate recovery. After a slight dip in the third quarter, the retail sector reported a rise, and lodging/resorts reported their second straight quarter of FFO gains.

Dividends continue to lag compared to the recovery in FFO and were flat in the fourth quarter of 2021. Dividends remain 18.5% below the pre-pandemic level of $16.9 billion.

Occupancy rates increased due to robust demand for commercial space. The overall occupancy rate of REIT-owned properties rose 40 bps to 92.9% in the fourth quarter of 2021, up from a low of 89.7% in the second quarter of 2020.

The T-Tracker report includes several factors that demonstrate the resilience of the REIT industry, including: