WASHINGTON, D.C. (May 16, 2022) – REITs are well prepared for a higher interest rate environment, according to new data from the Nareit Total REIT Industry Tracker Series (T-Tracker®) report released today. The quarterly report also underscores REITs’ recovery from the pandemic; the new data show steady occupancy rates for all REIT-owned properties and record high funds from operations (FFO), including FFO that is above pre-pandemic levels for retail REITs.

“The data show that REITs are positioned to be resilient in today’s rising interest rate environment,” said Nareit Executive Vice President of Research and Investor Outreach John Worth. “The picture becomes even more striking when you compare it to the same data for REITs prior to the global financial crisis. In 2007, REITs saw leverage ratios as high as 45% of debt to market assets, interest coverage as low as 2.7 times, net interest expense as high as 38% of NOI, and weighted average term to maturity as low as 5.25 years, or 64 months.” 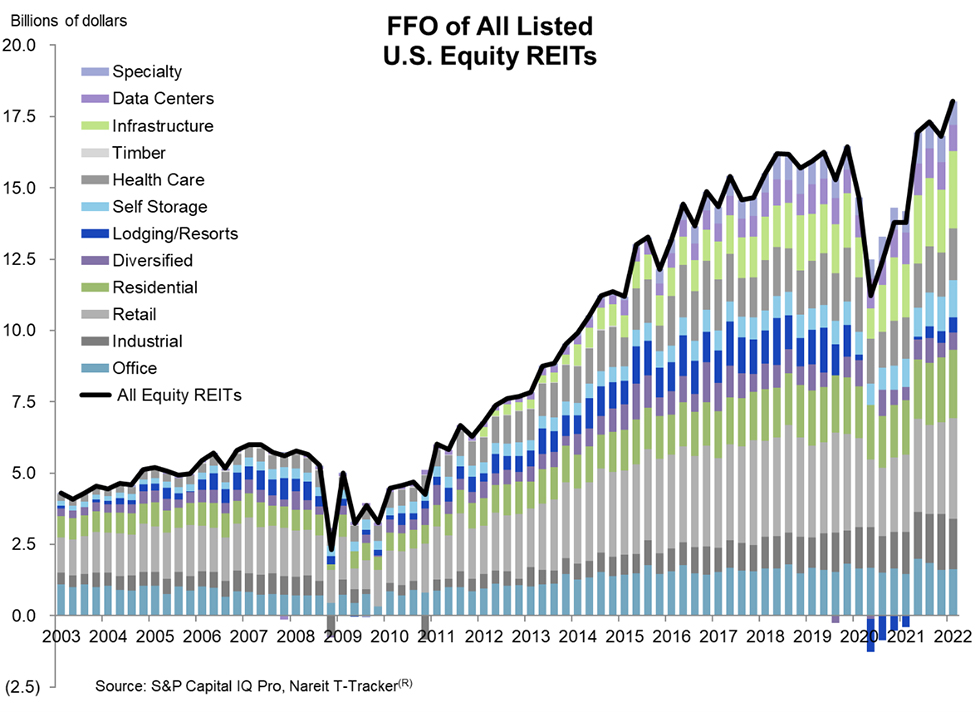 Apartment, industrial, and office REIT occupancy changed slightly from the previous quarter, with the apartment and industrial REITs increasing to 96.2% and 96.9%, respectively. Office REITs stayed the same at 89.6%.

FFO reached a record level at $18.0 billion—7.2% higher than last quarter. Many sectors significantly contributed to this growth, including:

Notably, the retail sector’s FFO reached pre-pandemic levels, and the increases in FFO for infrastructure and office follow two consecutive quarters of declining FFO for these sectors.

FFO for data centers, which is $898 million, is down from last quarter’s $971 million because of acquisition activity. Three REITs were purchased by private companies, and one was bought by another REIT causing them to exit the property sector. Without these exits, data center FFO would be up 5.0% for the quarter and 5.7% for the year.

“The story on REITs is one of recovery,” said Nareit Vice President of Research Nicole Funari. “This quarter’s data illustrates REITs’ steady climb back to pre-pandemic levels, particularly in the retail sector, which was hit hard by COVID-19.”

The T-Tracker® report details other data showing that: