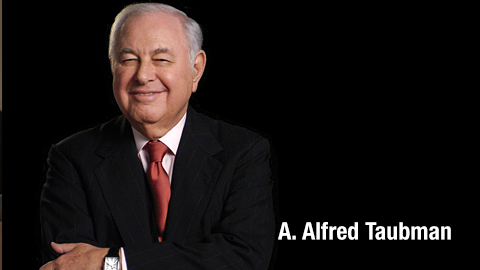 A. Alfred Taubman, the founder of Taubman Centers, Inc. (NYSE: TCO) who is widely credited with inventing the concept of the indoor shopping mall, died of a heart attack in his home in Bloomfield Hills, Mich., on April 18. He was 91.

Taubman started retail real estate development firm The Taubman Company, which eventually became mall REIT Taubman Centers, in 1950. Following the savings and loan crisis of the 1980s, the innovative initial public offering (IPO) of Taubman Centers in 1992 touched off a wave of REIT IPOs that changed the face of the real estate industry in the United States.

Taubman’s son, Taubman Centers Chairman, President and CEO Robert S. Taubman, announced his father’s death in a message to company employees on April 18. He noted that his father attended the opening of Taubman Centers’ The Mall of San Juan property in Puerto Rico in March.

“This company and all that you stand for were among the greatest joys of his life,” Robert Taubman said of his father in the note to Taubman Centers employees. “He was so proud of what this wonderful company he founded 65 years ago has accomplished.”

Alfred Taubman was born in Michigan in 1924. He served in the Pacific with the Thirteenth Air Force during World War II. Upon returning home from the war, Taubman worked for an architectural firm before founding The Taubman Company.

Taubman donated hundreds of millions of dollars over the course of his life to a range of philanthropic and civic initiatives, including a number of large donations to programs at the University of Michigan. Taubman also served as a director of a number of major U.S. corporations, including Chase Manhattan Bank of New York, United Brands and R.H. Macy Co.

He is survived by his two sons, Robert and William; his daughter, Gayle Taubman Kalisman; his stepchildren, Christopher Rounick and Tiffany Rounick Dubin; and his wife, Judith Mazor Rounick.