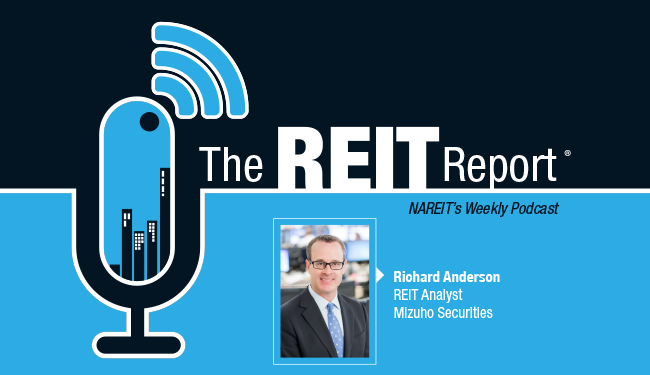 In the latest episode of The REIT Report: NAREIT's Weekly Podcast, Richard Anderson, REIT analyst with Mizuho Securities, offered his thoughts on the state of the office REIT sector.

Observers have speculated on the shifts in the office market for roughly a decade in the wake of the financial crisis. Anderson noted that the improved productivity in terms of how tenants use their space is also impacting office REITs. However, he said office REITs are shifting their strategies to meet the changes in the marketplace.

Anderson pointed out that the office business is generally driven by dynamics in local markets. “To paint the office sector with a broad brush, I think, is a really dangerous undertaking,” he said. Instead, Anderson said specific details, including strategies and geographies, are key to evaluating office REITs.

Office REITs are acknowledging the changing dynamics within the marketplace and “muddling their way through,” according to Anderson.

Total returns from office REITs grew 4 percent in the first six months of 2017, trailing broader market measures such as the S&P 500. Anderson said he doesn’t see a “catalyst” in the market to suggest the sector’s performance will improve substantially in the second half of the year.

“We have been leaning on the cautious side with the office sector” as the market evolves, Anderson said.

The office sector has witnessed significant deals done this year, such as Parkway, Inc.’s (NYSE: PKY) acquisition by a Canadian pension find and Government Properties Income Trust’s (NASDAQ: GOV) agreement to purchase Federal Potomac Realty Trust (NYSE: FPO). Anderson downplayed the likelihood that the deals will touch off more office sector transactions in the near term.

“For the time being, I don’t think of these two as representative of a broad thesis on the office sector,” he said. “They’re more targeted situations in two targeted markets that have had their share of difficulty.