While it might sound like the perfect condo, it’s actually a multifamily community owned by UDR, Inc. (NYSE: UDR), one of the nation’s largest owners and operators of apartment communities. The Denver-based company is putting a modern twist on rental living, which was once considered a pit stop before buying a home. Instead of a churn-quickly model, UDR is creating places where people of all income levels and backgrounds can experience a distinctive lifestyle.

“The rental market has changed a lot,” says Tom Toomey, who has been in the industry for more than 28 years, with the last 18 spent at UDR as president and CEO. A year ago, he became chairman of the company’s board. “We are creating more engaging communities that appeal to a wider range of renters for a longer period of life. Our residents at the Residences at Pacific City have a lifestyle not often available in a single-family home—they can visit the gym, walk to the beach, or watch football on an 18-foot TV while relaxing at the pool.”

UDR, which was founded as United Dominion Realty Trust in 1972, currently owns and/or operates nearly 50,000 apartment units in 20 of the nation’s largest markets, including Seattle, Washington, D.C., Boston, and New York. It offers both “A” and “B” communities in suburban and urban neighborhoods, which contributes to market, submarket, and price point diversification. Monthly rental rates at the Residences at Pacific City, for example, reflect amenities seemingly copied from a luxury spa. Rates at UDR’s nearby Eight 80 Newport Beach, meanwhile, begin around $1,500 less per month. “We need to provide a wide variety of price points to the marketplace to appeal to a wider pool of renters and achieve a sustainable return on our capital,” Toomey says.

The company’s portfolio is a sector-leading 96.9 percent occupied, according to financial filings. This compares with 95.2 percent for all multifamily units in the third quarter of 2018 and the long-run average of 94.8 percent, according to Victor Calanog, chief economist and senior vice president at Reis Inc. UDR’s top five markets read like a list of the nation’s most popular markets: Washington, D.C., Orange County, the San Francisco Bay area, New York, and Seattle, accounting for 19, 14, 13, 9, and 8 percent of third quarter same-store NOI, respectively. Given its presence in 20 markets throughout the U.S., the company also has exposure to Sunbelt locales such as Denver, Tampa, Orlando, Nashville, and Dallas.

Within its markets, UDR focuses on both urban and suburban sites where people want to live, work, and play. “Our residents care about the quality of their lifestyle and how they use their time,” Toomey says. “This industry has evolved from building non-descript boxes, to today, where residents have access to customized, high-quality finishes and amenities, to a future where technology and service levels will continue to deliver the lifestyles they desire on their own terms.” To help drive this experience, UDR continues to invest in its people and technology, with an eye toward the future and how residents will want to interact with their community.

For that reason, the company can charge rents that, in some areas, rival a mortgage payment. The average monthly amount paid by a UDR resident was more than $2,150 during the third quarter of 2018. Properties in San Francisco’s desirable Channel Mission Bay and the Chelsea neighborhood in Manhattan, where monthly rents start around $3,700 but can rise well above that, help to drive this metric higher. But, having exposure to lower-priced markets, such as Austin, where the company’s Residences at the Domain community has monthly rents starting at just under $1,300, brings balance to the mix.

“While U.S. apartments are a relatively mature and commoditized property type, UDR continues to do a solid job investing in and refining its operating platform to differentiate its value proposition for investors,” says John Pawlowski, who covers the company for Green Street Advisors. “UDR’s operating results compare favorably to most of its public and large private peers in recent years. Management’s ongoing focus on developing new technologies for its platform will likely continue to bear fruit for investors over time.” 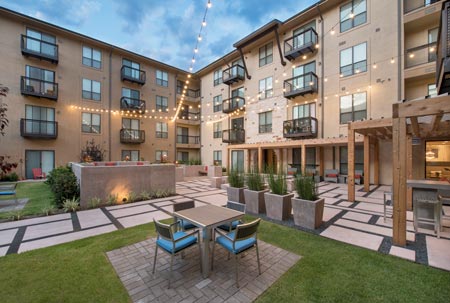 UDR’s portfolio of properties is slimmed-down, higher quality, higher margin, and better diversified from when Toomey took over in February 2001, which has driven an average annualized total shareholder return of 14 percent since then. In early 2008, the company sold roughly one third of its portfolio for $1.7 billion, exiting markets including South Carolina and Arkansas to focus on areas where job growth was luring younger people who viewed renting as a lifestyle. Proceeds from the sales—which came just before the financial crisis—were used to pare debt and to purchase and develop properties in higher quality and higher margin markets. Toomey says the deals were well-timed. “The price we could sell them for was higher than what we could build them,” he recalls. “2008 was definitely a prime window for selling those assets.”

Since then, demographics and societal preferences have supported the rental housing  in many of UDR’s markets. Tech-savvy millennials have favored urban, walkable areas over suburban sprawl. While many people continue buying homes, the housing crash reshaped the notion that owning a home is the only American Dream. The nation’s home ownership rate of roughly 64 percent is below the nearly 70 percent—or higher in some areas—seen in the run-up to the housing bubble, according to the U.S. Census Bureau.

More recently, a housing shortage, rising mortgage rates, and high student debt levels have further crimped affordability and made accumulating a down payment more difficult. This, when combined with UDR’s focus on resident satisfaction, has led to the company’s tenants staying longer, which has reduced turnover and helped the bottom line. Today, the average UDR resident is 38 years old and stays for 27 months. A decade ago, the average resident was 27 and stayed for 20 months, Toomey says. The reshaped company hasn’t gone unnoticed. “UDR’s portfolio bears little resemblance to the one it owned a decade ago,” Green Street wrote in a client note. “Its exposure to high-quality assets in gateway markets has increased dramatically. UDR’s diversified footprint should allow it to achieve sector-best top line growth in 2018 and 2019.”

Jeff Horowitz, global head of real estate, gaming, and lodging investment banking at Bank of America Merrill Lynch, says the move was wise. “They methodically shifted their focus out of a number of smaller markets, to focus on higher growth and quality areas where they’ve achieved real critical mass. They’ve done a consistently great job.”

Blueprint for the future

While some companies focus solely on quarterly results, UDR considers itself a full-cycle investment where long-term outperformance and resident satisfaction matter. “Our future success will be driven by our people, being at the forefront of technology, and pivoting our capital allocation as the market dictates,” Toomey says.

UDR’s blueprint for the future involves:

Adhering to these objectives has worked. Since February 2001, UDR’s annualized total shareholder return has come in at 14 percent, compared with 10 percent for the Nareit Equity Index and 6 percent for the S&P 500 Index.

Similar to UDR’s diversified approach to market selection, the company has found success in diversifying their approach to capital deployment by moving with the cycle. While the recent run-up in construction costs has made development economics more difficult, UDR has found success in other forms of investment, such as lending capital to third-party developers and increasing their focus on redevelopment and densification opportunities.

“Generating sustainable returns for our investors requires that we have multiple investment avenues to deploy capital into,” Toomey says. “Optionality and the ability to pivot are key to the success of our capital strategy.”

One aspect of UDR’s investment strategy involves building from the ground up, though the industry has shifted from a one-size-fits-all blueprint that can be plopped down in any market. These days, each development is created with its location and surroundings in mind, which adds to the price, but helps soothe local tensions. “Cities have become more involved in the design. It slows down the development cycle, but you do higher quality,” Toomey says. “I can’t think of anything that we’ve built that stands as a replication of the prior. Part of that is we’re better at listening to the customer, digging through the data, driving efficiencies, and finding the opportunity in the market.”

UDR’s development pipeline currently totals a little more than $800 million and is 98 percent funded, while its Developer Capital Program totals more than $250 million. Past projects have run the gamut from ultra-high-end communities located in desirable urban locales to workforce housing located in suburban areas near transit and job centers.

Since his appointment, Toomey has been praised for his deft guidance both at UDR and within the REIT space. He is active with Nareit, the National Multi Housing Council, and the Urban Land Institute, where he serves as global chairman.

“Tom is a close friend as well as someone I greatly admire. His team is the equal of any of the large apartment REITs,” says Terry Considine, chairman and CEO of Aimco (NYSE: AIV), a multifamily REIT based in Denver. “I do not think of UDR as a ‘competitor,’ although there are occasions when we compete for a particular property. More, I think of them as ‘friends’ from whom we can learn a lot even as we seek to match or surpass what they do.”

Horowitz at Bank of America Merrill Lynch adds that the UDR senior management team have “always been progressive and strategic thinkers focused on operational excellence, with the goal of long-term outperformance.”

When asked about a potential retirement, Toomey says he’s having too much fun with an evolving industry and company, though he’s mindful to have a sound succession plan.

“I’m not the 40-year-old CEO who came to this company 18 years ago. We have over time built a deep team, which I learn from each day. I enjoy working with them to implement new technologies and strategies into all aspects of our business and position UDR for the future. For me it is very intellectually challenging,” he says. “I’m excited to show up. I know I add value, so I really don’t have any desire to retire.”