Paramount Group Takes the Long View on the Office Market

Five years after the largest ever REIT IPO, the office REIT is focused on their three core markets.

As it closes in on its five-year anniversary as a public company, Paramount Group, Inc. (NYSE: PGRE) operates with the same focus, discipline, and ability to be nimble when an opportunity arises, that drove its success in the private markets for more than two decades.

Paramount owns, operates, manages, and redevelops class-A office properties in New York, San Francisco, and Washington, D.C. According to Chairman, President, and CEO Albert Behler, the REIT’s strategy is simple—focus on the best markets, the best assets, and provide superior tenant service. “We are a vertically-integrated platform with in-house capabilities in management operations and leasing, so our hands-on approach is what sets us apart,” he says.

Paramount was founded in 1978 by German entrepreneur Werner Otto. Behler, also German, held various leadership positions at Thyssen, the German multinational conglomerate, before joining the company in 1991. Prior to Behler coming on board, Paramount had owned properties in various asset classes around the country. Behler refined the company’s investment strategy to focus solely on class-A office buildings in gateway markets. Today, about 75% of its annualized rent is generated in New York, followed by  San Francisco at 20%, and Washington, D.C. at 5%.

“We remain disciplined within these markets and select the best trophy assets,” says Behler. He explains that tenants are competing for talent when choosing their space, “so we have deliberately positioned our portfolio where the talent pool desires to work.” Paramount also operates in markets with regulatory barriers, high replacement costs, or a combination of both, which keeps supply levels in check over the long term, he explains.

Haendel St. Juste, senior REIT analyst at Mizuho, points out that Paramount benefits from well-positioned assets and started the year with strong leasing momentum. “The growth profile for the next year looks pretty interesting, with cash flow growth of 12% versus 6% for the office sector and 5% for the REIT sector.” Wells Fargo analyst Blaine Heck adds that Paramount has been “laser-focused” on backfilling any space. “From an operational perspective, Paramount has done a solid job of addressing major move-outs and continuing to improve the quality of the portfolio,” he says. 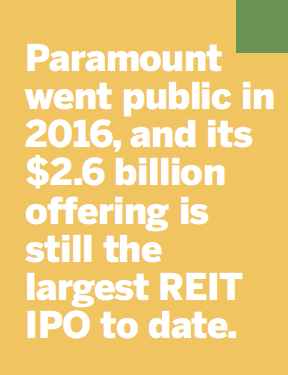 Behler says Paramount has racked up many accomplishments since going public at the end of 2014 in an IPO that raised a record $2.6 billion—the largest REIT IPO to date. They include: growing cash net operating income (NOI) by more than 15% and core funds from operations (FFO) per share by more than18%; leasing more than 5 million square feet; increasing portfolio leased occupancy to 96%; completing $5.5 billion of financing and refinancing activity; and selling three Washington, D.C. assets at full pricing while purchasing interests in three assets in San Francisco at prices “substantially below” replacement cost.

Despite its achievements, the performance of Paramount’s share price is not something that Behler had anticipated five years ago.

“When we took the company public we were expecting that investors would realize that this is a very unique opportunity to invest in high-barrier-to-entry assets and markets—that’s why the initial IPO was nearly four times oversubscribed. We were expecting the stock price would go up significantly,” Behler says.

Part of the issue, he feels, is that public investors are more short-term focused than private ones. Longer-term investors are more aware of what Paramount has achieved and seem to be patient, he says, “but it’s a difficult situation not only for us, but also our peers.”

Behler points out that Paramount signed leases for a little more than 1 million square feet in 2018 at mark-to-market gains of 13.3% on a cash basis. “These results clearly demonstrate not only the ability to lease a significant amount of square footage in core urban markets but also the ability to achieve very healthy positive rent spreads.” Observing that markets are not always rational, Behler adds that over the long term, “we believe our successful execution will be appreciated by investors.”

A recent Deutsche Bank commentary on Paramount notes that while there is “substantial NOI upside potential in the portfolio, the exact timing of when this upside will be realized is difficult to project on a quarterly basis, which could result in heightened trading volatility around earnings.”

One of Paramount’s core competencies, according to Behler, is its consistent and disciplined approach to capital allocation.

“We understand that the market presents us with an ever-changing menu of opportunities that are not mutually exclusive…we have demonstrated a capability and willingness to be flexible and nimble in order to maximize results,” Behler states. He points to a long history of selling fully-stabilized, lower growth assets, and recycling capital into higher growth opportunities to create value.

A good example of this is One Front Street in San Francisco, acquired through a 1031 exchange in 2016 when Paramount sold a 100% leased building in Rosslyn, Virginia. Behler recalls that at the time, buyers of stabilized assets in the San Francisco market were willing to pay over $1,100 per square foot (psf). Paramount, however, purchased One Front at approximately $800 psf. The building was 99% occupied with about 80% of leases due to expire in the coming five years and in-place leases that on average were 20% below market rates. “We found this opportunity for value creation where many other participants shied away from the leasing risk, since they traditionally lack the teams and experience to address the leasing efforts of 80% of a building,” Behler says.

An additional capital allocation option Paramount has pursued is to buy back shares. During 2018, the company “aggressively and opportunistically” repurchased about $105 million of its shares at a weighted average cost of $13.95 per share—“significantly below Wall Street’s estimate of our net asset value,” Behler says.

Joint ventures are another capital allocation option Paramount has favored. “For us, under the right circumstances, a joint venture structure can greatly enhance potential future returns,” Behler says.  The REIT recently added 111 Sutter Street in San Francisco to its portfolio via a joint venture. The building is currently 70% leased and existing leases set to roll over the next few years offer “significant mark-to-market opportunities. 111 Sutter is a fantastic opportunity offering attractive returns and the joint venture structure greatly enhances those returns to Paramount,” Behler says.

To increase the stability of the portfolio, Paramount has deliberately diversified its tenant base away from financial services and legal clients over the last couple of years. Today, no single tenant segment accounts for more than 25% of the portfolio.

Technology, advertising, media and information (TAMI) sector tenants are a core component of the portfolio, accounting for about 18% overall. “As TAMI tenants grow and mature they are not only looking for top-notch locations and amenities, but also the infrastructure our buildings provide, such as large floor plates for open layouts,” Behler observes.

In San Francisco, tech tenants looking for large floor plates don’t have much to choose from, he notes, “which is why our large block availabilities are highly attractive and sought-after in that market.” At 50 Beale Street a 262,000 square foot block, currently leased “well below market,” will become available at the start of 2020, Behler says. He notes that it is the largest big block currently available in the city over the next 12 months.

Looking ahead, Behler expects workplace design to continue to evolve: “Company culture and attracting the right talent are really being prioritized when it comes to designing workspace. It’s no longer enough for a company to claim a certain culture, organizations want their workspaces to reflect who they are.”

Sustainability and environmental efficiency are core to Paramount’s operating principles, Behler says: “We were early adopters of sustainability practices and did so for one simple reason—it was the right thing to do.” 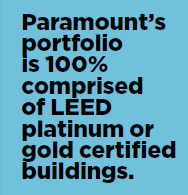 The initiatives Paramount has pursued and continues to advance have enabled “environmentally conscious and socially responsible surroundings that are prosperous, healthy, and improve the quality of life,” he explains. This approach has helped Paramount manage operating costs, attract and retain premium tenants, and ultimately enhance portfolio value.

Behler says Paramount is paying close attention to New York’s efforts to regulate environmental performance and views any thoughtful effort to lower carbon emissions as a constructive effort. “While we certainly feel that the spirit of the Climate Mobilization Act is a huge step in the right direction to reduce the carbon footprint of New York buildings, we think it still needs a fair bit of work.”

Paramount is the only REIT that boasts a portfolio of 100% LEED platinum or gold certified buildings, Behler says. “You don’t get those accolades if you are not laser-focused on sustainability initiatives.” Since Paramount prides itself in being best-in-class in terms of energy efficiency, Behler believes the REIT is well-positioned to comply within the timeframe the city mandates and “will work with the city to ensure the best outcome for tenants and the local economy.”