The Complex Flows of Foreign Capital 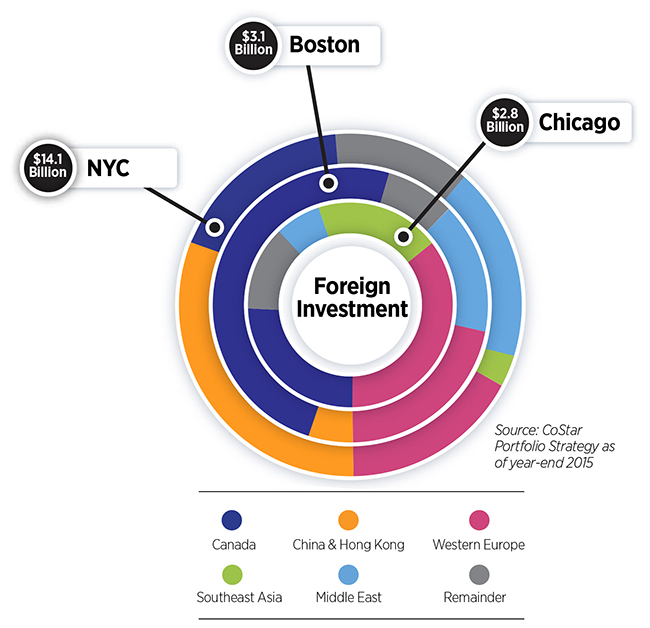 The world recognizes the superior safety of investing in the United States, where property rights are truly rights and forecasted growth is stronger than other advanced economies. Foreign direct investment in U.S. commercial real estate set a record high in 2015 at $70 billion, or about 12 percent of total trading volume. As higher trading volume generally drives asset values up, this trend has felt really good for U.S. property owners.

However, even with the recent relaxation of the rules governing cross-border investment in U.S. real estate, some of the countries investing the most in the past year may not be putting as much capital to work in 2016 and beyond. Middle Eastern oil barons, for example, are looking at an oil glut that could take years to work off. Meanwhile, despite the recent surge of activity by Anbang Insurance Group, large Chinese companies generally appear to be under pressure from the government to decrease overseas investment.

The effects of those investors cutting back on buying U.S. real estate would likely differ dramatically between the major markets across the country, demonstrating the importance of both where capital comes from and where it goes.

Of course, many investors, both foreign and domestic, want to buy in New York. The fact that some competitors have left town is not the end of trading activity; it just means fewer bidders and less upward pressure on values. (On the other hand, in Boston, another marquee real estate market, just 20 percent of total investment was from China or the Middle East; those investors won’t really be missed in Beantown if they stay on the sidelines.)

In contrast to New York, consider Chicago, where 61 percent of foreign capital invested in area real estate in 2015 came from Western Europe or Canada.

Yes, the Canadian economy is exposed to commodity values. It is also much more diverse than the economies of the Middle Eastern countries that have been pouring money into real estate in the Big Apple. That suggests investment demand for Chicagoland assets should be more stable going forward.

Moreover, only 12 percent of all commercial real estate investment activity in Chicago in 2015 came directly from foreign sources, versus 24 percent in New York. In other words, the Windy City is less exposed to foreign capital flows.

In summary, foreign capital flows are complex, and they can travel in more than one direction. Whether your boat gets floated depends on where the flows are from.

Hans Norby is a managing director with CoStar Portfolio Strategy.