REITs Attractive to Investors in Search of Dividends 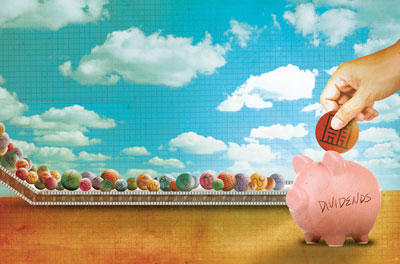 As the global population ages, the investing world’s appreciation for dependable income streams to fund retirement continues to grow. At the same time, economic uncertainty and global financial concerns are weighing on the stock market, making dividend-paying equities more appealing. Against that backdrop, REITs’ history of performance indicates they are sitting in a sweet spot for investors searching for hard-to-find, stable yields.

“It’s not surprising that REITs, which generally pay a healthy dividend, should be considered as part of any allocation strategy,” says Jason Yablon, global portfolio manager at Cohen & Steers. “You are potentially getting good current income with good inflation upside protection.”

In general, dividends certainly contribute to total return, having made up 29.7 percent of average total annual return of the S&P 500 over the last 40 years, when accounting for payment and reinvestment, according S&P Dow Jones Indices. Compare that with 59.9 percent for listed REITs over that same time period.

Over long periods, REITs have outpeformed the broad indexes in terms of dividend yields. Over each of the six years from 2010 to 2015, the FTSE NAREIT All REITs Index significantly outpaced the S&P 500 in terms of yields. At the end of each of those years, yields of Equity REITs, for example, ranged 151 to 220 basis points above S&P 500 yields.

In general, it’s a good time for dividend stocks, given higher market volatility. Even though the VIX, a measure of the market’s view of 30-day volatility, fell to 14 in mid-March, it has spiked above 30 three times since last August. (With the index, a measure above 30 means more investor fear and uncertainty, and below 20 translates to a less stressful outlook.)

In times of increased volatility, the market looks for safer plays such as dividend payers. “Right now we are in an environment where you have a higher risk aversion from investors,” says Jun Zhu, a research analyst and co-portfolio manager at the Leuthold Group. “That is good for dividend stocks.”

Currently, demand and supply fundamentals among REITs make a good case for investing in the stocks.

The job market remains strong, and growth in gross domestic product remains adequate, expected to grow 2 percent in 2016, according to Green Street. Low supply growth in most real estate sectors will help maintain growth of net operating income at about 4.1 percent among the group of apartment, mall, industrial, office and strip-center REITs, according to Green Street. Also, REIT stock valuations traded in February at an 11 percent discount to the private-market value of their real estate assets, offering a value play as long as property prices hold or rise.

That makes REITs appealing as part of an income-generating portfolio for James Morrow, a portfolio manager of Fidelity Equity-Income Fund (FEQIX). “When REITs get interesting to me as a generalist [are] when they can add yield, they present decent capital appreciation opportunities and act as volatility dampeners.”

Furthermore, other above-average yield plays have had their drawbacks lately. Energy-related MLPs have been one area offering decent yields, but dividends of 10 percent and higher mean many investors expect cuts in part due to the troubled oil and gas sector. Junk bonds have been another area despite their recent rebound, since the markets could once again worry over possible defaults in energy.

The big psychological hurdle for investors in dividend stocks is worry about interest rates, Zhu notes. The general perception is when rates are rising, dividend-paying stocks become less appealing, but historically they have held their own. Among periods of Federal Reserve tightening since 1954, dividend payers outperformed non-payers 10 out of 17 times, says Zhu, citing research from AFAM Capital.

Gauging the Ability to Pay

When it comes to dividend stocks, a key consideration is the sustainability of the payouts. If a company cuts its dividend, it ends up punishing stock prices.

Energy shows how a sector disruption can lead to dividend cuts and large drops in stock prices. For example, Teekay Corp., an oil and gas shipping company, this year cut its dividend 90 percent. Its stock was trading in mid-March around $9, about a third of its value from early December.

REITs had their own dark days back in the financial crisis. Few REITs avoided having to cut their dividends, as many of them went through recapitalizations. Looking back, only 20 of 138 Equity REITs have either maintained or increased dividends over a 10-year period ending in December 2015, according to BMO Capital Markets. The group cut dividends by roughly 40 percent in 2009, adds Yablon of Cohen & Steers.

Going forward, however, the cuts allowed REITs to work from a much lower base in terms of payouts. Since then, REIT dividends have grown along with earnings and cash flow. These days, this means reassuring coverage ratios, with an industry average around 66 percent of their funds from operations (FFO).

REITs are required to pay out a minimum of 90 percent of taxable income under tax rules, but for Equity REITs, there’s some breathing room that allows them to vary the actual payout relative to cash flow because taxable income is determined by subtracting depreciation as a non-cash expense. Paul Adornato, managing director at BMO Capital Markets, says today’s industry average payout ratio is at a conservative and sustainable level.

“There’s a very big gap and a lot of leeway between the statutory requirement and a conservative payout in terms of cash flow,” he says.

The market for REITs is much more stable than the rough period six years ago, making dividend payouts more reliable. Underlying economic fundamentals on balance appear to be steady, Knott says, though in general more development coming on line needs to be watched.

“Demand-supply relationships favor landlords, but not by a huge margin,” he says. “REIT property cash flows are expected to continue growing. Coupled with a moderate coverage of existing dividends from after-cap-ex cash flow of about 130 percent, investors should consider dividends of Equity REITs to be quite safe at this time.”

REITs could likely play an even bigger role in dividend-centric portfolios later this year when Equity REITs are separated out of the Financials Sector into a new Headline Real Estate Sector of the Global Industry Classification Standard, the leading global listed equity classification system maintained by MSCI Inc. and S&P Dow Jones Indices.

“The GICS reclassification will shine additional light on the REIT sector,” Adornato says. “Once they are broken out separately, then portfolio managers will need to pay more attention to the group.”

Where Investors Are Finding REIT Dividends

Fund managers and market watchers see a variety of potential sources of dividend income within the REIT market.

James Morrow, who manages the Fidelity Equity-Income Fund (FEQIX), currently likes the health care REIT sector. Focused on value, he also looks for REITs generally outside of tier-one cities. And despite higher valuations in the storage space, Morrow sees long-term value and appreciation potential there.

Sectors such as self-storage, manufactured housing, and apartment REITs have lower dividends, paying in the 2 percent to 3 percent range. Yet, these sectors offer strong fundamentals and seem most likely to have their dividends rise the fastest, adds Michael Knott, director of U.S. REIT Research at Green Street Advisors. “They all have a solid combination of expected cash flow growth and healthy coverage of existing dividends,” he says.

Yablon of Cohen & Steers also looks for value in stocks with good fundamentals and decent yields. Retail power-center REITs offer opportunities, as does the data center space, in part due to growth trends such as outsourcing of storage and cloud computing. “We think there [are] some secular growth drivers there,” Yablon says.

“You are really making much more of an interest rate bet in those instruments than you are in a more traditional property REIT,” he says.

As such, Morrow likes the high yields of the residential mortgage REITs.

Another option in the space is commercial mortgage REITs, notes Jade Rahmani, an analyst at Keefe, Bruyette & Woods. The group offered an average yield in the 8 percent range at the end of 2015, according to FTSE NAREIT numbers.

“We are advocating a selective approach to the commercial finance REITs,” Rahmani says. “Several of them offer compelling dividend yields.”