In 2018, Housing Partnership Equity Trust (HPET) bought a 1980s-era apartment building in the San Francisco Bay area. The acquisition of Quail Run in suburban San Leandro, about 10 miles south of Oakland, has preserved affordable housing for more than 100 families in one of the country’s priciest real estate markets.

HPET’s Quail Run acquisition is just one example of how REITs are helping to move the needle on a national dilemma that has grown worse in recent years: the shortage in many markets of workforce housing—also referred to as affordable housing—for low-to-middle-income Americans.

“Our typical tenant may be a working mom with two kids. She’s got a good job, perhaps as a home health care aide, a profession that’s in high demand. She’s doing something we all rely on and needs an affordable place to live near public transit, good schools, grocery stores, parks, and other amenities. If she has that, her family thrives. If she doesn’t, nothing else works,” says Anne McCulloch, CEO of Washington, D.C.-based HPET, which owns nearly 3,000 units of affordable housing. Its properties generally serve households earning 50 to 80 percent of the area median income in their respective markets.

A social-purpose REIT that partners with nonprofits to acquire affordable and sustainable rental housing, HPET bought Quail Run for $24 million in partnership with Eden Housing, one of California’s leading nonprofit developers and operators of affordable housing.

The 104-unit property was renovated in 2002 using federal low-income housing tax credits. It no longer receives federal benefits, but much of the property is still subject to affordability requirements and will continue to serve families earning about half the area median income. For a two-person household, the area median income is about $83,500. 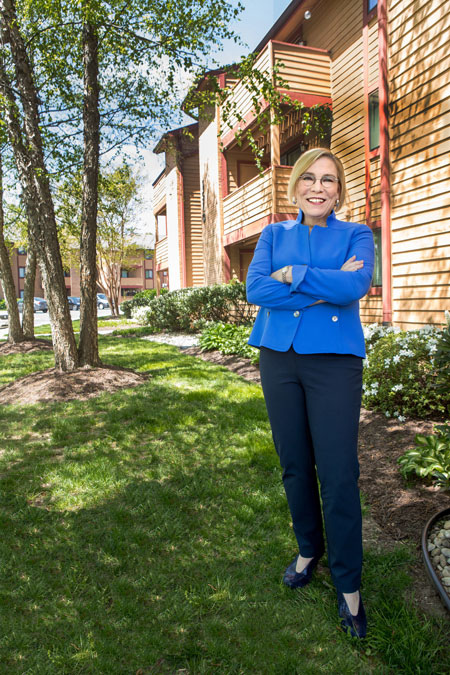 HPET and Eden have set aside $750,000 for improvements to the property and are working with the local housing authority to offer housing there to families using Section 8 housing vouchers. The federal Section 8 program helps millions of low-income Americans offset the cost of renting in privately owned properties. Many private landlords in San Leandro don’t accept its vouchers because of the strong demand for apartments.

Rents Rise; Incomes Not So Much

The shortage of workforce housing has a lot to do with the fact that incomes have risen at a slower pace than rents in many places. During the recovery, many cities have seen a boom in multifamily housing development, but steep construction and land costs have led many developers to focus on high-end properties.

John Pawlowski, a senior analyst at Green Street Advisors, points out that “land prices have increased to the point where it’s tough for the development of affordable housing to pencil [out].” He notes that for most of the current real estate cycle, shareholders “have applauded the shift toward coastal footprints, where land cost barriers are high.”

Nationally, the rental housing stock has been shifting to higher-cost units, according to the study. A net 2.5 million units priced at less than $800 per month in real terms—affordable to households earning up to $32,000 annually—were lost between 1990 and 2016.

“Affordable housing concerns are coming to a head in a lot of cities and states. The political pressure will build until the cycle breaks and rents go down,” says Pawlowski. “If the economic cycle isn’t a release valve, it will be politicians and voters who have their say.”

“Rents have gone up faster than many people’s incomes. So, you have this mismatch,” says Merilyn Rovira, senior vice president for capital initiatives at Community Development Trust (CDT), which, like HPET, is a private REIT focused on long-term investing in affordable rental housing across the country.

CDT, however, takes a hybrid approach—making both equity investments in acquisitions or developments and making or buying mortgages used for the same purposes. The company, based in New York, partners with for-profit and nonprofit groups that have extensive experience in affordable housing.

Since its founding in 1998, CDT has created or preserved more than 47,000 units that provide homes to nearly 120,000 residents in low- and moderate-income communities. The company seeks to invest in properties where at least half the units are rented to families earning no more than 80 percent of the area median income.

“There is a wide range of income bands that need more affordable housing and are paying an increasingly high percentage of their incomes toward housing,” says Brian Dowling, CDT’s chief investment officer.

Late-cycle dynamics are also making it harder for low- and moderate-income families to afford apartments, according to Dowling. Over the last couple of years, investors have increasingly sought to acquire market-rate, class-B multifamily properties and reposition them to serve higher-income renters, he says. Such properties have long been a source of affordable housing for moderate income families who don’t qualify for any sort of rental assistance.

“There has been a considerable amount of new rental property construction [in recent years], but a lot of that new construction has been on the high-end” of the multifamily market, Dowling explains. Many of those buildings were strong investments, but that market is limited. So, the next place a lot of investors look is to value-add opportunities, he explains.

“You have folks earning between 60 and 100 percent of area median income in many markets who are being priced out and contributing a higher percentage of their incomes toward their housing costs,” says Dowling.

CDT has been working to address the issue by acquiring the types of class-B properties that have become increasingly attractive to value-add investors hoping to squeeze more income out of them. Last year, for instance, it partnered with the Hispanic Housing Development Corp. to acquire a 200-unit property, called Arrowhead Apartments, in the Chicago suburb of Palatine. Twenty percent of the units there are reserved for low-income tenants under a project-based Section 8 contract, and the remainder are market-rate apartments. “We have a double bottom-line philosophy: We need to provide a return for our investors, but we have our mission, which is to provide capital to preserve and create affordable housing,” says Rovira, whose firm has paid out more than $120 million in dividends since its founding.

While HPET and CDT are mission-driven REITs, other REITs have helped to boost the nation’s supply of workforce rental housing simply by virtue of the property types in which they invest.

Take Reven Housing REIT (NASDAQ: RVEN), for instance. Reven—which owns and operates nearly 1,000 modest, single-family rental homes in the South—got its start in the aftermath of the housing crisis, when CEO Chad Carpenter saw an opportunity to capitalize on escalating rental demand and attractive acquisition opportunities.

Rather than compete with larger investors for acquisitions of distressed, high-end homes, Reven hitched its star to workforce housing, acquiring relatively small, stabilized portfolios of single-family rental homes in the suburbs of major markets.

“It was a simple business decision” to buy workforce rental homes, explains Carpenter. “I make higher yields and don’t compete with those guys,” he says, referring to investors with deeper pockets who focused, during the downturn, on buying individual, high-end homes and converting them to rental properties.

“Our renters are firefighters, nurses, police officers, or people who work in manufacturing,” for instance, says Carpenter. “They’re good people who work hard, pay the rent, and rent for a long time.”

Recently, La Jolla, California-based Reven expanded its focus to include buying newly built rental homes for working families. Last year, it closed on a newly-developed, stabilized portfolio of rental homes in Memphis, Tennessee, and it plans to do a similar deal in Birmingham, Alabama.

While high housing costs in big cities have gotten plenty of attention lately, there is also a strong need for workforce housing in many rural areas, says Sam Landy, president and CEO of UMH Properties Inc. (NYSE: UMH), an equity REIT that owns and operates more than 115 manufactured home communities in rural parts of the Northeast and other regions. 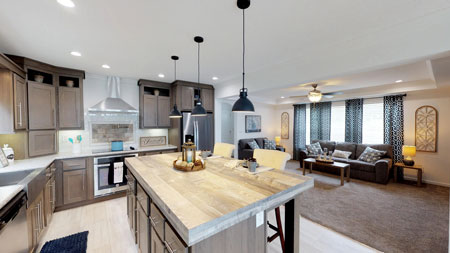 Such communities aren’t a viable affordable housing solution for high-density urban areas because of the steep land costs in such markets, says Landy. But in rural areas, UMH is able to offer high-quality, low-cost housing for families earning just $30,000 to $50,000 per year, he says.

Landy’s father founded UMH, based in Freehold, New Jersey, in 1968. Since then, manufactured homes have come a long way in terms of quality and energy efficiency, he says. “Over a 50-year period, the product has improved to be better than anybody could have imagined. It lasts longer and is more affordable [than ever],” says Landy.

UMH rents homes in its communities and also sells them to qualified buyers through a wholly-owned taxable REIT subsidiary. Lately, the company has focused on the rental market because more-stringent lending requirements (enacted in the wake of the financial crisis) have made it harder for lower-income Americans to get loans to buy manufactured homes. In Memphis, Tennessee, for instance, UMH is developing its first all-rental community, called Memphis Blues, where monthly rental prices start at $695 for a two-bedroom home and $815 for a three-bedroom unit.

In the Northeast, zoning restrictions have made it challenging for UMH to develop new manufactured home communities, says Landy, who argues that such policies have only exacerbated the shortage of quality, affordable housing in rural markets. UMH, he says, is working to challenge the restrictions through litigation and other measures.

Landy points to the vital role UMH communities play in such rural areas as Orrville, Ohio, where it houses many factory workers employed at the headquarters of the J.M. Smucker Co., the iconic American manufacturer of fruit spreads and other food products. “We provide brand-new homes for rent and for sale starting as low as $700 per month in that market,” Landy says.

REITs that own manufactured home communities play a vital role in the affordable housing market, Pawlowski says. He notes that they serve a wide range of lower-income Americans—from boomers who have downsized, as is the case with Equity LifeStyle Properties, Inc. (NYSE: ELS), to blue-collar families having difficulty saving for down payments, as with Sun Communities, Inc. (NYSE: SUI). “Manufactured housing is one of the most affordable types of rental shelters you’ll find anywhere in the country,” he says.

As Equity Lifestyle notes in its 2018 annual report: “Positive trends in categories such as customer demographics, the quality of manufactured home construction, and limited property supply, among others, fuel our belief that our properties are well-positioned for the future.”