The Evolution of American Homes 4 Rent

For American Homes 4 Rent, what started as an experiment has evolved into a thriving single-family residential REIT.

The aftermath of the financial crisis that roiled global markets from 2007 to 2010 brought numerous changes to the housing landscape of the United States, including the rise of institutional investors purchasing single-family homes for rentals. Once the province of mom-and-pop investors, the single-family home market began to see large-scale companies enter the segment to provide much-needed, well-maintained rental housing.

In the summer of 2011, David Singelyn, now the CEO of American Homes 4 Rent (NYSEMKT: AMH), and Wayne Hughes, founder of Public Storage (NYSE: PSA), bought a few houses in Las Vegas as a test case to see if they wanted to create a business focused on single-family home rentals. Singelyn says that year was a turning point in the residential real estate segment.

“First, home prices dropped, but second, and just as important, tech advances reached a point where it was easier to access data like school information and demographics to make investment choices,” he says. “At the same time, there was an opportunity to invest in a management platform and a tech platform to better serve renters.”

American Homes was one of the first single-family rental REITs. Today, American Homes owns about 50,000 homes in 22 states, most of them purchased individually. The REIT owns houses in Texas, Arizona, Las Vegas, Georgia, the Carolinas, Tennessee, Florida, Chicago, Indianapolis, as well as other markets.

A rocky start didn’t hamper the company’s growth, according to John Pawlowski, an analyst with Green Street Advisors.

“In late 2015 to early 2016, [American Homes] refined its operating platforms and figured out how to cut costs, so there was a significant opportunity on both the revenue and operating side,” Pawlowski says.

Even though home prices have risen, American Homes is creating opportunities for growth by reducing operating costs, increasing rents and consolidating their market share. “American Homes has been disciplined, buying homes at the right price and focusing on yields, rather than just on getting a high rent,” says Haendel St. Juste, an analyst with Mizuho Securities.

Trends in the make-up of the U.S. population and tastes in housing are priming the market for single-family residential REITs such as American Homes.

According to the 2017 State of the Nation’s Housing report from the Joint Center for Housing Studies (JCHS) of Harvard University, about 43 million households are renters. That group includes more than 80 million adults and 30 million children. The report shows that the renter share of U.S. households now stands at a 50-year high of 37 percent, up more than 5 percent from 2004.

“Homeownership has been delayed because of the financial difficulty of saving for a down payment and because people are getting married and having kids later,” says St. Juste. “Single-family home rentals can coexist even if homeownership increases because there’s pent-up demand for houses.”

According to the JCHS report, the share of families living in rental housing jumped from 32 percent in 2005 to 39 percent in 2016, accounting for 22 percent of the renter household growth over this period. The JCHS says the share of households opting to rent appears to be stabilizing around 37 percent this year. But since millennials, the largest generation, are entering their 20s and 30s and forming households of their own, JCHS projects solid growth in renter households over the next 20 years.

“The homeownership rate is close to a 50-year low, which tells us that demand in the near future for single-family rentals will be strong,” says Daren Blomquist, senior vice president of communications for ATTOM Data Solutions, a property data provider. “People are not becoming homeowners as much as they used to, so even when they form households, they are renting instead.”

“Some people think the level of homeownership has reached the bottom, but others think it will drop further,” says Singelyn. “Affordability could get worse if mortgage rates rise significantly, but there are also social and behavioral trends that could mean millennials won’t want to own homes as much as prior generations.”

Affordability concerns are caused by rising home prices, which are tied to the lack of supply and slow wage growth.

“The U.S. still has a housing shortage, with the number of household formations outpacing the housing stock,” says Singelyn. “There’s a 10-year backlog of fewer single-family homes being built.”

Higher home prices make it harder for investors to get the yields they need, but American Homes has capital on hand to acquire houses even at market rate if necessary. Rents can be raised in response to higher housing costs.

“The sweet spot for institutional investors is a location with good underlying economic strength as well as affordable housing to buy or build,” says Blomquist.

American Homes looks closely at data for specific neighborhoods, not just on the city or regional level, to identify communities that will be profitable for single-family home rentals.

“We look for areas with good rental demand, with immigration and employment growth and neighborhoods that we know will attract long-term tenants,” says Singelyn. “We look for newer homes in neighborhoods with good schools because we want to attract families. A lot of our tenants have been with us since we started.”

So far, the average length of stay for an American Homes renter is around three years.

As more time passes since the financial crisis, the economics of the housing market continue to change. That has led to modifications in the strategies of American Homes and other companies in the single-family rental segment.

“Even though home prices are more expensive, we’re seeing good yields because we’re able to increase our rents and our cost of capital is down,” Singelyn says.

“There’s a big price difference now when AMH acquires homes,” says Pawlowski. “Back in 2013 and 2014, they could buy foreclosures at a 15 percent discount off market prices, but now the discount is largely gone. The good news is that operating costs are so much better and rent growth is better, which offsets the difference on the acquisition side.”

Blomquist says institutional investors, while not snapping up properties at the rate they did after the housing crisis, are taking the opportunity to keep their best-performing assets and improve their operational performance. For its part, American Homes has invested in technology to create operational efficiency.

“We have a ‘Let Yourself In’ program that provides instant gratification for people interested in renting a home, since they can go into an empty property without needing to wait for someone to meet them,” says Singelyn.

He also points out that American Homes’ level of customer service has recently increased significantly.

“We answer all calls immediately and get back to people within 24 hours or less, so we provide greater satisfaction for our tenants,” says Singelyn.

Even as it works to improve operating performance, building greater scale remains a primary objective for American Homes. Singelyn says that he wants to drive external growth by adding $1 billion in new housing stock to the company’s portfolio by 2018.

“We have relationships with several developers to buy homes from them,” says Singelyn. “These are new homes that have been built specifically to match the long-term maintenance needs of rentals.”

Singelyn says they get a better yield from newly constructed houses since the builder sells them at a small discount. New homes command a higher rent since they are in demand. American Homes also recently began to build their own rental houses.

“By building the homes ourselves, we can acquire them at a 15 to 20 percent lower cost since we’re not paying the developer,” says Singelyn. “Right now this is less than 10 percent of our business, but we hope to grow it.”

St. Juste says acquiring newly built houses makes sense, but he thinks building homes is a riskier endeavor. “So far, American Homes is doing this on a select basis, so we’ll watch to see how that develops,” says St. Juste.

Singelyn says American Homes spent more than $300 million from January to July on new acquisitions. While American Homes primarily purchases homes individually, the company has shown a willingness to snap up portfolios of multiple assets as well. The single-family residential REIT bought Beazer Pre-Owned Rental Homes in 2014 and has purchased some smaller portfolios from individual investors.

“There are lots of small to midsize single-family investors with 1,000 to 2,000 homes who are willing to sell their portfolio, given that it can be a painful proposition to operate that many properties,” says St. Juste. 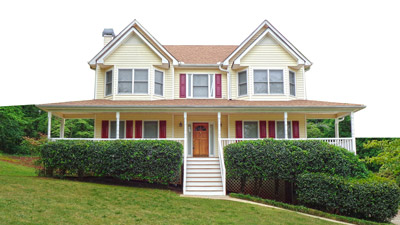 Speculation about the single-family residential segment lately has turned to the potential for consolidation. In August 2017, Invitation Homes (NYSE: INVH) and Starwood Waypoint Homes announced an agreement to merge to create one of the largest institutional investors in single-family home rentals with about 82,000 homes.

“The advantage that big public companies have is that they operate with larger, more sophisticated platforms,” says St. Juste. “They also have a cost of capital advantage.”

“American Homes has a great balance sheet, with $1 billion in liquidity and low leverage,” says St. Juste. “They are in a good position should the right deal come along.”

With cash on hand and a solid operating platform, American Homes is poised to adapt to shifts in the housing landscape.

Single-family home rentals have been around a long time as homeowners occasionally opted to rent out their property and individual investors purchased properties for cash flow, says Haendel St. Juste, an analyst with Mizuho Securities. As an institutional segment of the REIT industry, single-family residential housing has really only existed since 2012.

“Relative to other property sectors, the single-family home rental sector is in its infancy,” says St. Juste. “These REITs have grown their margins and grown their operations, and they have moved past initial concerns about efficiency.”

The youth of the single-family rental sector means there’s room for growth, even as the sector moves beyond the start-up phase. Today, single-family residential housing REITs only own about 1 percent of the rental homes in the United States.

“We’re in a late inning for external growth for the single-family home rental sector, but it’s very early in the game for internal growth through operations improvements,” says John Pawlowski, an analyst with Green Street Advisors.

However, St. Juste thinks there’s some room for external growth as the REITs acquire more properties, although in smaller chunks than after the foreclosure crisis.

“The single-family home rental market will get bigger, but at a much slower pace than we’ve seen since 2012,” says Pawlowski. “It will grow at an outsized pace compared to other property sectors, but it won’t double in size.”

St. Juste says the single-family rental REITs, such as American Homes, are focusing now on developing depth and scale in particular markets.

“There’s additional synergy in owning more properties in any one market,” he says. “The more you own, the more you can rely on contractors and suppliers to work with you.”

St. Juste says the single-family home REITs are well-positioned to continue to grow, particularly American Homes, which he says has investment-grade ratings and access to capital that will make it even easier to expand.