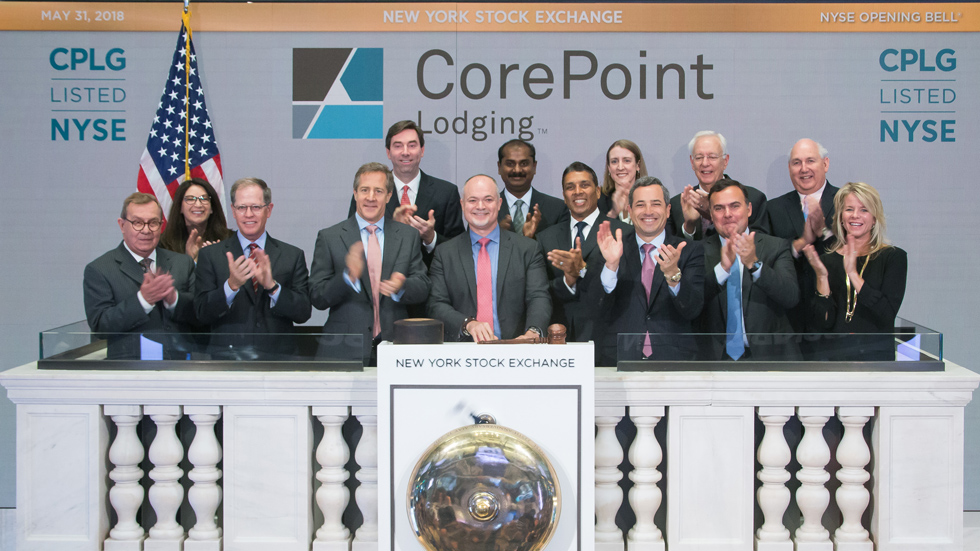 CorePoint began trading on May 31, following the REIT’s spinoff from La Quinta Holdings Inc. With the transaction, La Quinta separated its hotel real estate from its franchise and management business—which was subsequently sold to Wyndham Hotel Group. CorePoint owns 316 hotels, all of which are managed by Wyndham and almost all operate under the La Quinta brand.

“We wanted to become a REIT because we recognize the value embedded in the La Quinta brand,” says Keith Cline, president and CEO of CorePoint and former president and CEO of La Quinta Holdings. “We’re a compelling proposition because we’re the first pure-play select-service hotel owner with a differentiated focus on midscale and upper-midscale hotels.”

“REITs usually invest in upscale hotels, with a few invested in select-service hotels. That does make it harder to value CorePoint when there aren’t any great comps,” Bellisario says. “La Quinta hotels are in ‘everywhere USA,’ when REIT investors are used to hotels in places like New York, San Francisco, Washington, D.C., and Boston.”

Prior to the spin-off, La Quinta was aggressively pursuing a three-prong strategy, says Cline, including driving consistency in product, outstanding customer service and customer engagement with the La Quinta brand.

“The first two components of that strategy drove their intended outcomes,” he says. “We could control that because we owned the assets and we were able to increase revenue per available room (RevPAR) by increasing occupancy rates, driven by service and product quality. But to unlock the full potential of our 316-hotel portfolio, we needed some type of consolidation transaction to give us scale, distribution power, loyalty, and reach.”

A handful of REITs own select-service hotels, such as Apple Hospitality REIT (NYSE: APLE), Hospitality Trust (NASDAQ: HPT), Summit Hotel Properties (NYSE: INN), and RLJ Lodging Trust (NYSE: RLJ), so there’s some precedent for owning some of the more premium select-service properties, says Simon Yarmak, a managing director with Stifel. However, he says, CorePoint’s properties are lower down the economic scale with comparable rates below those at the properties owned by other REITs.

“The size of this market is impressive—through the end of 2017, midscale and upper-midscale hotels are almost a $34 billion segment in our industry and yet it has a highly fragmented ownership structure,” Cline says. “We’ve strategically chosen to focus on these assets because we know them, they’re an attractive part of our industry, and because a lot of other public players are not competing for this segment.”

CorePoint’s initial strategy includes completing the renovation of a group of 54 hotels that were previously identified as ripe for repositioning, as well as reopening 500 hotel rooms that were impacted by hurricanes Harvey and Irma in 2017. All the hurricane-affected hotels are expected to be fully operational by peak travel season in 2019, Cline says. 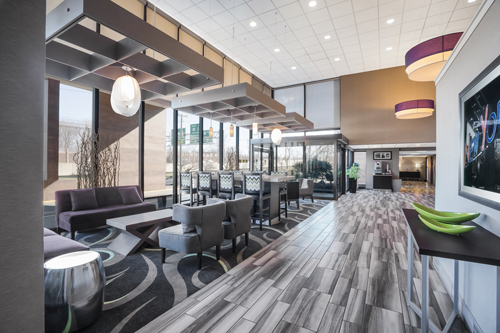 “There’s definitely traction in the midscale market segment because consumers want an affordable, clean place to stay with some amenities when they’re on vacation near the beaches of the Gulf of Mexico or on a road trip,” says David Guarino, a senior associate with Green Street Advisors. “And midscale hotels tend to have longer visits. CorePoint’s renovation strategy is a good value proposition because we’re seeing a healthy leisure market.”

Brand-name hotels with good amenities in the midscale to upper-midscale segment are putting pressure on higher-priced hotels, Guarino says. A family visiting Manhattan is more likely to choose a less expensive suburban location than an upscale hotel that charges $400 to $500 per night.

CorePoint’s moves are meant to drive both leisure travelers and price-sensitive business travelers to their hotels.

“The renovations are more than just putting lipstick on the rooms,” Cline says. “We’re transforming these properties internally and externally, completely reskinning the outside, putting in new lobbies, new fitness centers, and adding hot breakfasts. We’ve got a director of sales working on corporate accounts for these newly reopened hotels to change the guest profile and drive both occupancy and higher rates.”

More than three quarters of the 54 hotels in the initial repositioning package have reopened.

“These essentially were midscale hotels that were sitting on street corners in upper-midscale markets,” Cline says. “When you compare RevPAR for those hotels with 2016—skipping over last year’s renovation disruptions—RevPAR was up nearly 20 percent, driven primarily by rate but also by market share.”

More Dots on the Map

Following this year’s integration with the Wyndham platform, Cline says the benefits of the alliance will become apparent in the first quarter of 2019.

“Wyndham is the largest owner of midscale and economy hotel brands with [more than] 9,000 hotels, and they have a much larger loyalty program than La Quinta,” he says. “We believe incremental revenue increases will come from our integration into their distribution platform.”

In addition, Cline anticipates future cost benefits from the efficiencies of scale.

“From the customer perspective, affiliation with Wyndham means more dots on the map when they’re looking for a hotel,” Bellisario says. “The bigger brand means more price points and more offerings in the loyalty program.” 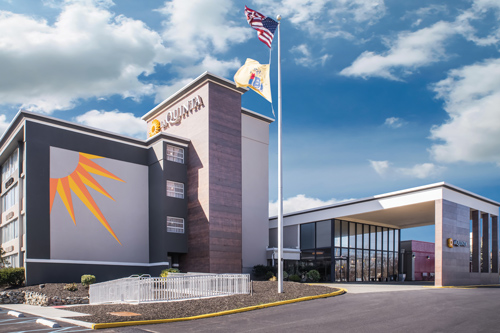 CorePoint anticipates growing RevPAR this year because of its newly renovated hotels, the reopening of hurricane-damaged hotels, and its Wyndham association.

“Our RevPAR is up three percent for the first half of 2018,” Cline says. “We’re in a unique position and we’re continuing to gain market share.”

Demand among leisure travelers has been surprisingly resilient, says Bellisario, and is being buoyed by low unemployment as well as rising incomes, stock portfolios, and consumer confidence. Individual business travel has seen more modest demand growth, he says, in part because hotel prices have been going up. He says this could benefit the La Quinta brand as well as other midscale hotels that appeal to price-sensitive travelers.

STR [formerly Smith Travel Research] is projecting hotel demand to be up 2.4 percent this year and 2 percent next year, according to Yarmak. “There’s demand for mid-scale hotels even in urban markets because there’s a segment of travelers with budget constraints. The La Quinta hotels are economical and offer free breakfast and free internet. Plus, there’s demand for these hotels when they’re located off the highways and byways from truckers, construction workers, and people who are relocating.”

CorePoint expects to add to its portfolio, which currently has about 40,500 hotel rooms across two-thirds of STR’s market tracts, with a concentration in the Sunbelt and higher growth markets. For now, CorePoint owns a single brand of hotels, but that may change.

“This is uncharted territory to have a single-branded REIT,” Yarmak says. “All the other REITs own multiple brands, such as Marriott, Hilton, or Hyatt. Even the REITs that own select-service hotels have brand diversity.”

“As we grow our business we absolutely plan to diversify both geographically and with different brands,” he says. “Our holdings today are more than 70 percent midscale and upper-midscale, which is where we’ll mostly stay. For any new opportunities, though, we’d look at operating metrics and performance more than a specific price point. We’re focused on the quality of the assets, their location, and their performance.”

Hotels in “everywhere USA” tend to be performing better than some of the upscale hotels in urban locations, Bellisario says. He anticipates that CorePoint will successfully be able to push their rates higher due to their hotel locations, as well as providing consistent quality for customers.

“If interest rates rise due to an improving economy, hotels should do well because more people will be traveling,” Guarino says. “Hotels are a great place to be in a good economy because they can change their pricing daily in response to market conditions.” 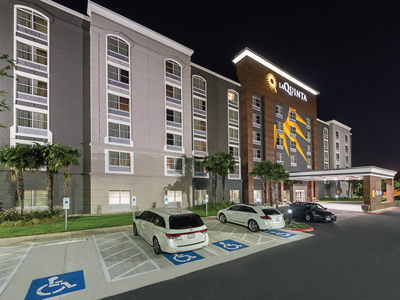 Now that the U.S. economy is nine years into its recovery, some economists predict the next recession to hit in 2020 or 2021. While Cline says he always anticipates how they will handle a shift in the economy, he thinks it’s hard to speculate about a recession.

“In this industry, when you look at significant impact on demand, it’s always been tied to a macro event such as a war or the dot.com bust or 9/11,” Cline says. “That’s one thing that keeps us up at night: thinking about how we can control what we can’t control. If the economy behaves, we’re expecting to experience continued RevPAR growth. If there’s an outsize economic shift, we’ll look at what to expect in terms of demand. We’ll make sure we have the right balance sheet and mentality around growth to make sure we can manage the business through those events.”

CorePoint’s balance sheet construction isn’t that dissimilar from other REITs even though the company is only months old at this point, Cline says.

“Looking at the long game, it’s always prudent to maintain a conservative capital structure,” he says. “We’re focused on preserving liquidity and minimizing short-dated securities. Certainly, we want flexibility with what we can do with our balance sheet. It’s also important for us to maintain a well-covered dividend so it’s properly sized given the needs of the business.”

The bottom line, Cline says, is that while CorePoint invests in a different market segment than other lodging REITs, just like any other REIT it’s focused on enhancing its capital investment and assets.

“This team is committed to driving profitability through effective asset management to improve cash flow, enhancing asset repositioning, and pursuing growth in diversification with an eye toward building a strong and flexible balance sheet,” Cline says.