Extra Space Storage hits a growth milestone and showcases a modernized sector that continues to expand.

Back in 1998, Joe Margolis’ job at Prudential Real Estate Investors was to find companies worthy of the capital that would get them to the next level. He was offered a meeting with a small self-storage operator with big ambitions, and he remembers thinking: “No way, it’s not an institutional asset class. We would never invest.”

Despite those initial reservations, Margolis liked the business model and the growth projections he saw and today he is the CEO of that company, Extra Space Storage, Inc. (NYSE: EXR). The REIT is a sector giant that has doubled in store count since 2013 and recently hit a growth milestone as it celebrated onboarding its 2,000th facility.

The top five self-storage REITs have a combined market capitalization topping $100 billion, according to Nareit data, and posted total returns of 44% through the end of July, making the sector among the top performers in the industry.

By renting to people undergoing life changes—moving or sending children to college, for example—or boat and RV owners and businesses, self-storage can weather the ups and downs of the economy.

“Storage has historically been a recession-resilient sector,” says Spenser Allaway, a senior analyst with Green Street. In the case of Extra Space, the REIT also has a reputation for having a “strong management team that is well deserved,” she adds.

Indeed, in the last decade, the S&P 500-member company based in Salt Lake City has recorded an 831% return to shareholders, making it one of the best performers in the REIT industry.

The company operates across 40 states and Washington, D.C., with 156 million square feet of rentable space. It has also been mindful to diversify. No single metropolitan statistical area (MSA) accounts for more than 13% of revenue—Los Angeles comes in right at 13%, followed by New York/New Jersey at 12%—while no single property is worth more than 1% of the portfolio, a strategy designed to buffer it from regional economic shocks. 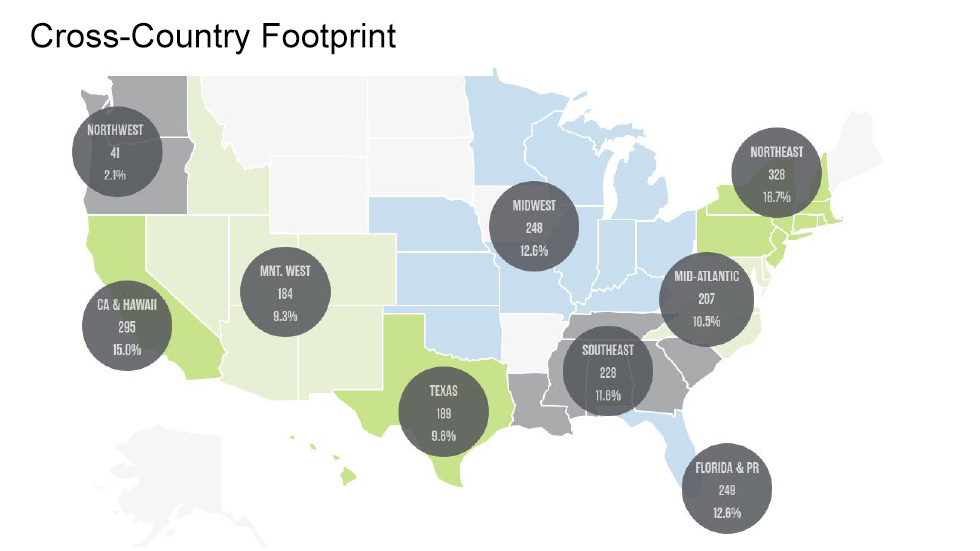 While many businesses found themselves challenged during the COVID-19 pandemic, the self-storage industry attracted robust demand.

“People were introduced to self-storage who had never used it before,” Margolis says. As life shifted and people were suddenly shuttered indoors, leasing picked up as consumers made room for offices and learning spaces, or used the downtime to remodel a kitchen or clean out the garage. 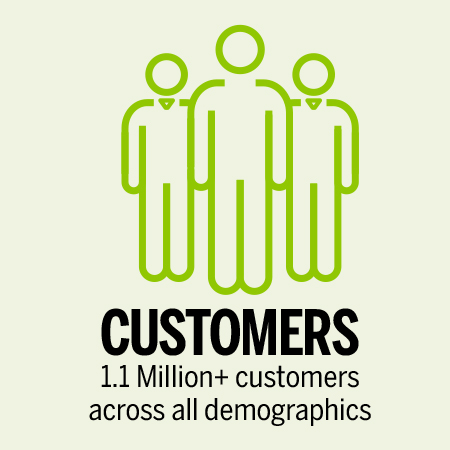 “The number one reason our customers are using storage is moving, and that’s kind of always been the case. But during the pandemic, moving decreased and lack of space increased” as a reason given for leasing space, Margolis explains.

The crisis forced the company to be nimble. We had to “adapt quickly and almost overnight,” recalls Bridgett Currie, an Extra Space store manager/district team leader in Napa Valley. “It allowed us to innovate our online presence both with customers and our internal communications.”

That work paid off. For its second quarter, the company reported same-store occupancy of 97%, up from 94.2% a year earlier. Same-store revenue jumped by 13.6%, while same-store net operating income (NOI) rose by 20.2% compared to the same period in 2020.

Industry watchers don’t expect these gains to dissipate anytime soon. Self-storage “has maintained the forward momentum that began during the pandemic, powering into the summer with strong growth on both the occupancy and rent sides,” Moody’s/Reis says. “Our projection is that the conditions for the sector remain very positive, and the effects of the typical seasonality …will be relatively muted.”

Margolis doesn’t think the pandemic’s end—whenever that occurs—will be followed by customers rushing to empty their rented space. “I don’t think we’re going to flip a switch and everyone’s going to go get their stuff out of storage,” Margolis says.

Green Street’s Allaway agrees: “Much of the COVID-related demand should prove stickier over time than transitory storage uses, such as moving, that contribute to the seasonality of the business.”

Just a few decades ago, self-storage was a largely unattractive product relegated to the edge of town. “First-generation storage was out near the dump with gravel driveways, single-story cinder block with a barbed wire fence to go with the guard dog,” Margolis recalls. “It was a scary place to go at night.” 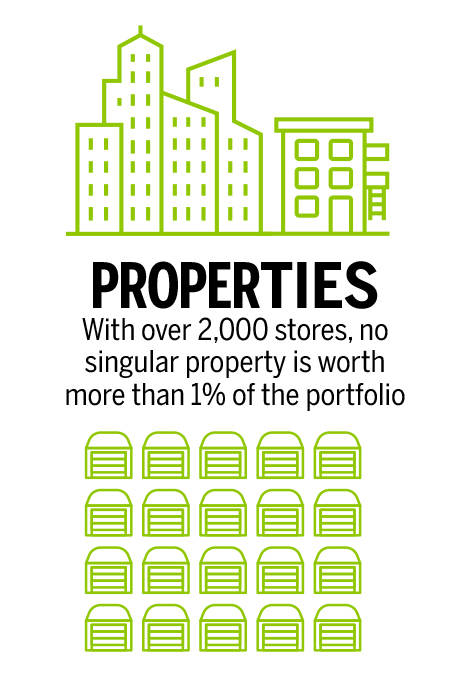 This is the environment in which Ken Woolley, who did part-time research for a self-storage facility while a graduate student at Stanford University, founded Extra Space in 1977. He was the boss who knew “every store manager, their spouse’s name, whether they had kids, what they liked to do on the weekend,” Margolis says. “He had that personal relationship with every employee, and he worked really hard to create a company that valued people.”

In 1998—following that meeting Margolis initially didn’t want to take—the company was recapitalized through a joint venture with Prudential. It went public in 2004 and, a year later, purchased all of Storage USA’s 458 properties from General Electric for about $2.3 billion.

The acquisition of SmartStop Self Storage, Inc. for $1.4 billion came a decade later. Margolis, a graduate of Harvard College and the Columbia University School of Law, became CEO on Jan. 1, 2017, after serving as chief investment officer from July 2015, when he joined Extra Space, until his promotion. He was also a board member at the REIT from 2005 until 2015.

While the sector has become a respected asset class, there is much growth potential ahead as ownership remains fragmented, with small owners and operators still owning the lion’s share. Extra Space owns about 8% of the self-storage market, while sector peer Public Storage (NYSE: PSA) controls about 9%, according to public company filings and square footage data provided by the Self Storage Almanac. Some 45% of the overall market is institutional quality that isn’t owned by REITs, while another 25% is non-institutional quality, according to company estimates.

Unlike the low-slung product of yesteryear, today’s product is bright, colorful, landscaped, and modern, with architecturally attractive locations close to the residences they serve. The company is also listening to investors demanding better environmental considerations. In 2020, Extra Space undertook more than 100 solar installations, while half of the wholly-owned properties have solar installed.

Extra Space’s locations could also be considered prime. In 2020, the company completed a site near the SoFi Stadium in Inglewood, California and in 2024, it expects to finish developing near the Hollywood Park Arena. These will be state-of-the-art, climate-controlled facilities in high-profile retail locations that highlight how storage has changed, the company says.

Instead of a facility on the outskirts of town, storage features plenty of light, open space and eye-catching architecture that is, in some cases, within walking distance of urban centers. In Miami, a building exterior is painted to look like a piece of modern art, while the exterior of a facility in Los Gatos, California resembles a loft community.

Extra Space has no plans to go beyond its core storage focus, Margolis says. “A lot of companies fail because they drink their own bathwater, and I don’t want to be that company that says, ‘You know, we’re really good at storage so let’s do cloud storage or industrial.’ We’re good at what we do,” he says. “We’re a storage company, we’re going to be a storage company. We’re not going to look to branch out into other things, but we’re going to continue to get bigger.”

Nevertheless, the company has been smart in going beyond simply owning and leasing storage space. “Extra Space has also been ahead of the curve in emphasizing ancillary revenue streams,” Allaway says.

Indeed, the REIT creates additional income from management fees, which alone brought in more than $52 million in 2020, along with tenant insurance. Launched in 2019, its bridge lending program provides short-term loans to current and prospective third-party management partners on existing properties and has the additional benefit of creating a potential acquisition pipeline. 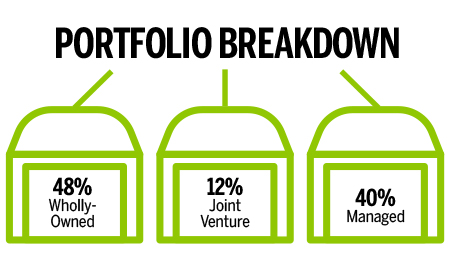 Yet no matter how big the company gets, Extra Space’s 4,000 employees will always remain key, just as they did when the company was founded, Margolis says. These are the people who interact with clients who may be going through a divorce or who may have lost a parent, so having employees who can be reassuring and professional is essential.

“I can’t know every name, but I still go on the road all the time to talk to employees,” Margolis says. “Our goal is that every store manager sits down with me at least once every two years as an opportunity to talk to the CEO.”

In investor presentations, employee-related accolades receive just as much attention as those relating to stock performance. In 2018 and 2020, Extra Space was named a “Glassdoor Best Places to Work” winner, while it also received commendations from Forbes for being a “Best Employer for Diversity.” This year, it was dubbed one of Utah’s “Best Places to Work”.

Currie, who has been with Extra Space for eight years, praises the inclusive atmosphere, the “amazing benefits,” the work/life balance growth opportunities and the fact that the company welcomes “innovation for a better tomorrow.”

“With Extra Space, I envision my career unfolding. They make it possible to grow further into my role and beyond,” she says. “I see myself with the company for many years to come, and I’m excited to see what the future brings.”