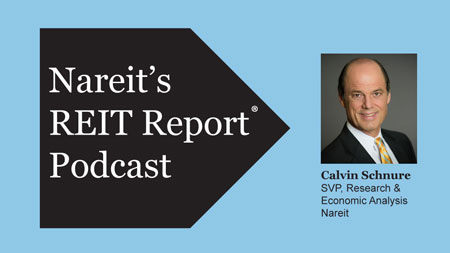 Calvin Schnure, Nareit’s senior vice president for research and economic analysis, joined Nareit’s REIT Report Podcast to discuss how concerns about inflation and interest rates are affecting the broader markets, and the REIT market in particular.

Schnure observed that recent signs that inflation may be picking up prompted a significant increase in interest rates. This sparked large moves in the broad equity markets in early February.

As for REITs, Schnure noted that interest rate increases have both positive and negative effects. Interest rates often rise when the economy is strong and there’s demand for credit, which also means high earnings, Schnure said. “Over most of the history of the modern REIT era, this factor has dominated and REIT shares have tended to rise during periods when interest rates are increasing,” he noted.

However, investors currently appear to be focusing on the potential negative impact of higher rates on REITs, “even though REIT earnings are doing quite well,” Schnure said.

“We’ve seen quite a bit of research indicating that REITs boost returns and reduce volatility over the long term. Hold tight - we’ll get through this fairly well,” Schnure said.

For more information on the potential risks of inflation and interest rates on the REIT market, read Schnure’s market commentary.