The economic backdrop today suggests that REITs are poised to continue their recent solid performance in the second half of 2019 and into 2020.

One of the biggest challenges when interpreting macroeconomic data and news on the commercial real estate market is distinguishing between short-term moves and longer-term trends. Today that is manifest in a recent GDP report showing the economy slowed in the second quarter, as well as data showing that demand for some real estate sectors fell short in the spring. Are these harbingers of a coming downturn?

No. The macroeconomy is decelerating back to a trend pace of growth from the boost it got following the 2017 tax cuts. And although many observers (including this author) were concerned earlier this year about the risks that trade wars might derail the expansion, most economic indicators have maintained momentum more than 2-1/2 months after the trade war escalated. The outlook may have some bumps in the road ahead, and trade frictions remain the greatest source of uncertainty, but the odds of these developments causing a recession are moderate.

With the macro fundamentals still in place, the outlook for commercial real estate and REITs is favorable. Vacancy rates are low across all major property types and supply and demand are roughly balanced, indicating that overbuilding—which has killed more real estate rallies than anything else—is not a major risk for today’s markets.

A quick look at the recent data trends helps make clear that the expansion remains on track. 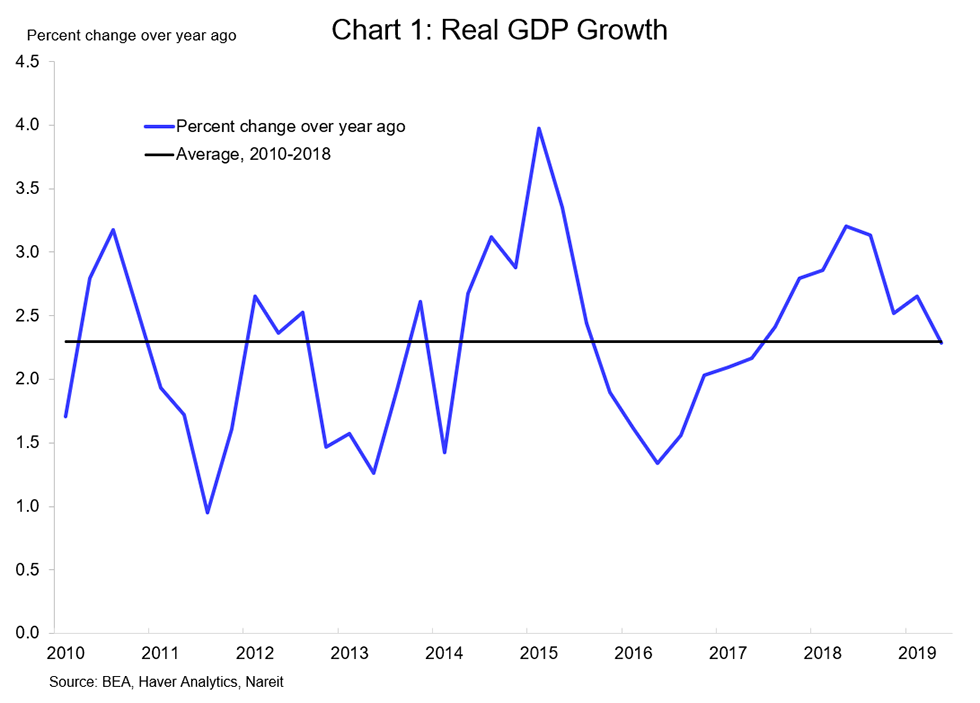 Real GDP growth has slowed over the past year, from an above-trend pace back to growth that is about in line with economic potential. The boost from the tax cuts in late 2017 can be seen as the economy accelerated from 2.8% growth as of the fourth quarter of 2017, to 3.2% in mid-2018, and then decelerating back to 2.3% by 2019:Q2—almost exactly matching the average rate of growth over the prior nine years. In fact, our outlook for 2019, published last winter, anticipated that such a slowing of GDP growth would take place in 2019.

One of the biggest concerns, of course, has been that trade wars could trigger a retrenchment by consumers and businesses. A sudden downturn would not show up in the data showing a 4-quarter- or 12-month change. Higher frequency indicators, however, show no broad-based weakening, with the one exception being exports, which declined at a 5.2% annual rate in Q2. The U.S. economy, however, is less dependent on export markets than most other industrialized countries, and the slip in exports trimmed just 0.6 percentage points from second-quarter growth. More important than the decline in exports is the rebound in consumer spending, which rose at a 4.3% annual rate in the second quarter. 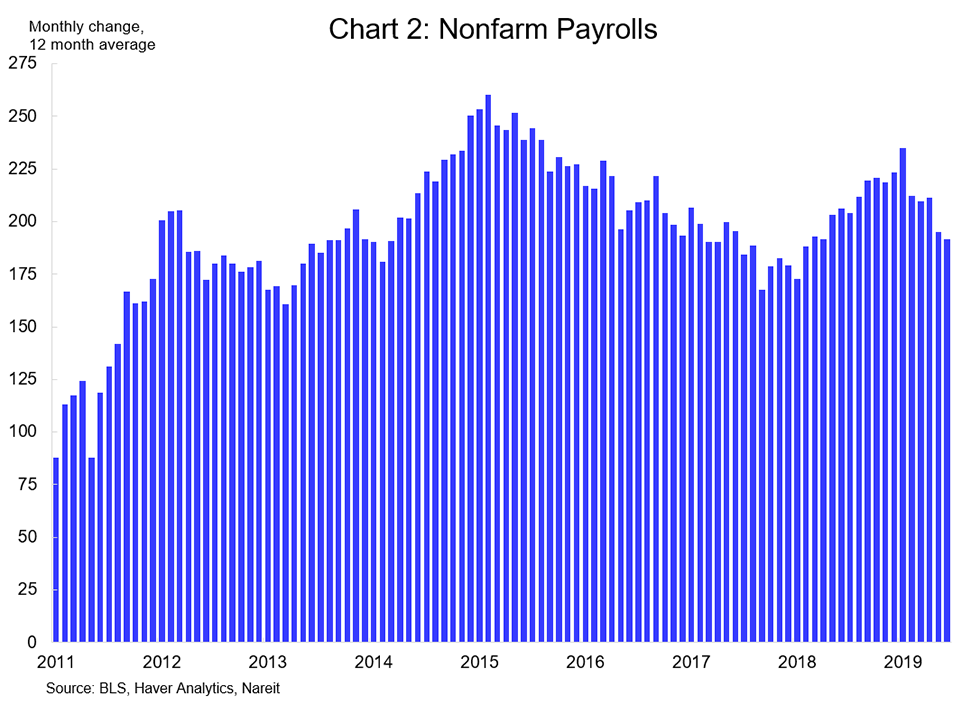 The job market is slowing in line with the rest of the economy. Employment got a boost following the 2017 tax cuts, as the average monthly change in nonfarm payrolls accelerated from 180,000 to above 220,000 in mid-2018. As the stimulus from tax cuts has waned, the average monthly job gain has slowed to 187,000 over the past 12 months. Higher frequency job market data show no slowing taking place suddenly after the trade wars heated up. For example, initial jobless claims have running just above 200,000 per week in June and July, little changed from their level three months ago. 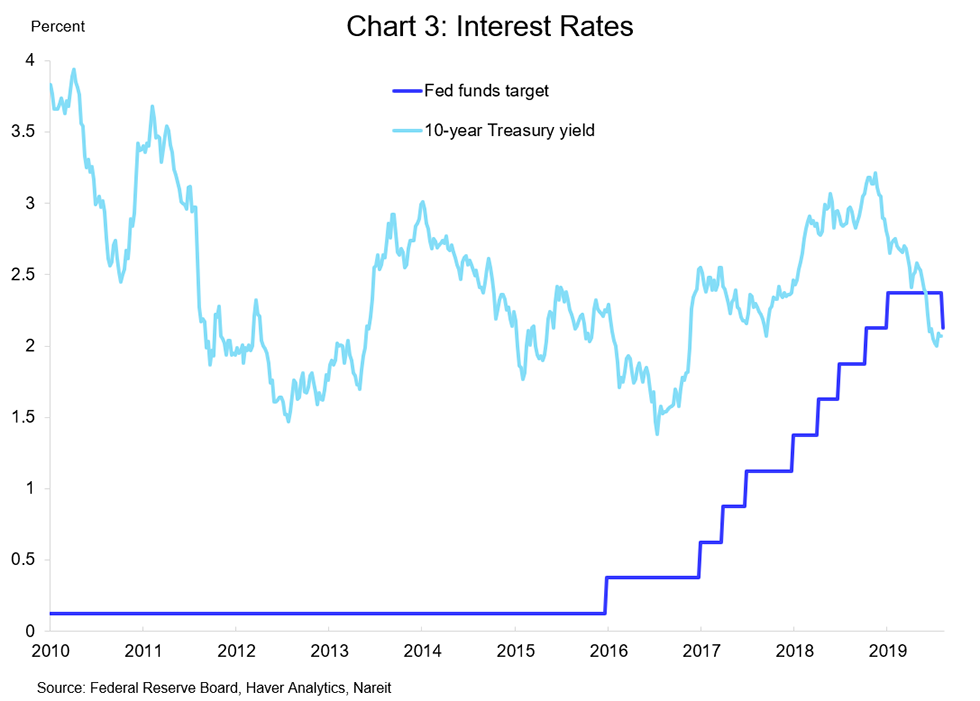 The Federal Reserve in July lowered its target for short-term interest rates by 25 bps, to a range between 2.00% and 2.25%, the first reduction since the financial crisis a decade ago. Fed officials described the move as “insurance” against the risks that the economy lose more momentum. The Fed has ample room to lower rates without allowing the economy to overheat, as inflation has continued to run below the Fed’s 2% target. 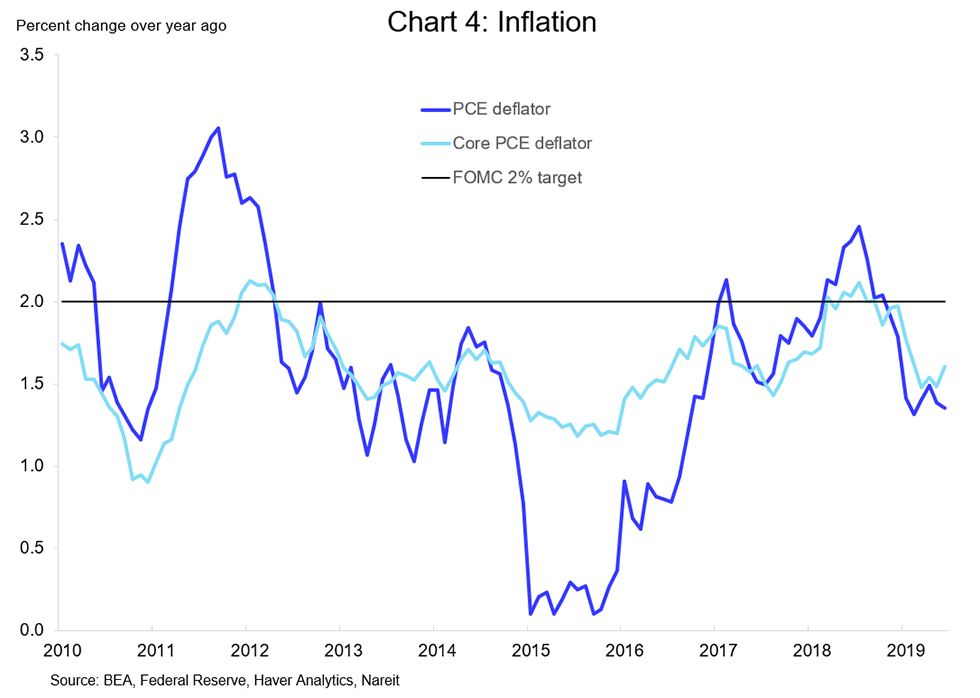 The Fed’s target for short-term interest rates anchors the short end of the yield curve, but it is long-term interest rates that are most important for commercial real estate. Long-term rates have declined, with the yield on the 10-year Treasury note dropping from 3.20% in late 2018 to near 2.0% in mid-2019 (see chart 3 above). Rates on commercial mortgages and corporate bonds have fallen by comparable amounts. Long-term financing rates are attractive and supportive of real estate markets. 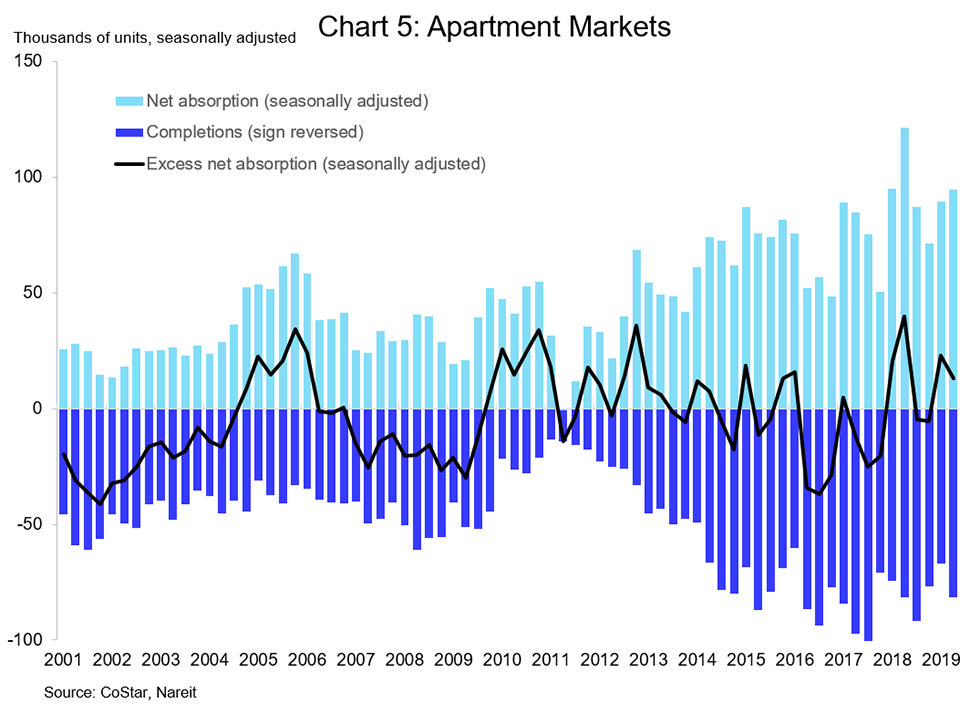 Commercial real estate markets had some areas of strength in the second quarter but also pockets of softness. There was solid growth of demand for apartments and for office space. The spring quarter typically has the strongest seasonal demand for apartments, so robust growth is not unusual. Even after adjusting for seasonal patterns, though, net absorption in the second quarter was the second strongest on record. Demand for rental apartments has kept markets firm, even facing a high level of construction, as net absorption has exceeded completions by 50,000 units over the past four quarters. 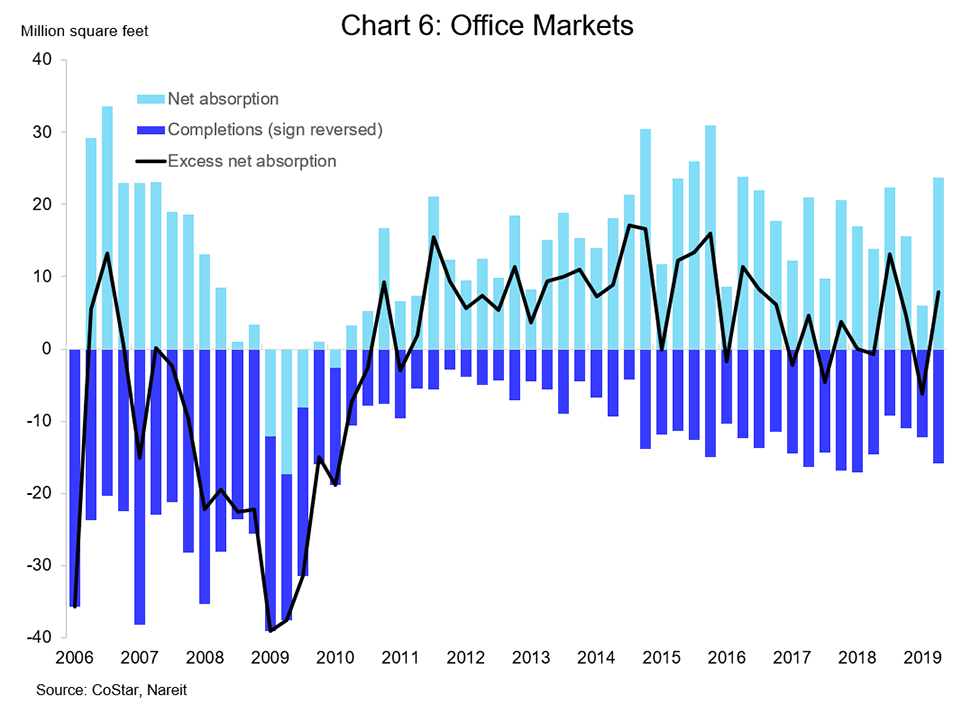 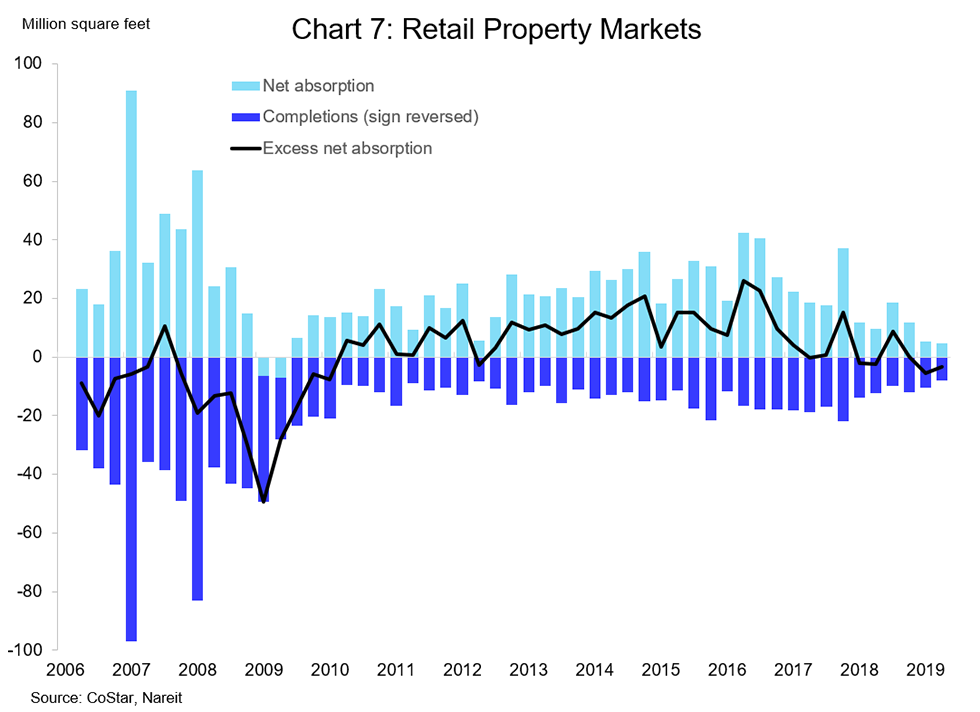 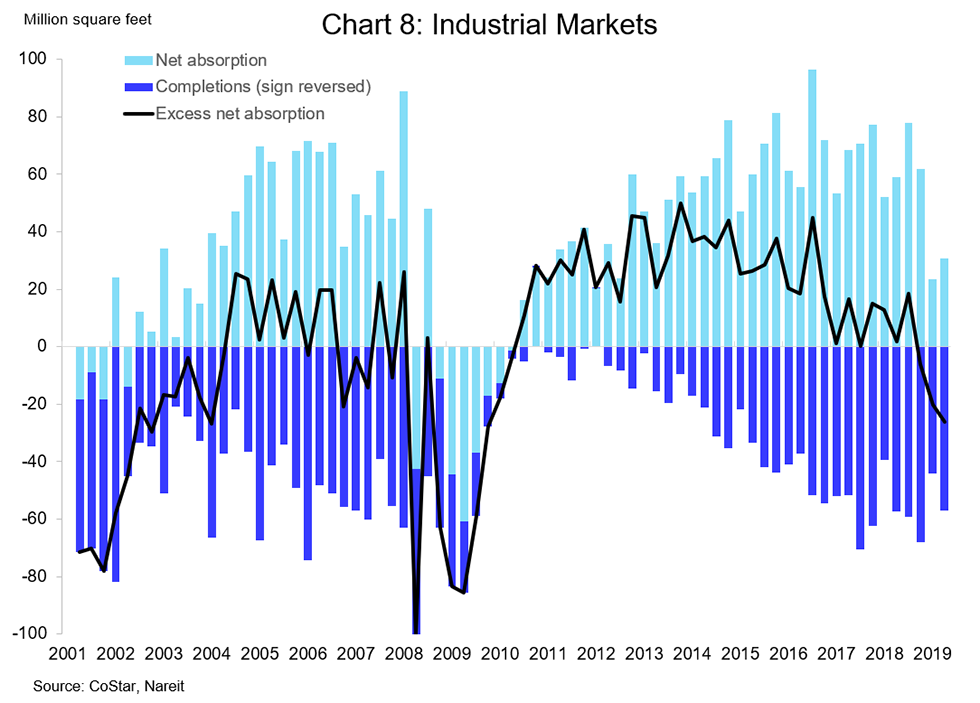 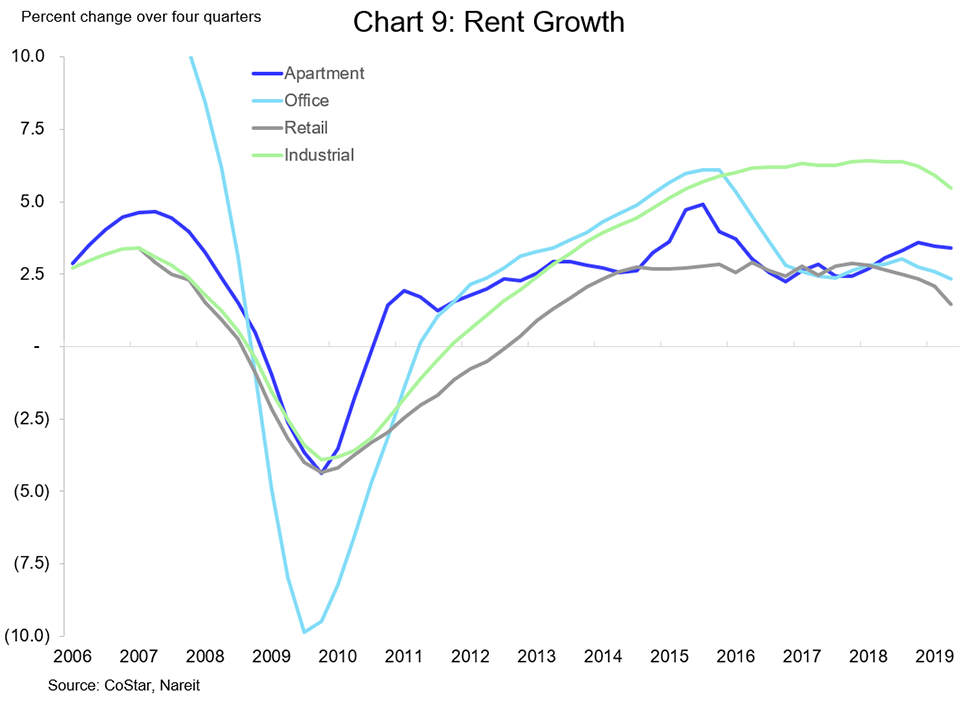 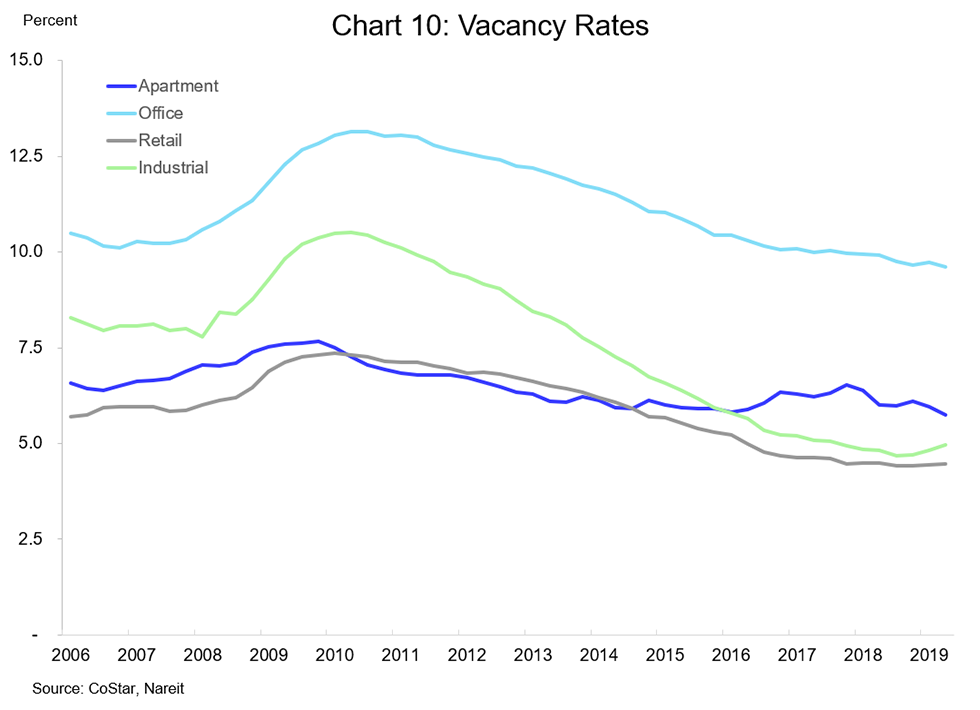 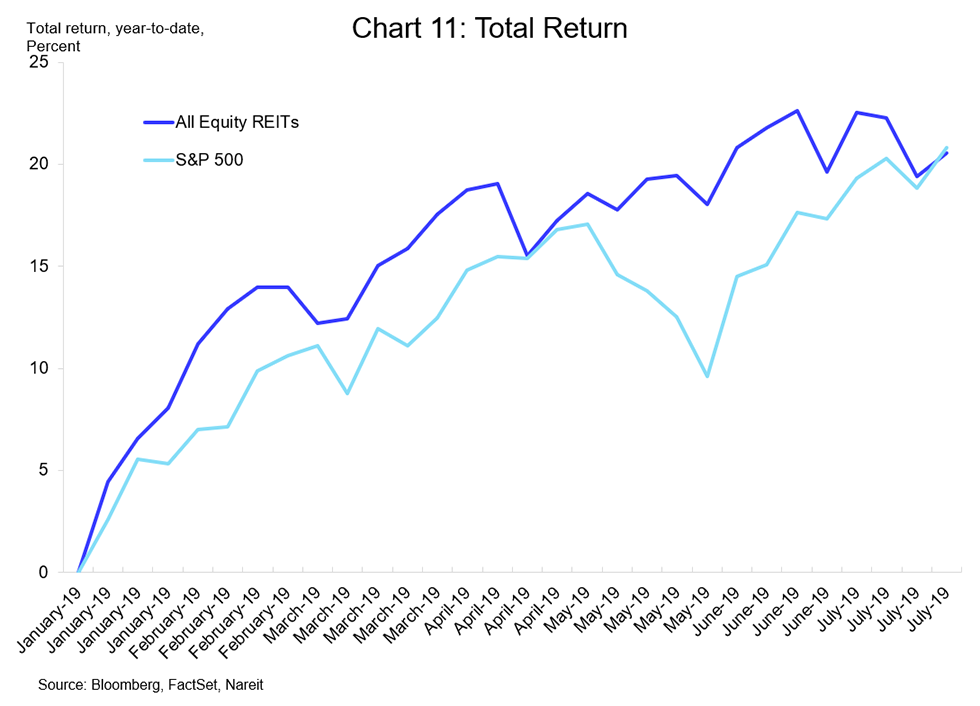 REITs delivered strong results in the first half of 2019, with total returns to investors greater than 20% . REITs have matched or exceeded broader market indices like the S&P 500 for most of this year.

Solid REIT earnings provide an underpinning for valuations. Funds from operations (FFO) of all equity REITs totaled $15.9 billion in the first quarter, according to the Nareit T-Tracker®, an increase of nearly 20% over the prior three years (REITs had not completed reporting second-quarter results at the time this outlook was written. A complete summary of REIT earnings and operating performance will be published in the T-Tracker by mid- to late-August).

The economic backdrop today, with GDP growth easing back towards trend (and continuing to withstand the impact of trade tensions), low interest rates and low vacancy rates in commercial real estate, suggests that REITs are poised to continue their recent solid performance in the second half of 2019 and into 2020.