The next year is likely to be a good but not great one for real estate, with solid job growth, consumer spending and business activity driving demand for nearly all types of commercial real estate.

Will the economy maintain momentum in 2019, boosting demand for commercial real estate, and keeping property prices on their upward path? Or are there signs of weakening in the foundation that could lead to a downturn? Will the Fed keep raising interest rates, or are they likely to pause after one or two more increases? These are some of the top issues that real estate investors will face in 2019.

The next year is likely to be a good but not great one for real estate, with solid job growth, consumer spending and business activity driving demand for nearly all types of commercial real estate. There are several potential clouds on the horizon, though, that could darken the outlook.

"At the beginning of 2018 REITs were undervalued and poised for outperformance. At the end of the year both statements were still true—but less so, because the outperformance has begun."

Before we look at the top issues for next year, here’s a partial scorecard of the predictions I made in December 2017 for the performance in 2018. We won’t have full data on 2018 for a few more months, and will look at all the results at that time. Some areas where I was more optimistic than consensus turned out to be even better than I had expected—GDP growth through the third quarter has accelerated to 3 percent growth over year ago, and wages have risen faster than anticipated. Also, inflation has remained tame, slowing to 1.5 percent pace over the past six months after a short-lived surge earlier in the year.

There are other areas where my forecasts missed the mark—this is the occupational hazard for any forecaster. The Fed has been more hawkish than I had anticipated a year ago, and remains on track for at least a few more rate increases, even as inflation stays under control. And one surprise from real estate markets is that demand for industrial space through the first three quarters of 2018 moderated from the 2017 pace.

Here are the top ten developments in the economy and real estate markets to watch in 2019. For each issue, I lay out several possible scenarios for what might take place, as well as my own assessment, in bold italics, of the odds of each possible outcome, and a brief discussion of why.

It’s most likely that GDP growth will slow, as the boost from last year’s tax cuts fades and higher interest rates cause housing markets, construction activity and business investment to cool. But a sharp slowdown isn’t in the cards, as healthy business activity and consumer demand can handle moderately higher interest rates. Two wildcards, however, are energy prices and trade wars.

Labor markets: Job growth has been robust so far in 2018, with nonfarm payrolls increasing an average of 215,000 per month, which is pretty close to the 210,000 average over the prior five years. With the unemployment rate at its lowest point since 1969, though, will there be enough new workers to meet employers’ needs? 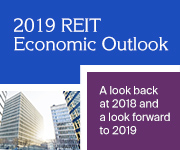 My forecast on job growth tilts toward the high side. The unemployment rate, despite being at a 49-year low, is a misleading indicator in the current economy, as there are still millions of potential workers who are not seeking jobs—and thus not counted in the unemployment rate. Some of the decline in the labor force participation rate is due to retiring Baby Boomers, but even among the 25-55 age groups, there are as many as 2 million potential workers who are not working or seeking employment, relative to pre-crisis norms. The recent acceleration in wage growth will make it more worthwhile for those who are currently out of the labor force—whether in school, caring for children or parents, or other—to go to work.

Inflation: Will we see warning signs of the economy overheating? The Federal Reserve had kept interest rates ultra-low in large part to get inflation back near its 2 percent target. After moving above 2 percent early in 2018, however, inflation has cooled in the second half of the year, and the core PCE deflator—the Fed’s preferred inflation measure—rose 1.5 percent (annualized) in the six months through October.

It’s not unusual for inflation to run a half-percent above or below its medium-term trend for months at a time due to one-off factors or simply high-frequency noise. The low readings in the second half of 2018 indicate that, despite a few “hot” readings earlier in the year, we are still in a low-inflation, low-yield economy.

There are many factors that contribute to this low inflation environment. For example, wage growth has been muted and corporate profit margins are wide enough to absorb some increases in employment expenses. Also, there is ample manufacturing capacity worldwide, which keeps goods prices from rising rapidly. In addition, global competition and consumer and business expectations of low inflation are a powerful reinforcement mechanism. These forces are likely to keep inflation relatively low not just in 2019, but also for several more years into the future.

Federal Reserve: The Fed policy target for short-term rates provides an anchor for the whole yield curve, as well as indicating whether monetary policy will stimulate the economy, is neutral or acts as a brake. Several Fed officials have indicated that the rate increases through 2018 have brought rates close to their neutral level; the key issue is whether they will see a need to tighten further.

There has been a downshift in global growth patterns that will help keep interest rates from rising rapidly. Even with modest increases, these financing rates are still low and are favorable for real estate.

When the Fed says the interest rate outlook is “data dependent”, they focus on the news about inflation. There has been little sign that inflation will accelerate beyond the Fed’s 2 percent target, and there is enough slack in the labor market to keep wages from spiraling higher. The inflation data are more likely to cause the Fed to pause than to step up their interest rate increases, especially with recent comments by Fed Chairman Powell that rates are “just below” neutral. (Note: this outlook was finalized on December 17, 2018, in advance of the FOMC meeting on December 18-19.)

Long-term interest rates: While the Fed has more direct control over short-term rates, it’s the long-term rates that have greater influence on the economy and commercial real estate markets. Yields on the 10-year Treasury note recently moved above 3.0 percent for the first time in five years. A longer-term view, however, shows that yields are still at the low end of their historical range.

Rates will most likely be higher, but not too much higher. Heavy issuance of Treasury securities will be a factor in rising rates. Growth in the rest of the world also influence U.S. interest rates, however, and there has been a downshift in global growth patterns that will help keep interest rates from rising rapidly. Even with modest increases, these financing rates are still low and are favorable for real estate.

Multifamily properties: Apartment rents accelerated from 2010 through 2015, with growth of effective rents peaking at around 5 percent, according to CoStar, as the lingering effects of the housing crisis fueled demand for rentals. Rent increases slowed in 2016 and 2017, however, prompting concerns that heavy construction activity could oversupply the market. Rent growth turned up again in 2018, rising nearly 3.5 percent over the four quarters ending in 2018:Q3.

There are shortages of both homes for sale and apartments for rent in nearly every major city, as there is pent-up demand from the housing crisis great enough to meet even the recent high levels of construction. New construction is being absorbed fairly rapidly in the months after projects are completed. The main barrier to stronger rent growth in such a tight market has been lack of affordability of current rents, as household incomes have barely kept pace with rents. A robust job market that boosts wages will be an important ingredient in future rent growth. 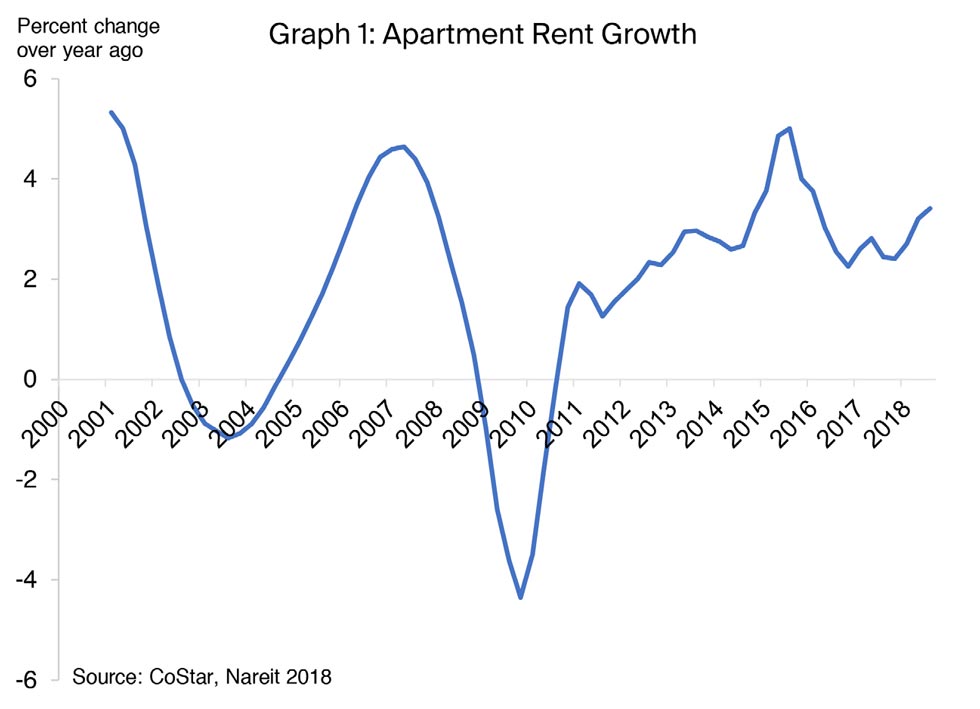 Office markets: Demand for office space has been weak relative to employment trends. Total leased office space has risen about 1 percent per year since 2012, according to data from CoStar, while employment in office-using sectors (finance, professional and business services, information services) has grown 2 percent per year. Changes in the office work environment, with more shared work space and cubicles instead of individual offices, account for some of the weakness in demand, as well as the spread of WeWork and other office sharing arrangements. Will these trends continue in 2019?

There limits to how many workers can be squeezed into a given amount of space, and at some point net absorption will realign with job growth—though probably not in 2019. Some of the weakness in demand, however, has been a lingering effect of the financial crisis, when firms let workers go but did not reduce the amount of office space they leased. It took several years for these “hidden vacancies” to be absorbed; now that process has been completed, and more and tenants will need to lease additional space as they hire new workers.

Retail property markets: During 2018, many retail property owners were hard at work re-leasing space following a spate of retailer bankruptcies in 2017. Many have made good progress, including the REITs that own regional malls, as these higher-quality properties are much in demand. Still, the store closures left their mark on same store net operating income (SS NOI). SS NOI growth (on a 4-quarter change basis) slowed from 3.3 percent growth in 2016:Q4, to 1.1 percent growth in 2017:Q4, but has picked up to 2.1 percent increase through 2018:Q3. (The Nareit T-Tracker® has comprehensive data on the operating performance of REITs, including SS NOI). 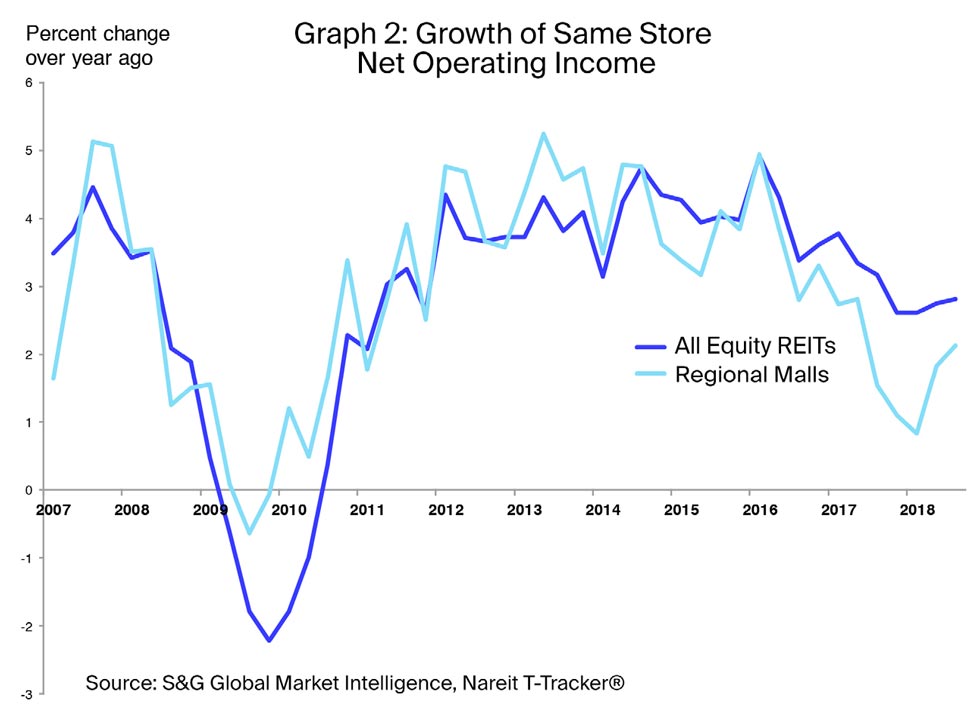 Retail has seen a rebound in 2018, as tenant sales have picked up and retailers have learned the importance of having a physical location as well as Internet sales. This sector is likely to firm in 2019.

Industrial markets: Rent growth in the industrial sector has been the strongest among the main property groups, averaging 6 percent or more for the past four years. While demand shows few signs of slowing, construction has caught up to demand. Vacancy rates, which had been dropping as much as one percent or more a few years ago, are now edging down slowly. Will this pace of construction cause rent growth to cool?

The industrial boom is far from over, as demand for logistics space rises with online sales. Furthermore, there is less scope for new construction, as most of the large open spaces near population centers and transportation hubs have been developed. New facilities will rely on infill locations, including multistory warehouse and logistics facilities. These constraints on supply will keep rents on an upward path.

Property prices: Commercial property prices continued to rise this year, despite some concerns about valuations and the fundamentals that underpin the sector. The CoStar Commercial Repeat Sales Index (CCRSI) was up 5.0 percent in the 12 months through October, 2018. Do rising prices confirm that the market is on solid footing, or suggest that valuations have gotten further out of line?

Recent price increases have been fully supported by growth of net operating income (NOI), and the fundamentals for commercial real estate are sound. New construction has been moderate and in line with demand, keeping vacancy rates stable or on a slight downtrend, and rents are rising. Rising interest rates will pose a challenge to pricing, though. Cap rate spreads to Treasury yields are a bit wide, but that margin has narrowed significantly. The large price increases over the past five years certainly suggest it is prudent to keep an eye on pricing, as excessive valuations are one of the potential dangers of real estate investment—but we aren’t there yet. 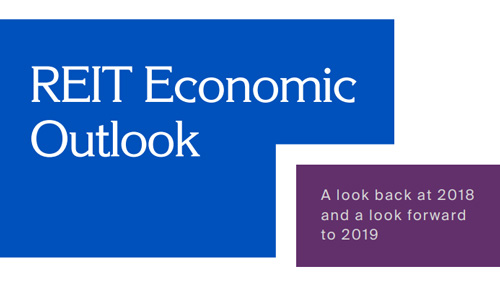