Is the Real Estate Market Cycle In its Late Stages? (No.)

I read a comment the other day claiming that the current real estate market cycle is nearing its end.  It’s interesting: I’ve heard the same sentiment expressed in several ways (often using colorful language such as “in the late innings” or “long in the tooth”), but I have yet to see such quote-ready commentators make a cogent argument supporting their view.  It shouldn’t be difficult: after all, there are several types of data that could be used to support a prediction.  Let’s go ahead and actually look at the data:

Here’s one weird statement: I’ve seen people say that “real estate has a seven-year cycle,” implying that the current one is “past its sell-by date” (to use another colorful phrase).  Actually, the duration of a typical real estate market cycle seems to be much, much longer than seven years:

The current real estate market cycle (shown as the green line in Chart 1) started from a peak at the beginning of February 2007, so it has lasted barely more than 10 years so far.  If it were to end now, the duration of that cycle would be stunningly shorter than normal. 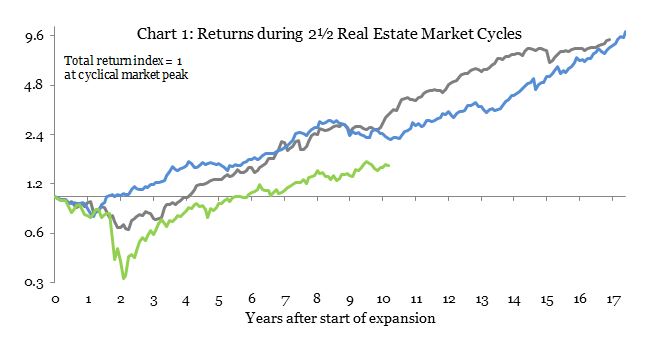 In short, the reason that average REIT return since January 2007—the last cyclical market peak—have averaged no better than 4.4% per year compared to roughly 14% per year over the last two full real estate market cycles are that (1) the liquidity crisis was so much worse than the downturns that marked the beginning of each of the two previous market cycles, and (2) so far we’ve had the benefit of only something like the first half of the normal cyclical bull market.

One of the most common signals of the coming end of a real estate market cycle is a surplus of construction, and construction activity has grown dramatically over the past six years: in fact, the real (inflation-adjusted) value of new construction put in place grew by 14.5% per year, on average, from 2011Q1 to 2016Q4.  “Rapidly growing construction,” though, is very different from “too much construction.”  In fact, the value of construction put in place was actually lower (after inflation) in 2016Q4 than it was in 1996Q2—more than 20 years ago!  What most who tell the “beware of construction” story fail to mention is how dramatically construction activity plummeted as a result of the 2008-09 liquidity crisis: it declined by nearly 60% in less than three years (2008Q2-2011Q1), and is still 10% less than it was before the liquidity crisis began—and even that pre-crisis figure wasn’t particularly elevated, less than 8% over the average value for the previous 16 years!  Meanwhile, the overall economy is now more than 12% larger (in real terms) than it was in 2008, and nearly 60% larger than it was in 1996.  In short, even though the pace of construction has increased, it’s still actually quite low by normal historical standards, especially relative to the size of the overall economy.

The flip side of the too-much-supply story is the too-little-demand story: sure, the real estate market may not suffer from oversupply, but it’ll suffer anyway if macroeconomic demand conditions soften.  What reason does anybody have, though, to predict any softening in macro demand conditions?  Most macro indicators, especially labor market conditions, suggest an optimistic view of demand growth.  The Federal Reserve predicts continued moderate GDP growth and regards uncertainty as “weighted to the upside,” meaning they believe there’s a bigger chance of being surprised by better-than-expected macro conditions rather than softening.  Even those who forecast a decline in the stock market aren’t expecting macro demand conditions to weaken; instead, they are concerned simply that (non-REIT) stock valuations have become too optimistic relative to earnings.  Recessions typically follow a period when the cyclical sectors of the economy grow large relative to non-cyclical sectors, but cyclical sectors are still smaller-than-average relative to non-cyclical sectors.  There simply doesn’t seem to be any reason to expect any softening in demand for real estate in the near-to-moderate future, and therefore no reason to expect demand conditions to signal an impending end to the real estate market cycle.

If there were too much construction and/or too little demand, such an imbalance would generally show up as higher-than-usual vacancy rates, but vacancy rates for REIT-owned properties have hardly ever been lower than they are now.  Data reported by exchange-traded equity REITs (and summarized in NAREIT’s T-Tracker®) for 2016Q4 shows that occupancy rates averaged 94.1% for Apartment REITs, 93.5% for Retail REITs, 92.3% for Industrial REITs, 91.1% for Office REITs, and 90.8% for all equity REITs combined.  We’ve collected occupancy data going back to the beginning of 2000, and we’ve literally never seen aggregate occupancy rates for Apartment or Industrial REITs higher than they are today; Office REITs haven’t had higher occupancy rates since 2002Q1, while Retail REITs reported higher occupancy rates only (and only barely) during 2014Q4 and 2015Q4.  There have been some reports of increasing vacancy rates in the real estate market, but if so then it certainly hasn’t affected properties owned by exchange-traded equity REITs.

Similarly, the kind of supply/demand imbalance that might signal “the beginning of the end” of the current real estate market cycle would also tend to reveal itself in the form of weak or negative growth in lease income.  The most accurate way to look at this is using same-property net operating income (NOI), reported by REITs in most property sectors and available in NAREIT’s T-Tracker® in terms of the percentage change over the previous four quarters.  For the four quarters ended 2016Q4 same-property NOI was up 3.82% for Apartment REITs, 4.12% for Industrial REITs, 3.97% for Office REITs, and 3.14% for Retail REITs; for all equity REITs combined, same-property NOI was up 3.62%.  For comparison, that’s not just an improvement on the 3.39% growth reported for the previous four-quarter period that ended with 2016Q3; it’s also higher than the 3.56% average growth over all four-quarter periods since the beginning of 2000.  In short, growth in net operating income is stronger than usual.

Perhaps the most informative way to answer the question whether we’re nearing the end of a cycle is to ask whether REITs have become overvalued: after all, those market prognosticators who are predicting a downturn in (non-REIT) stock prices are responding to their sense that those (non-REIT) stocks have become overvalued.  I posted a series of market commentaries in February arguing that a range of valuation metrics including average yield spreads to Treasuries, average yield spreads to Baa-rated corporate bonds, average stock price premium/discount to net asset value (NAV), actually suggest that REITs are more likely undervalued, perhaps significantly so, especially relative to non-REIT stocks.  The valuation picture hasn’t really changed since then: as of the end of March, the same valuation signals suggested that—if the historical relationship between them and subsequent REIT returns continues to hold—total returns from investments in exchange-traded equity REITs can be predicted to average something like 11.75% per year over the next four years, and to outperform the broad stock market by something like 4.8% per year over the same period.

Of course nobody can predict the future, so I can’t say for sure that the current real estate market cycle will last as long as previous cycles did, nor can I say for sure that returns over the remainder of the current bull market will be as strong as they were over previous bull markets.  Still, I think it’s very difficult to make any thoughtful (let alone empirically based) case for predicting that the current real estate market cycle is nearing its end.  The evidence simply isn’t there.