REIT Earnings Recovery Slows in the First Quarter of 2021

WASHINGTON, D.C., (May 21, 2021) – After two consecutive quarters of double-digit growth, REIT earnings recovery slowed in the first quarter of 2021. According to the Nareit Total REIT Industry Tracker Series (T-Tracker®) report released today, FFO for all equity REITS rose 2.0% to $14.0 billion.

“Different parts of the economy are reopening at different speeds, and REIT performance by property sector reflects this variation,” said Calvin Schnure, Nareit senior economist. “The recovery is broadening with the vaccine rollout, however, and prospects for improvement have gone from ‘if’ to ‘when’."

The Retail sector – one of the sectors hardest hit by the pandemic – reported a 5.5% rise in FFO, and has recovered more than a third of the decline in FFO that occurred during the 2020 spring economic shutdowns.

Office and diversified sectors showed continued declines in the first quarter of 2021, while lodging/resorts reported negative FFO for the fourth consecutive quarter, although these losses are diminishing as travel resumes and people return to work.

Residential REITs reported a 5.5% increase in FFO following declines in three of the four quarters of last year. 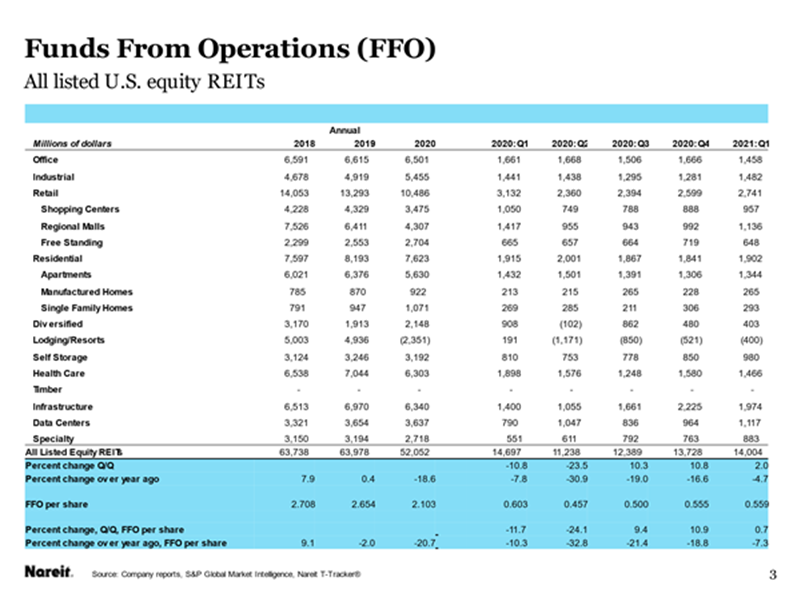 “Despite the pause in recovery, REITs entered the pandemic with strong balance sheets and low leverage ratios and have maintained them throughout economic shutdowns and uncertainty,” said “REIT said Nareit President and CEO Steven A. Wechsler. “As the vaccine rollout continues and life slowly begins to return to normal, we believe we will continue to see recovery in the sectors most heavily impacted by the pandemic and REITs will continue to preserve their solid financial fundamentals.”

Several factors monitored by the T-Tracker demonstrate the resilience of the REIT sector, including: