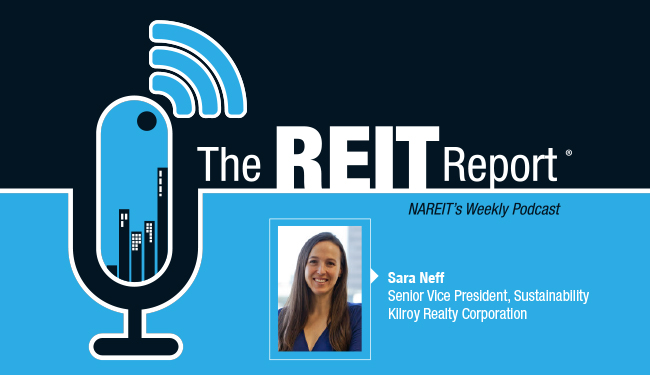 Kilroy received the the 2016 Leader in the Light Award in the Office category. The awards recognize NAREIT Corporate Members for leadership and innovation in sustainability. (Neff also spoke with The REIT Report earlier this year about Kilroy’s sustainability achievements.)

Neff pointed out that, as an office company, Kilroy doesn't have the kinds of assets with large roofs that are generally thought to be best for harnessing solar energy. Despite the challenges, she described renewable energy as the "icing on the cake" for Kilroy's energy efficiency program. "I don't think you can say truly that you have a fully developed sustainability program unless you've figured out how to make renewables work," she said.

Neff admitted that Kilroy's solar power program has yet to produce significant reductions in the company's carbon emissions. However, the program is helping the office REIT achieve its own internal goals for cutting emissions on an annual basis, according to Neff.

"Is it going to make our entire portfolio carbon neutral? No, it's not," she said. "But in terms of helping us reach the aggressive energy goals we set for ourselves, it is critical."

Neff pointed out that the benefits of solar power aren't limited to companies on the sunny West Coast. New Jersey boasts a high level of solar power usage, she noted, as does Germany.

"We've shown that we can make it work in small office buildings," Neff said. "I think in the Midwest, where the land values aren't as high as in [Kilroy's markets], it will be even more cost effective."

Kocak interviewed sustainability professionals representing the 2016 Leader in the Light Award winners at REITWorld 2016: NAREIT's Annual Convention for All Things REIT. Look for more special editions of The REIT Report featuring these conversations on REIT.com, including: