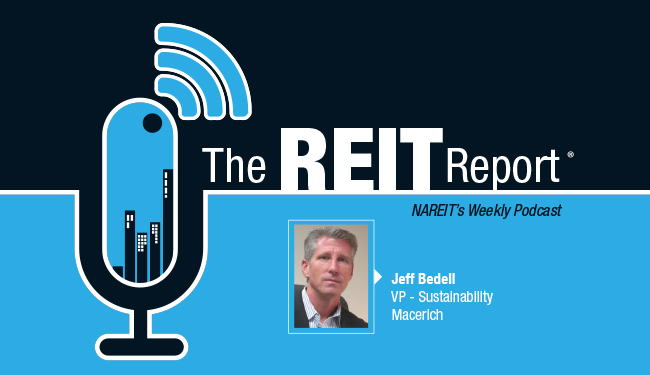 Macerich received the the 2016 Leader in the Light Award in the Retail category. The awards recognize NAREIT Corporate Members for leadership and innovation in sustainability.

Bedell was asked about potential conflicts that arise with tenants when real estate companies try to implement property-wide sustainability solutions.

"I don't think the tenant needs and requirements that we've ever seen out there have hindered or got in the way of our programs, especially our operationally based programs," he said.

A major part of Macerich's sustainability program has involved focusing on the common areas within the shopping centers in its portfolios. These efforts have included on "qualitative" aspects of the properties, such as enhancing the amount of natural light within a property, according to Bedell.

Macerich is currently adapting to the growth of omni-channel retail strategies and the popularity of online shopping. Bedell said the company's sustainability program feeds into Macerich's efforts to ensure its properties are desirable meeting places for people.

"The tenants are right on board with that," he noted.

According to Bedell, maintaining sustainability measures can prove to be a challenge: "The biggest difficulty is keeping people engaged onsite."

Bedell also offered his thoughts on constructing the business case for sustainability investments, such as investing in alternative energy technologies. He pointed out that the size of Macerich's mall and parking lots are conducive to implementing solar power. When companies take a long-term approach to sustainability, it becomes easier to see the benefit of those kinds of investments.

Kocak interviewed sustainability professionals representing the 2016 Leader in the Light Award winners at REITWorld 2016: NAREIT's Annual Convention for All Things REIT. Look for more special editions of The REIT Report featuring these conversations on REIT.com, including: