Cousins Properties is poised to benefit from the migration of talent and employers to the Sun Belt office market. 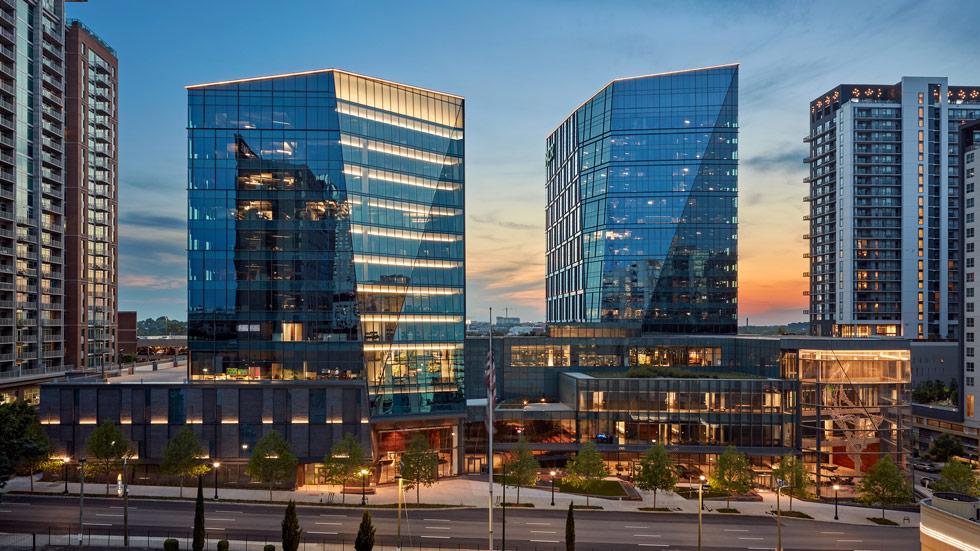 The Spring & 8th office building was awarded LEED Platinum Core & Shell Certification, the first in the state of Georgia.

Cousins Properties (NYSE: CUZ) was at a critical juncture in 2011, the year its current president and CEO Colin Connolly joined the company. Since then, and in the wake of a concerted effort to simplify its focus, Cousins has emerged as a leading Sun Belt office REIT in a region experiencing population growth and an increasing number of corporate relocations.

Connolly, 44, began his tenure at Cousins as a senior vice president focusing on acquisitions and dispositions and quickly rose through the company’s ranks. He became CEO on Jan. 1, 2019.

Back in 2011, then-chairman and CEO Larry Gellerstedt was working to guide the company out of the Great Recession and reposition Cousins’ diversified portfolio away from retail, industrial, and residential toward highly-amenitized trophy office buildings in walkable, urban areas in Sun Belt markets.

“Looking back to 2011, we were very much a diversified REIT and involved in just about every property type,” Connolly says. “We were at a unique point in time, obviously trying to emerge from the global financial crisis, and the company was over-levered, subscale, and really we were at an inflection point.”

Cousins’ leadership team and board of directors forged a path forward, which Connolly calls a “unique and compelling strategic plan” to build a preeminent Sun Belt office company. “We felt like that was where our strengths and relationships would differentiate us,” Cousins CFO and EVP Gregg Adzema says.

Connolly, along with Adzema and the leadership team, have since completed two significant mergers of competitors to gain an even bigger foothold in the Sun Belt office market. Today, that strategic transformation has led to a $5 billion market cap company with a portfolio of 21.8 million square feet of class-A office space in high-growth markets like Atlanta; Austin; Dallas; Phoenix; Charlotte, North Carolina; and Tampa, Florida. Company-wide, its office portfolio stands at 91.9% leased.

That refocus may prove even more valuable during the COVID-19 pandemic and post-pandemic. By assembling a premier Sun Belt office portfolio in what Cousins considers the best submarkets, Connolly says the properties are the “last to feel the downturn and the first to feel the recovery.”

The company’s portfolio of properties concentrated in high-growth Sun Belt cities is likely to bode well for the company, according to analysts, as the region is likely to command higher rents compared to the broader office market.

“We think those markets actually have a pretty good chance of outperforming the rest of the office universe, because of the fact that they’re not as dense as some of the primary gateway markets that you typically see on the coasts, in the Northeast and the West Coast,” says Blaine Heck, senior equity research analyst at Wells Fargo Securities.

“We’re expecting the pandemic actually causes an acceleration of that migration into some of the Sun Belt markets, and I think Cousins is well-positioned to take advantage of that increase in population and corporate relocations to those markets,” Heck adds.

Cousins reported rent collection for the third quarter was 98.7% from office tenants. Moreover, Cousins executed leases for nearly 255,000 square feet of office space, and the office component of its 1.9 million-square-foot development pipeline is 82% preleased. Additionally, Cousins has in excess of $1 billion of available liquidity.

“In a normalized environment, these would be solid results,” Connelly told investors during Cousins’ October earnings call. “In a global pandemic, these are terrific results and reinforce the quality of our markets, our portfolio, and our customers.”

While leasing slowed in the third quarter due to a summer spike in Sun Belt COVID-19 cases, since Labor Day Cousins has seen an uptick in leasing tours and discussions across its portfolio. Cousins notes that economic development agencies in Atlanta, Austin, Charlotte, Dallas, Phoenix, and Tampa are active with prospective companies looking to relocate employees out of the Northeast, Midwest, and California to the Sun Belt.

Those results and activity have impressed analysts. “We’ve had a ‘buy’ rating on Cousins for a while,” says Michael Lewis, managing director of REIT equity research for Truist Securities. “They’re obviously a Sun Belt-focused REIT benefitting from the migration of population and jobs into their markets.”

Lewis notes that the company is also a large developer with a development pipeline that’s highly pre-leased. “As those projects deliver, they will start cash flowing, so that will support some earnings growth over the next few years,” he continues. “The third piece is the balance sheet, which is the lowest-levered balance sheet of the office REITs that we cover.” Adzema adds that Cousins’ balance sheet strategy “has been intentional and a core principal of our strategic plan.”

To get to where they are, Connolly says Cousins identified two powerful trends and positioned itself at their intersection. First, the ongoing war for talent and the migration of that talent to the Southeast and Southwest.

“Ultimately, companies are searching for a lower-cost, lower-tax, higher quality of life in what are predominantly pro-business environments,” Connolly explains. “We believe that’s a trend that has certainly been accelerated and will continue to accelerate.”

Secondly, Connolly says companies and talent will continue gravitating toward a flight to quality in these highly amenitized office submarkets.

“The customer and their employees want a high-quality office environment with a diverse set of amenities in an urban area and a focus on health and wellness in their buildings,” Connolly notes. “It’s experiential office, which will be even more powerful on the other side of the pandemic and this work-from-home trial.”

Despite the challenges of the COVID-19 crisis, Connolly believes tenants will return to experiential offices.

In a post-vaccine era, companies and corporate leaders, as well as their teams, will want to come back to the office to benefit from the powerful differentiators of being together, Connolly continues. “Currently, their employees aren’t benefitting from that in-person experience where there’s collaboration and on-boarding and mentoring of new talent.”

Cousins’ portfolio is approximately 20% occupied as it works to bring tenants back. “There really was no playbook, so we quickly learned that we had to adapt and innovate in real time on a daily basis to what was a changing landscape,” Connolly notes. “We realized very quickly that the most important thing we needed to do was communicate with our stakeholders.”

Across its portfolio, Cousins is following Centers for Disease Control and Prevention guidelines and putting in policies and procedures to help keep tenants safe as they return. The focus is on communication, signage, cleaning, air quality and ventilation, water quality, elevator use, common areas and amenities, and access and visitors.

Cousins is one of the biggest office landlords in Austin, where it owns or has under construction 4.8 million square feet in the city’s central business district and The Domain, known as Austin’s “second downtown” in high-tech Northwest Austin.

“Signing leases, even throughout the pandemic, is pretty impressive, and obviously, the development pipeline is another avenue of future NOI and asset value growth for the company,” Heck points out.

“Cousins has done a very good job of not only executing on the leasing within the projects under construction, but also sourcing new land and new opportunities to go out and develop buildings with high pre-leased rates,” Heck continues. “They’ve done a great job of focusing their efforts on submarkets within the Sun Belt that are in high demand.”

Simultaneously, Cousins completed the purchase of Norfolk Southern’s existing regional headquarters (dubbed 1200 Peachtree), paying $82 million for the 370,000-square-foot building. Cousins will continue leasing the building to Norfolk Southern until the company moves into its new corporate headquarters in mid-2021.

Cousins will redevelop the former Norfolk Southern property for what Connolly calls a strong, growing customer base in Midtown Atlanta. He says Midtown is a destination for companies focused on highly-amenitized markets where they can attract the talent to expand.

In the past four years, Cousins completed two major acquisitions of rival companies to expand its Sun Belt presence. In 2016, it merged with Orlando-headquartered Parkway Properties (NYSE: PKY) in an estimated $1.95 billion deal. The merger deepened Cousins’ portfolio in Atlanta, Austin, and Charlotte.

The merger also created a smaller spinoff of Parkway, which was acquired in 2017 by the Canada Pension Plan Investment Board. The spinoff was composed of both Cousins’ and Parkway’s Houston properties. This move eliminated the Houston exposure of both companies, but also provided investors who wanted to invest in the Houston market the ability to do so. Connolly says the Houston office market at that time was facing significant headwinds due to a declining oil and gas market.

“We believe acquiring TIER was a positive investment for our shareholders,” Connolly explains. “It enhanced the company’s geographic mix by increasing our exposure in the dynamic Austin market. It increased our footprint in the Charlotte market and gave us a strategic entry into the Dallas market. At the same time, it increased our growth profile as TIER had several very attractive development projects under construction.”

Additionally, the merger increased the efficiency of Cousins, since there was more than an 81% geographic overlap in the two portfolios that allowed for substantial synergies, Connolly notes.

“The TIER acquisition really did one big thing for Cousins and that was expand their presence in Austin and gave them control of The Domain,” notes David Rodgers, senior research analyst at Baird. He says the TIER merger continued Cousins’ mission of acquiring assets that are more tech-oriented.

“You see Cousins continuing that migration toward tech by buying TIER and the exposure that it had in Austin, and particularly, The Domain, where you have tenants like Facebook and Amazon,” he says.

“Cousins has one of, if not the best, balance sheets of the major office owners,” Rodgers adds. “They have the development capacity and high-quality, young assets in some of the best markets. When you roll it up, we like all that about it.”

Connolly says COVID-19 has brought a bit of a pause into the office market, understandably so, and that will likely weigh on fundamentals while Cousins works though the pandemic and the market disruption it caused.

“But on the other side of the health crisis, our conviction around a Sun Belt trophy office strategy has only grown,” he says. “We believe that the trends that were underway, including a migration of talent and employers to the Sun Belt, will only move faster, and we’ll continue to respond to that changing and accelerating landscape.”