Evaluating the Future of REIT IPOs 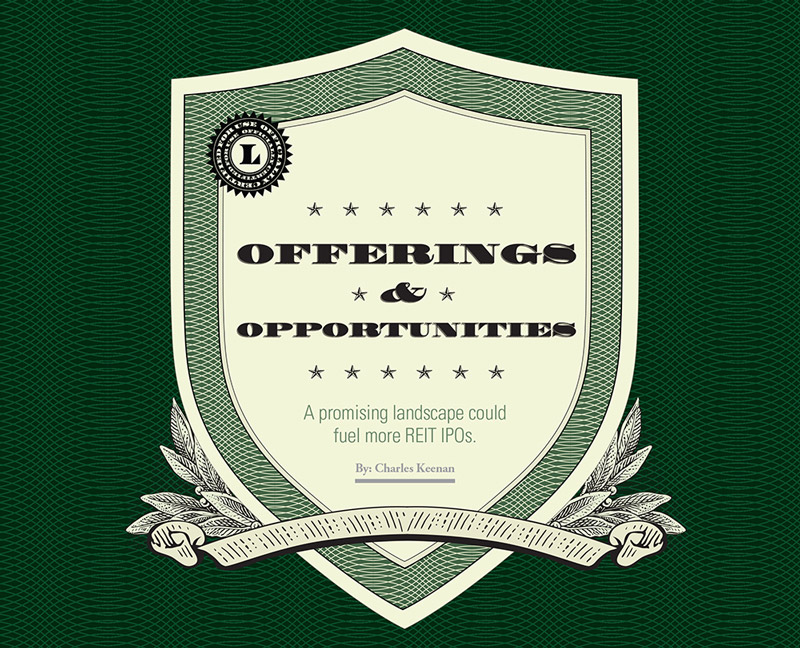 Low long-term interest rates, constrained supply in many property sectors, decent valuations and low vacancy rates have all contributed to favorable conditions for well-managed companies to go public. After a great run for REIT stocks in 2014, with the FTSE NAREIT All REITs Index up 27 percent, the higher valuations could lure new entrants to the IPO market.

“We have a Goldilocks situation of low long-term interest rates, a good growth profile, and competition for limited homes for capital,” says Vivek Seth, managing director and head of real estate investment banking at Raymond James Financial. “We’re at the point in the cycle where we should see a fair bit of activity this year.”

At first glance, 2014 looked like a lackluster year. Only five U.S.-based IPOs were completed that involved stock exchange-listed equity and mortgage REITs going public. That compares with 19 deals in 2013.

After a six-month lull last year, the prospects for IPOs in 2015 received some tailwinds near the end of 2014. In November, Paramount Group Inc. (NYSE: PGRE) became the largest REIT IPO ever at $2.6 billion, and Store Capital Corp. (NYSE: STOR) came to market with a $585 million offering. Both deals were oversubscribed, and the stock prices of the companies have risen since the offerings.

If management has a good story to tell, the markets are willing to listen, says Jackson Hsieh, vice chairman and a managing director in the investment banking department at Morgan Stanley.

“The market for traditional IPOs is open, willing and able,” Hsieh notes. “But it’s a very high bar. The company has got to be in the right subsector, have the right management team and have the right growth prospects. If it has those elements, the deal will get done.”

Timing is also critical. Paramount and Store were in the queue for IPOs earlier in 2014, but waited for better conditions, Hsieh notes: “The rally in the market in November gave us and the company confidence that we could execute.”

Paramount, led by Albert Behler, owns class-A office properties in New York, San Francisco and Washington. Behler and his management team have proven themselves to investors over the years.

“There is a lot of interest for the types of buildings Paramount manages,” Hsieh says. “Asset sales in the major gateway markets for class-A buildings today are very robust.”

The transaction also helped Paramount improve its balance sheet, while giving an exit to some shareholders.

“The deal provides permanent capital for the portfolio buildings,” Hsieh says. “It also had a great balance of being able to create value for people who wanted to get out and provide an entry point for institutions to come in.”

For Store Capital, it was the third company taken public since 1994 by CEO officer Chris Volk. The Store deal came with significant overhang. Oaktree Capital owns 70 percent of the shares, which it is likely to divest in the next five years, according to a Green Street report.

A number of smaller deals are in the works, with several companies having filed registration statements with the Securities and Exchange Commission in recent months. While the deals can get pulled, the filings give a window into intent. For example, Easterly Government Properties Inc., which focuses on acquisition, development and management of class-A properties leased to U.S. government agencies, filed in December for a maximum offering of $100 million.

Competition for Capital Could Hamper Volume

For these and other IPO prospects, they must compete against existing REITs, which raised $28.7 billion of common and preferred stock in 2014, according NAREIT data. That demand makes it harder for IPO aspirants to make their case.

“There are already REITs out there in most property types, so you already have choices,” says Scott Schaevitz, chairman of Americas real estate investment banking at Barclays. “People get excited about IPOs when they think the management team has an approach to the market that is differentiated and could provide superior returns.”

Sellers of equity might also shun IPOs for better deals elsewhere. Institutions, corporations and funds of various kinds are competing against public markets for assets coming up for sale.

“There is quite a bit of capital out there trying to buy all forms of real estate,” says Steve Buller, portfolio manager of Fidelity’s Real Estate Investment Portfolio fund. “They can at times offer a better alternative than selling it or listing it on the New York Stock Exchange.”

Multifamily is one area where private bidders are winning out. They’re pushing down capitalization rates and making a direct sale to institutions an easy choice, according to Seth. “Cap rates are lower for those assets in the private markets than they are in the public markets, so there is no reason to go public when you get better valuations as a private company,” he says.

It’s the path Blackstone took when it sold IndCor Properties, a portfolio of industrial properties, for $8.1 billion in December to affiliates of GIC, Singapore’s sovereign wealth fund. While Blackstone had taken Brixmor Property Group Inc. (NYSE: BRX) and Hilton Worldwide Holdings (NYSE: HLT) public in 2013, the firm likely got more money from an institutional fund than it could have on the public market. It had made necessary filings for a possible IPO while shopping the assets to investors. By closing a deal with an institutional investor, Blackstone went for a sure thing rather than waiting to see what an IPO would yield. “There is a lot of risk associated with going public versus an outright sale,” Buller notes.

Despite the large private deals, in most sectors the supply remains tight, representing another favorable condition for more IPOs. “The expectations are an OK economy—combined with little new development in most property types—is going to continue to support strong operating fundamentals,” Sullivan says.

“We will see more specialization and creation of expert verticals,” Seth says.  “You are going to see the whole smorgasbord of activity.”

So full steam ahead.

As some companies look to go public, private equity has its eyes on existing stock exchange-listed REITs. Blackstone has said as much. Jonathan Gray, head of Blackstone’s real estate arm, noted at a conference in New York in November that REITs are still below their 2007 highs.

In one potential step toward that end, Blackstone announced a deal in December to sell 26 assets in Northern California to Hudson Pacific Properties Inc. (NYSE:HPP) in a $3.5 billion deal in cash and stock. The transaction, expected to close in the first half of this year, would give Blackstone a 48 percent stake in Hudson. In February, Blackstone also agreed to buy a roughly 50 percent interest in a New York office portfolio from RXR Realty in a deal that values the assets at $4 billion.

Aside from REIT stocks staying below their peak, they also haven’t kept pace with property valuations, suggests Barclay’s Schaevitz. “While REIT share prices have performed well, they may not be keeping up with the Main Street real estate prices in some property types,” Schaevitz says.

That has made REIT portfolios potential targets for deals, according to Schaevitz.The last wave of privatizations was in 2005 to 2007, he notes. Stocks traded at a discount to real estate valuations, and inexpensive debt was aplenty. Those factors have lined up once again.

“It’s an opportunity to get a large portfolio of assets with or without the management team that is currently in place,” Schaevitz says. “Private equity shops can get scale in a certain property type.”

That said, these deals can be costly, according to Morgan Stanley’s Hsieh. Buyers of public companies must pay a control premium to acquire a controlling stake. The board needs to be willing to entertain the idea versus sticking with the status quo. There are defeasance costs and friction costs as they relate to taking out different kinds of securities. “You have to have a lot of conviction of what you are willing to pay for something to makes sense,” Hsieh says.

So while some private funds have an eye on REITs, snapping them up won't be easy.