REITs are proceeding selectively as they evaluate potential transactions.

When it comes to mergers and acquisitions for REITs, opportunism will likely remain the key theme of 2017.

As prices for commercial real estate continue to rise, selective deals like this are most likely to continue for well-capitalized REITs, which have the financial might and the ability to quickly finance purchases.

“You never know what the future will hold,” says Debra Cafaro, Ventas’ chairman and chief executive officer. “We are always ready. We can be very nimble in approaching opportunities that present themselves. Our speed, sophistication and experience enable us to win transactions that will benefit shareholders.”

Coming off a solid year, REIT M&A is likely to continue at a steady pace in various forms, including public-to-public and public-to-private deals and portfolio transactions, once uncertainty about interest rates dissipates and policy initiatives out of Washington become clearer. Spinoffs have and will also likely continue to be an attractive way for REITs to provide pure-play trades for investors, while initial public offerings might come back if the REIT market resumes an upward trend in terms of stock valuations.

“Transactional activity for REITs should remain healthy, but episodic,” says Neil Wolitzer, a managing director in real estate investment banking at Goldman Sachs Group Inc. “Companies are constantly looking for ways to create value in both their businesses and through strategic activity, such as M&A and other large-scale transactions.” 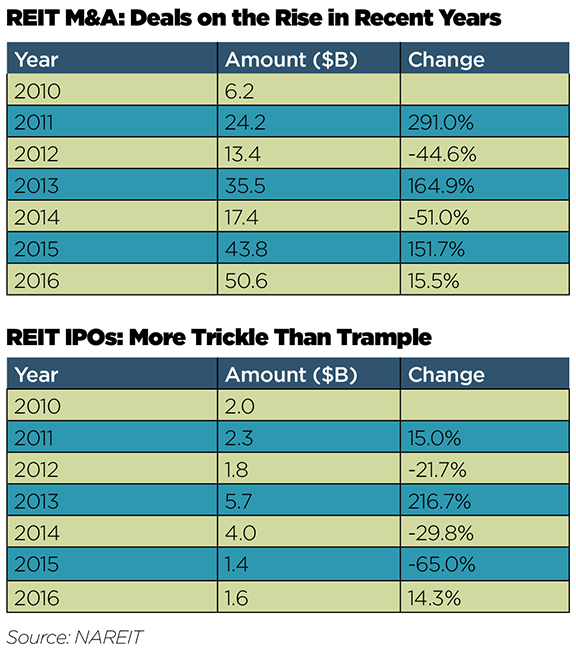 “Interest rates are the biggest wildcard in the discussion,” says Vivek Seth, vice chairman of investment banking at Raymond James. “To really establish a trajectory and trend, it will take the first half of this year to see how it goes with the next few Fed meetings and how the world macro environment reacts to all of this. Only then we’ll know whether we have a major or minor tightening cycle.”

If inflation resumes, rates on 10-year Treasury bonds will likely keep rising this year. Buyers could swoop in and buy up assets or REITs that are in sectors with shorter leaseholds, such as lodging and apartment REITs, notes Gil Menna, co-chair of the REITs and real estate M&A practice at Goodwin Procter. Combine that with a healthy appetite for yield by private equity and sovereign wealth funds, and deals could start flowing.

“There is going to be private capital chasing public REITs, either with portfolio or whole-company transactions,” Menna says. “Buyers will want to get in on the act on increasing cash flows on short-duration leaseholds if inflation starts to kick in.”

The direction of interest rates should be clearer in the second half of the year, leading to an acceleration of deal-making, particularly in a market where property prices are rising. While REITs have been selective in adding assets to their portfolios, they face a tougher market in terms of prices, which rose to nearly 28 percent above their pre-recession high last November, according CoStar’s value-weighted U.S. Composite Index. This makes it harder to buy class-A assets with a high enough capitalization rate to justify the purchase. The higher prices mean REITs could be more pressed to look at transactions in order to grow, says Larry Gellerstedt, president and chief executive officer of Cousins Properties Inc. (NYSE: CUZ).

“Looking forward, REITs, in general will continue to look at corporate transactions because we are late in the cycle relative to development and pricing of assets in the private market today is pretty frothy for REITs,” Gellerstedt says. “We have seen REITs do a whole lot of buying, so when you are in that position and looking to improve your company, you obviously look at transactions.”

Transactions of REITs being taken out by other REITs or private companies seem likely to continue once market clarity returns.

“There is a lot of interested capital out there to look at opportunities that perhaps don’t belong in the public markets or don’t have the skill to be in the public markets,” Seth says. “The also-rans, the weaker sisters, are definitely getting a lot more interest than at any point prior in this particular cycle.”

Wolitzer adds that getting a deal done requires meeting three conditions: It has to make strategic sense, the numbers have to work and the social issues of meshing two management teams must make sense. “Sometimes two of the three of those things can make sense, but what makes it so episodic is that it has to be all three.”

REITs below $1 billion in market capitalization also will be motivated to somehow work towards that level, which is viewed as a key threshold to attract institutional investors and obtain better financing terms.

“Bigger is definitely better as a theme,” Seth says. “You will see a lot more of that variety than mergers of equals. The reality is you need to have the size, attendant liquidity and investor following to be able to capitalize on industry trends and raise the money you need to continue to grow.”

Outside of normal M&A activity, spinoffs have been a common tool by REITs and likely will continue, given investor appetite for pure-play companies. Hilton Worldwide Holdings (NYSE: HLT) did so recently with the bulk of its hotel real estate holdings, creating Park Hotels & Resorts (NYSE: PK). Ventas spun off the bulk of its skilled nursing facilities in 2015, creating the REIT Care Capital Properties Inc. (NYSE: CCP). Vornado Realty Trust (NYSE: VNO) in 2015 offloaded the bulk of its retail holdings into Urban Edge Properties (NYSE: UE). Last October, Vornado also announced that it would spin off its Washington, D.C., portfolio into a combined company with JBG Cos. The new publicly traded REIT, to be called JBG Smith Properties, is expected to begin trading by the end of the second quarter.

Similarly, Cousins Properties spun off Parkway Inc. (NYSE: PKY) after buying Parkway Properties Inc. in October in a stock transaction worth about $3.5 billion. The overlap of the two companies’ Houston office portfolios spurred the structure of the deal, Gellerstedt notes. The fallout from a 60 percent drop in oil prices during 2014 and 2015 put a damper on both companies’ stock prices. By merging the two companies and spinning off the Houston assets, the resulting company could realize its value and separate out the more-volatile Houston portfolio.

Two weeks before the deal was signed in April 2016, Cousins traded at 18 percent below NAV, according to Green Street

Advisors. In January, the merged Cousins traded at a 2.4 percent discount to NAV.

The combination of Cousins and the original Parkway highlights how it still makes sense for REITs to combine if the price is right. The portfolios of both companies also overlapped in high-quality submarkets, such as Atlanta, Charlotte, and Austin, Texas.

“One thing in the office space that does help you from a results standpoint is if you have concentrations in high-barrier submarkets,” Gellerstedt says. “That brings you the ability to bring multiple options to a customer and also get operating leverage in that market.”

Of course, the larger REITs can call their own shots.

One route is to stay the course and eschew big deals, instead buying and selling assets. Duke Realty Corp. (NYSE: DRE) has taken that approach with its industrial and medical office building portfolios.

“Most companies have enough critical mass to not do anything,” says Jim Connor, Duke Realty’s CEO. “The real estate is pretty good. The markets are pretty good, particularly for our two product types. So if I don’t do anything and just run my company well, I should be able to report really good growth, grow the dividend and keep my investors happy. When you balance that against going out, doing a deal and paying a huge premium, it’s really hard to believe you can justify that.”

Regardless, REITs will continue be selective when it comes to acquisitions. Ventas’ Cafaro sums up the industry’s prudence: “We are bidding on assets where we have unique opportunity or the assets have some significant upside or unique characteristics we think will create value.”

While REIT M&A activity was steady, IPOs slowed to a trickle in 2016. Three deals worth a total of $1.5 billion were announced during the year, far from the recent peak of 19 IPOs in 2013, representing $5.7 billion.

In early 2017, the single-family rental REIT Invitation Homes Inc. (NYSE: INVH) raised nearly $2 billion via its IPO. It is unclear, though, if that signals the start of any significant acceleration in REITs going public.

“You need a discernible, upwardly mobile trend for investors to bank on,” Seth says. “Anytime you have seen a big wave of IPOs, it’s occurred after some move of stock prices has clearly been established, rather than trading in a range.”

Private players looking to go public will also want to see more stability with interest rates and more clarity on what will happen with tax reform in Congress.

“In a world where you have a 15 percent corporate rate and you end up in an environment with no depreciation deduction and no interest expense, that’s a very different world for investors,” Seth says.