A rigorous plan to identify and develop new leadership is seen as a key responsibility for CEOs and their boards.

In 2014, Havner, then chairman and CEO of Public Storage (NYSE: PSA), approached the Glendale, California-based company’s board with the news that he was ready to leave the top job after being with the company for nearly three decades. “When I told the board, I thought it would take a year or two. It took a little longer,” he recalls.

A similar story happened at Cousins Properties (NYSE: CUZ). Three years ago, former CEO Larry Gellerstedt and the company’s board put together a formal succession plan in anticipation of Gellerstedt stepping down. In September 2018, Cousins announced that President and COO Colin Connolly would take over as CEO of the Atlanta-based REIT at the start of the new year. Meanwhile, Equity Residential (NYSE: EQR) officially said in September 2018 that longtime CEO David Neithercut would retire at year-end, with CFO Mark Parrell taking over the CEO role.

Indeed, when it comes to changing the guard at REITs, most companies recognize the importance of succession planning, a process of identifying, nurturing, and mentoring rising leaders so that any change in the top ranks is reassuring to employees, analysts, and investors.

“REITs have been positioned and structured to deliver a steady and growing yield, so anything including a change in management is seen as a risk factor that can impair future earnings,” says Robert Baron, partner and national practice leader for real estate and infrastructure at global search firm Odgers Berndtson.

When dealing with companies with market capitalizations that can surpass $1 billion and ownership of real estate that affects every consumer, this is not something to be taken lightly. “A rigorous succession planning process is one of the most important responsibilities of the CEO and the board,” Gellerstedt says.

For these reasons, successors are often carefully groomed. In these three C-suite changes, the CEOs invested and devoted the time needed to ensure their successors were ready for the job from day one. At Public Storage, that meant transitioning Joe Russell, the designated successor, from his role as CEO of PS Business Parks (NYSE: PSB), which was spun off from Public Storage in 1998. Russell joined Public Storage in 2016 as a president.

Russell attended Public Storage board meetings, got to know directors, and learned the operations of the company’s 161 million net rentable square feet of real estate. (To ensure a smooth transition for both companies, a new CEO for PS Business Parks—Maria Hawthorne—was groomed for the CEO role she assumed in 2016 as Russell left.) “I’ve been well mentored by Ron and others,” Russell says. “I’ve learned many things, from the senior management team right down to the field-level employees.”

At Cousins, Connolly, who, joined the REIT in 2011, became president in 2017. It quickly became apparent that he was ready to rise. Gellerstedt was thrilled. “I was so enthusiastic about Colin as CEO, I would have stayed a couple of more years, if needed. I was thrilled the additional time was not required, which I never felt it would be,” he says. “My greatest joy is leaving the company with an extraordinarily talented leader and executive team which will carry the company to new heights in the future.”

Connolly, a first-time CEO, says he appreciated the nurturing he received. “The CEO role is a big change. Having familiarity with the board, the team, and the strategy is extremely helpful.”

At Equity Residential, Parrell, who joined the company in 1999, was being groomed for a role that was only a possibility, he says. “The process of getting me ready to be a candidate for the job occurred over several years. During that time, I was intentionally exposed to functions of the company outside the finance area, and I worked on several company-wide initiatives,” he recalls. “It was understood by me and the Board that there was not a definite timeframe or even decision on the next step.”

However, he became the Chicago-based company’s president in September as the transition became public. Neithercut will remain a member of the board, according to the company.

Both Havner and Gellerstedt will remain on as chairmen. Gellerstedt plans to stay on as executive chair for one or two years. Havner, meanwhile, doesn’t say how long he’ll remain as chair, but he’s welcome to stay. “Ron’s got great historical knowledge,” Russell, his successor, points out. “He’ll have the opportunity to engage, mentor, and help all of us for many years.” 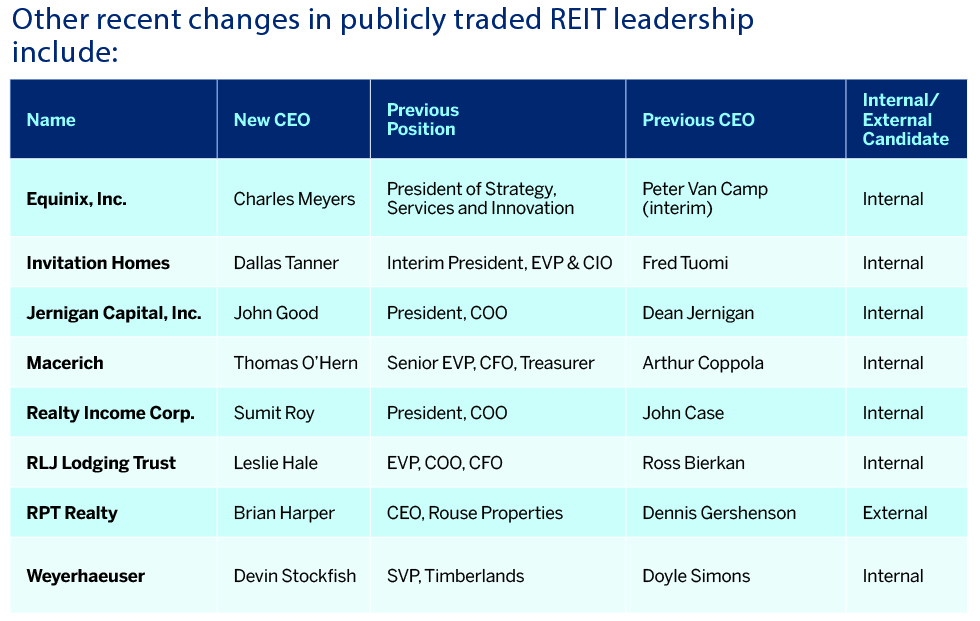 At Equity Residential, Parrell observes that Sam Zell, the company’s co-founder and chairman, “has called succession planning one of the most important responsibilities of a board.”

If you’re a REIT that doesn’t have a succession plan in place, the time to start is now. If the CEO made one at some point and it’s sitting on a hard drive somewhere, that’s not enough, either, according to experts. The best plans are overseen by the board, with assistance from senior leaders, and they’re are frequently updated to reflect the changing macro environment and dynamics within an industry and the company.

While the CEO can’t alone guide succession planning, he or she certainly needs to advocate for the process. “Commit to it by making sure that you have buy-in across your senior leadership team. Be accountable at each level of the organization and to the board,” Parrell advises. “Set aside specific time on board and/or committee agendas to discuss succession and take opportunities to expose high potential candidates to the board.”

The best executive succession designs take a comprehensive look at all critical areas of the company, consider the organizational strategy, and plan for both the long- and short-term, even if the CEO doesn’t plan on going anywhere for some time. If nothing else, the planning helps identify a robust talent pipeline for a number of critical roles in the organization. But, “if something voluntarily or involuntarily happens to your leader, you are much better prepared than if you had no plan at all,” Dominic Cottone, a managing director in Ferguson Partners Leadership Consulting group, who conducts succession planning for organizations, says.

A big part of succession planning involves crafting a big-picture strategic plan for the company. Senior leadership, particularly those on executive committees, should be constantly evaluating employees to determine their current strengths and what development they need to prepare for the next level. Leaders of functional areas “should be required as part of their annual review to state who would be designated to step into their role at least on an interim basis in the event that they were suddenly incapacitated,” Baron at Odgers Berndtson suggests.

Gellerstedt points out that Cousins carried out a formal succession planning process each year during his tenure, which included the top three levels of the team. He also discussed CEO succession planning each year in executive session with the board and reviewed possible candidates—both internally and externally.

“Succession planning should be a continuing process at three levels—board membership, CEO, and sub-CEO senior executive—and in two circumstances: a sudden, unplanned vacancy and a longer-term, more anticipated one,” says James Hanks, Jr., a partner with Venable LLP, a law firm known for its work with REITs.

After agreeing to his promotion, one of the first things Public Storage’s Russell was told was to find his successor. “It can feel a little awkward when you’re told we’re going to put you in your new role and now you need to find someone to take your place,” he admits.

When done well, succession planning can even help with more than one change at once. In addition to Neithercut’s retirement, Equity Residential’s COO retired in 2018 as well. “The transitions were well-received, both internally and externally, because we have a process in place,” Parrell says.

Ingredients for a Leader

Identifying people for the top role is far harder than one might think. First, it’s natural for someone to hire in his or her own image, according to Baron. “The reality is that the skills and attributes that were required to grow the REIT for the last 25 years may be quite different from the ones required to manage an enterprise of the scale of the current REIT.”

In real estate, deal makers often rise to the top, but that alone isn’t enough. “You get a lot of execution-oriented leaders who are quick to make a decision,” Cottone says. “There’s an expectation around execution.”

Cottone also looks for leaders with a breadth of experience that involves enterprise responsibility across an organization and people who can balance motivating employees while holding them accountable. People management experience is critical, Cottone says. “It’s a challenge for leaders to try and figure out people matters, which are often a large part of a CEO’s role,” he says. “There’s a lot of listening that goes into it.

I think there’s a lot of value in listening more than you talk.”

The best candidates for the role understand that the position carries immense responsibility. Questions Cottone likes to ask in his assessments include: “What are you going to do that’s going to transform the organization that’s also going to have a greater impact on society?” and “How are you actually innovatively transforming the environments outside of the organization?”  Ideal CEOs are “few and far between,” he admits. “They are required to have many different leadership characteristics that are difficult to exhibit, unless developed over time. But when I come in touch with these leaders who balance a transformational vision with the ability to inspire people, it’s life-changing.”

Cedrik Lachance, director of REIT research at Green Street Advisors, likes to see skills including being a good steward of capital, balance sheet management, and high-quality performance at the asset level. He prefers “someone who is strategically minded, capable of defining a clear vision for the company, and someone who has these skills to empower those around him.”

Finally, Hanks stresses the importance of ensuring the person is comfortable with and matches the REIT’s culture. A high-flying New York executive might not fit in a more genteel middle-America REIT, and vice versa. “REITs, like all companies, have varying cultures and the candidate ought to be comfortable with it or be able to point out how he or she thinks the culture ought to be adjusted and for what reasons,” he says.

With all those boxes to check, it’s no surprise that succession planning can take significant time. But, if the proper planning is in place, an executive’s decision to retire or exit should simply follow the plan. Cases where the plan was well thought out and followed, and dramatic change isn’t needed, the transition should be smooth for everyone involved.