A look at the role REITs are playing in the next generation of wireless technology.

The advent of fifth generation (5G) wireless systems is coming ever closer to reality, as several wireless companies have already announced their intentions to release compatible devices this year, creating greater connectivity between people, things, and infrastructure. As with previous “Gs,” tower and data center REITs will play a vital role globally in enabling this new generation of technology to get to the market efficiently.

5G is expected to help facilitate the increasing proliferation of the “internet of things” (IoT) and more advanced machine-to-machine technologies. It will bring an exponential increase in data speeds that will change how people interact with the internet. For example, download time for an HD movie could go from an hour to a few seconds. 5G can also power up remote surgery, and some say truly autonomous vehicles aren’t possible without it.

Evan Serton, senior vice president and portfolio specialist at Cohen & Steers, says one should consider the wireless network as a toll road: 5G will have significantly larger lanes for wireless traffic and dramatically higher speed limits than the current 4G technology.

New 5G capabilities can be used by service providers to extend their reach for their enterprise mobile customers. In turn, enterprises can harness wireless-based technologies such as the IoT to provide new services to mobile users. 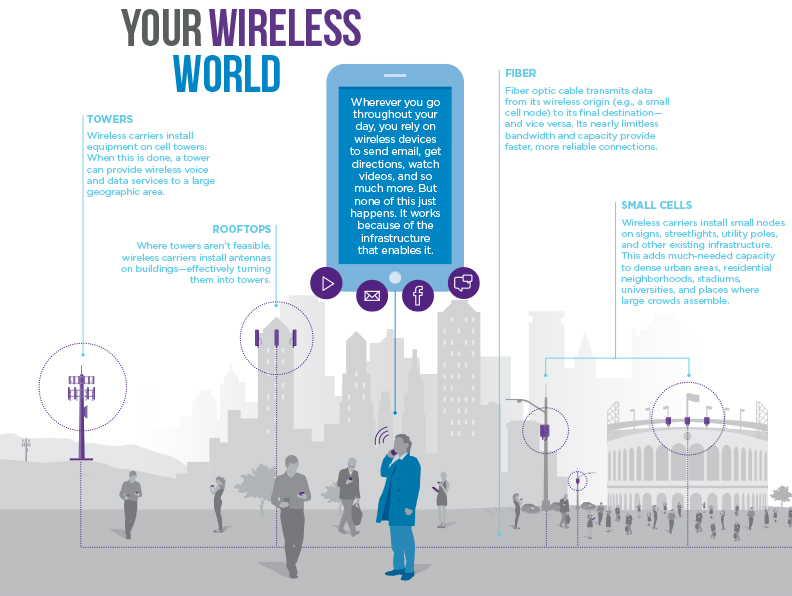 Dan Schlanger, senior vice president and CFO at Crown Castle International Corp. (NYSE: CCI), says the company has prepared for the rollout of 5G for close to a decade, beginning with owning 4,000 towers and expanding into 60,000 small cells, with 60,000 miles of metro fiber throughout the top metro markets in the United States.

“We are very well positioned for what 5G will become,” Schlanger says. “The way we define it is [as] really ubiquitous, high-speed, low-latency coverage to allow people to access their data wherever they are and however they want it.”

Jim Poole, vice president of business development at Equinix, Inc. (Nasdaq: EQIX), says this is where the data center REITs come into the picture. 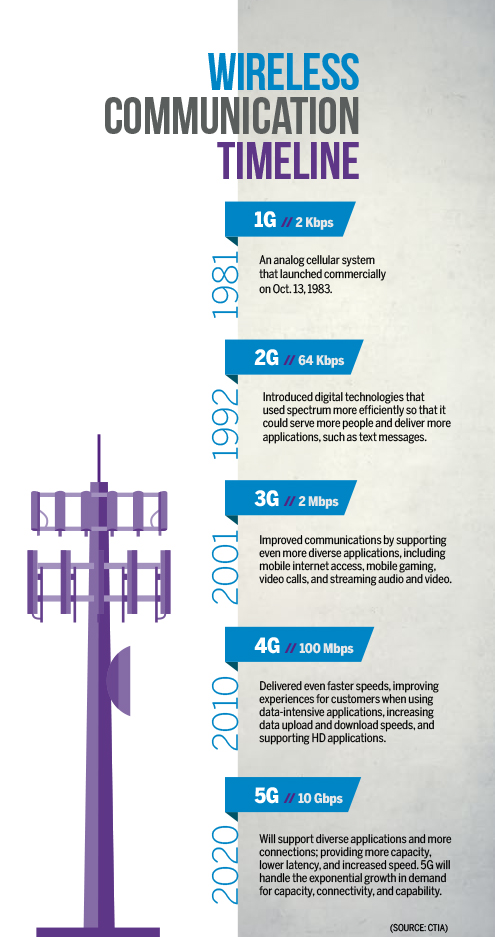 “We deliver interconnection to companies, which is the private data exchange between businesses,” Poole says. “It is the fastest, most secure, lowest-latency connectivity there is, and will be a critical part of the 5G revolution.” Equinix’s global interconnection platform allows companies to access their clouds, networks, data, and partners directly, so they can connect to whatever they need, wherever they need it, he adds.

Ed Knapp, senior vice president and chief technical officer of American Tower Corp. (NYSE: AMT), says the REIT’s macro towers are well-positioned to capture the deployment of 5G technology on spectrum bands like 600 MHz and other low- and mid-band spectrum assets, including those that have historically been utilized for suburban and rural deployments.

“We expect to continue to invest in digital infrastructure assets for in-building services and neutral host solutions, contingent on the availability of attractive returns,” Knapp says. “Additionally, as 5G evolves, there may be opportunities for us to explore new assets and develop relationships with new customers.”

In a second quarter earnings call, SBA Communications Corp. (NASDAQ: SBAC) President and CEO Jeffrey Stoops said that in many cases, 5G deployments will require the use of new, non-interfering multiple outlet (NIMO) antennas, which are bigger than typical antennas and take up incremental capacity at tower sites, driving revenue opportunities across the industry. “With only a small fraction of this deployment happening over the last several quarters, the vast majority of the opportunity is still in front of us,” he said.

What is perhaps even more important for tower REITs over the next few years is network densification initiatives, which will be necessary for suburban and rural 4G networks to keep up with the continuing exponential growth in mobile data usage.

“We believe carriers will need to continue to make material investments in their 4G networks, given that near-term 5G mobile deployments are likely to be an incremental complement to 4G, rather than a replacement,” Knapp says.

The Pros of 5G

5G is a significant evolution from wireless capabilities that are currently available. It isn’t a single technological innovation, but rather a series of advances in communication.

“The move to 4G was a big leap when it happened, but 5G will enable so much more,” Poole says. “Speed 10 times over

4G is a common estimate, with variables such as whether a carrier prioritizes range over speed affecting just how much quicker 5G will be.”

Latency: The time required for a packet of data to travel back and forth between two points.
Low Latency: Quick reaction time.
Neutral Host Solutions: Systems that will aggregate and consolidate traffic from many smaller systems and feed through to the major networks.
Small Cells: Because 5G needs a larger infrastructure than what’s now in place for 4G, portable mini base stations, or small cells, are being utilized. These require minimal power and can be placed every 250 meters throughout cities to create a dense, flexible network.

5G latency can dip to 1 millisecond, when the end user and target platform are close—within 4 to 6 miles of each other. 5G standards allow for exponentially wider bands than 4G and major increases in bandwidth. New technologies like ultra-HD video, augmented reality, and connected self-driving cars consume large amounts of data and will benefit from this greatly.

For instance, Intel estimates that a continuously connected self-driving car would consume as much data in a 90-minute ride as 1,000 smartphone users would in an entire month. In addition, 5G may help to drive the proliferation of various internet-enabled household items such as refrigerators, heating and cooling systems, and lights.

“5G networks will also be able to better keep pace with the explosive growth of the IoT and all its current and yet-to-be discovered applications, as 5G enables up to one million connections per kilometer at very low power,” Poole says. “And, 5G makes mission-critical control possible with 1 millisecond latency, opening the door for new applications that demand absolute reliability.”

The benefits of 5G, Crown Castle’s Schlanger notes, are still not 100 percent clear. However, he expects to see developers come in and utilize the technology in ways that have never been dreamed before—much like Uber and Waze have done with 4G. 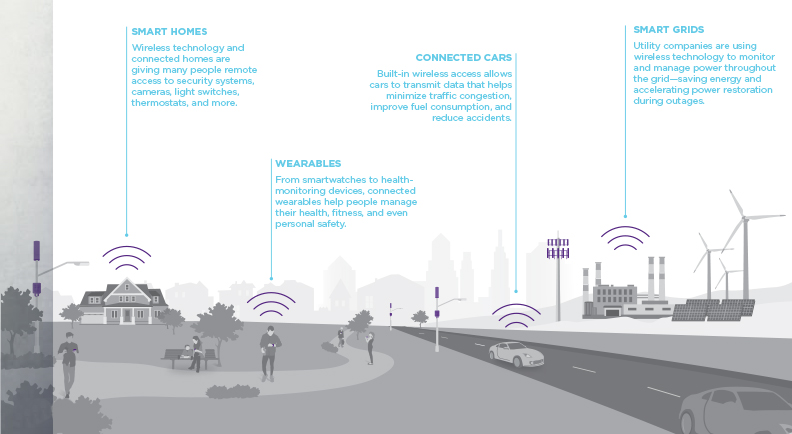 The internet revolution changed the way we use computers. Then wireless internet came along and made our phones smart and tablets possible. But that was just the beginning. Wireless data is changing the way we exercise, drive our cars, manage our homes, and even deliver power to our cities. It’s called the “internet of things.” And REIT-owned infrastructure is enabling the wireless connections that make it possible.

“The use cases on the forefront of it are things like fixed wireless to the home to supplement or compete with broadband via fiber optic or coaxial cable; augmented realty; and the IoT,” he says. “We’re not exactly sure where it will lead but we provide the underlying infrastructure for anything to happen in 5G or wired connectivity, and [to] take advantage of however it evolves.”

5G is a new technology and has the potential to significantly enhance the mobile ecosystem, which may bring with it opportunities for a number of parties to monetize new use cases.

“Investors are naturally drawn to opportunity, and 5G represents an extension of the mobile revolution that has transformed all aspects of our lives over the last several decades,” Knapp says.

Serton at Cohen & Steers says as improvements in wireless technology have a strong correlation to tower leasing activity, the rollout of 5G standards over the next several years will be a significant benefit to REITs that own communications infrastructure, especially in terms of the earnings and cash flow that they generate.

“Each new generation of wireless technology has required a greater level of investment from U.S. carriers, which closely correlates with tower leasing activity,” Serton says. “We believe 5G will be a continuation of this trend.”

The Need For High-Density Deployment

According to Poole, operators will need to massively deploy small cell technology in extremely high densities at the edge of the network, where their users are consuming services. In a typical city neighborhood, for instance, dozens of shoebox-sized small cells might be mounted on public infrastructure, like telephone poles and street lights. In less-populated areas, operators will need to significantly increase the density of existing networks by building macro cell sites along the way.

Poole notes that the need for high-density IT deployments isn’t just about a data influx or the need for proximity. Many 5G network operators say they plan to maximize data speed by using millimeter wave—extremely high frequency spectrums,” he says. “But millimeter wave also has limited range and can be disrupted by conditions as common as humidity and rain. Heavy concentrations of small-cell technologies are needed to offset that.” 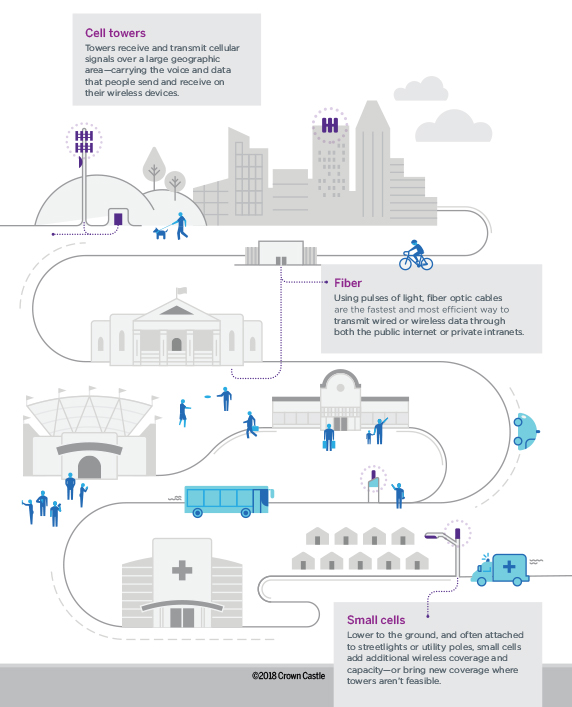 In a second quarter earnings call, Crown Castle President and CEO Jay Brown said the company’s investment in small cell technology will create “decades of opportunity,” just like the acquisition of towers did in the late 1990s. He added that one of the things Crown Castle learned from its experience in towers is that “investing early in the right assets in the top markets positions us to capture potential future demand that may arise beyond what is visible at the time of the investment, as communications evolve in ways we can’t even conceive today.”

Work To Be Done

Depending on the spectrum being utilized, additional sites for coverage and capacity will be needed to support 5G functionality on a commercial scale, Knapp says. “We are focused on ensuring that we are supporting the industry as the path to 5G becomes clearer.”

Networks will be tested and 5G-capable devices will be available for consumers and businesses sometime next year. The first 5G specifications are complete, but there are additional features and specifications in the plan for future releases that will incrementally formalize the specifications and expand addressable use cases.

It’s important to remember that network evolution takes a long time. Just because 5G has been introduced doesn’t mean that everyone will be using 5G devices immediately. A perfect example of this is 4G today, which was first launched in 2010. Eight years later, around 20 percent of subscribers still are not using 4G networks and devices.

“Given the spectrum depth requirements to support the 5G standards and the limited availability of low band spectrum, we anticipate that 4G networks will continue to support a significant portion of the mobility aspects of carrier networks well into the future,” Knapp says.

There’s still plenty that is unknown about 5G so what comes after is still up in the air to some degree. While the industry is well aware of technologies like connected, driverless cars and VR, new IoT applications will surely arise once the 5G standard is a reality.