REITs are taking the lead in bringing renewable energy sources into real estate with both on-site and off-site solutions. These efforts are expanding and evolving as companies continue to explore creative, cost-effective solutions.

Renewables represent a growing part of the U.S. power supply. About half of the estimated 25 gigawatts of new electricity added to the United States’ power grid in 2017 came from renewable resources, according to the U.S. Energy Information Administration.

Some of the factors fueling the push toward green energy are corporate social responsibility, cost, and customer demand, experts say.

Aaron Binkley, director of sustainability at Digital Realty Trust Inc. (NYSE: DLR), observes that businesses are increasingly looking to locate in facilities that have renewable energy programs in place. For example, nine of Digital Realty’s top 20 customers have their own renewable energy goals. “That is a significant share of our customer footprint, and they are not just dabbling in renewables, they have announced specific targets for sourcing renewable clean energy,” he says.

Across sectors, REITs are responding to current and potential tenants who are making bigger commitments to sustainability and the use of renewable energy. For example, two-thirds of companies in the S&P Index have sustainability or energy reduction goals in place.

"There are big players driving this, and that offers a glimpse of what’s ahead for the commercial real estate business,” says Gary Graham, director of energy management, global occupier services for Cushman & Wakefield.

“More property owners and building occupiers are realizing the benefits of renewable energy, both in terms of the cost savings it can deliver for customers and the enhanced value for investors,” says Matt Singleton, senior vice president, global energy at Prologis (NYSE: PLD).

In many areas of the country, wind power is cheaper than fossil fuel power, while solar is about the same price. In addition, companies are able to buy renewable energy on long-term contracts at fixed prices, which helps to eliminate pricing risk of future energy cost increases. “This now has strong acceptance and momentum, and we expect continued interest in the face of both climate change and the drop in prices of renewables,” says David Rinard, senior director of global sustainability and strategic sourcing at Equinix (Nasdaq: EQIX).

The starting point in renewable resources for many REITs has been to add rooftop solar systems to generate power on-site.

GGP (NYSE: GGP) introduced its first solar systems at five malls in 2013 and has since grown its solar program to include 44 properties. Combined, the REIT has installed more than 50 megawatts (MW) of solar generating capacity. In fact, two of GGP’s properties are close to net zero properties.

“We see solar expanding in our company. We want to use it everywhere we can,” says Brian Montague, senior vice president of asset management at GGP. “It’s great for the environment, and it’s also something that benefits the company, the shareholders and every one of our constituents.”

Kimco Realty (NYSE: KIM) was one of the first REITs to self-develop renewable energy projects. The firm invested more than $10 million for on-site solar rooftop systems at six New Jersey properties between 2007 and 2009. Combined, those projects host 3 MW of installed solar capacity. Those early projects represented a sizable pilot project for the company.

“We really wanted to see how the technology functioned and validate some of our assumptions before we decided to do more,” says Will Teichman, senior director, strategic operations at Kimco.

Kimco is now moving forward with additional projects. The company signed an agreement this spring with a provider who will develop solar on three of its New York metro properties that will double capacity. Those projects are expected to be up and running by the end of the year.

As Teichman explains, solar is typically installed on a new roof membrane, which usually has a 20-year lifespan. “What we are looking at in terms of how we roll this out is to marry up our solar ambitions with our normal capital roof replacement schedule,” he says. The company also plans to look at opportunities to add solar to properties undergoing redevelopment or expansion.

Another trend across the commercial real estate industry is that more projects are being built “solar-ready” with infrastructure, such as reinforced roofing, conduits, and space for equipment, so that the property can more easily accommodate solar in the future. “I see a little more of that pre-design work for solar in new buildings and major refurbishments, and also that it is being taken into account in the financial analysis in developing new buildings,” Graham says.

Deciding on whether to add solar is occurring on a case-by-case basis that considers the location, as well as age and condition of the roof. Solar is more suitable to properties that have large, open rooftops with good sun exposure. 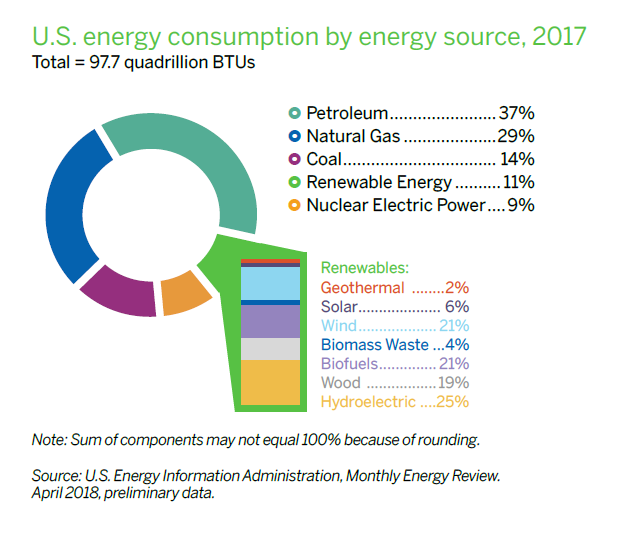 One of the biggest financial incentives used to offset the cost of adding solar is federal tax credits. However, those tax credits are very difficult for REITs to monetize due to the fact that they do not pay corporate-level tax to the extent they distribute dividends. So, in order to receive a financial benefit, entities have to file a tax return with liabilities that are greater or equal to the amount of the tax credit. That change has prompted some restructuring and creative thinking to look at alternative solutions. Some REITs have formed taxable REIT subsidiaries to cash in on those incentives, while others have opted for alternatives such as selling green certificates to help fund renewable energy projects.

Kimco is putting a new ownership structure in place for its latest solar projects currently underway at its three New York metro properties. The REIT signed an agreement to lease its roof space to a third-party solar developer who will develop and own those solar systems, and the third-party will be eligible to receive the federal tax credits. “We are still participating in the economic benefit of the power and the system being there and producing power, but the structure of ownership is different,” Teichman says.

One particular challenge for REITs exploring renewable energy is the split risk/benefit model, adds Singleton. “This means that the property owner does not always share in the economic benefit because customers commonly hold the power bills, yet customer lease terms are often insufficient to support renewable project economics,” he says. These factors can impact project financing, which also involves the monetization of federal tax-based solar incentives that may or may not be a fit for a REIT.

Prologis is focused on bridging this gap to better align the risks and incentives amongst the parties. For example, the REIT has a 3.8 MW solar installation ongoing in California, which was developed and executed in partnership with the customer, third-party developer and investor.

REITs are also looking at ways to source green power off-site with alternatives such as green power purchase agreements (PPA). 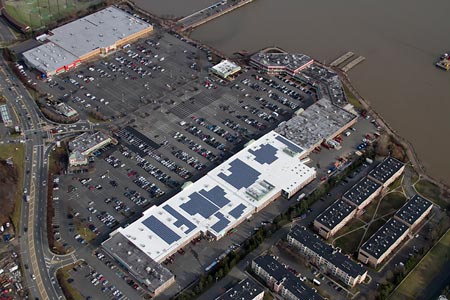 “I do think there is an evolution from picking up easy wins on rooftops. If you can get 10 percent of your load from on-site solar, where do you source the other 90 percent?” says Binkley. “I think that is where we are starting to see REITs looking beyond the four walls of their property to see where they can move the needle with larger scale sourcing.”

Iron Mountain Inc.’s (NYSE: IRM) early green strategy was to develop on-site renewable energy sources where they could own or use a PPA to get solar installed on their roof tops. “It is very direct, very visible and extremely cost effective,” says Dan Anninos, vice president of facilities program management, real estate & facilities at Iron Mountain.

But the fact that data centers use far more power than they can produce from rooftop solar systems led Iron Mountain to look at purchasing green power created elsewhere. A first phase of that was direct energy contracting in deregulated markets where the company could contract for renewable energy. The next step was engaging in virtual power purchase agreements (vPPAs) where Iron Mountain could forward buy the energy production from a new wind farm that had yet to be constructed.

“The nice thing about that from a financial point of view is that it gives us very stable rates. We know exactly what our rates are going to be for the next 15 to 20 years. And frequently we project that those prices will be below market,” says Anninos.

As the renewable energy industry continues to grow, REITs are collaborating on best practices and working together to find solutions. For example, Nareit’s Real Estate Sustainability Council is an important working group of REITs that share information and collaborate on issues and solutions. A number of the group’s members, including Digital Realty, Prologis and Kilroy Realty Corp. (NYSE: KRC) among others, have strong energy programs and are leaders in renewable energy and battery storage technology deployment.

REITs are also finding more options as the renewable energy sector continues to evolve. In April, Digital Realty announced that it would transition its 365 Main Street data center in San Francisco to the Hetch Hetchy Power System, which is operated by the San Francisco Public Utilities Commission and comprised of three hydroelectric powerhouses. By making the switch, Digital Realty is expected to reduce its greenhouse gas emissions by 24 million pounds of carbon dioxide per year. “The utilities in many cases are proposing new and more innovative green tariff solutions that allow customers to get the renewables that they want,” Binkley says.

Meanwhile, Digital Realty is seeing more community solutions, such as community solar programs that bring more renewable energy into the local power supply. “We’re excited to see these options. We like to see that competition and the opportunity to bring in more renewables cost effectively,” Binkley adds.

REITs realized very early on that the on-site solar projects that have succeeded in creating net zero results across other commercial and residential properties would not come close to satisfying the voracious demand for power at data centers.

“If we were to cover the rooftop of a typical data center with solar panels, we would offset maybe 0.5 percent of the building’s energy needs for that year,” says Aaron Binkley, director of sustainability at Digital Realty Trust Inc. (NYSE: DLR).

REITs have been forced to look at larger scale solutions, such as working directly with power suppliers or going direct to the green energy market to bring renewables into the portfolio.

Data center REITs also are leading the charge on complex transactions, such as virtual power purchase agreements (vPPAs) that contract for differences between the fixed renewable prices and a wholesale price settled on the grid at either the hub or the node. Essentially, vPPAs provide a price hedge for REITs and for their customers where energy is a pass-through expense with long-term agreements that are typically structured for 10 to 20 years.

Digital Realty signed its first PPA in 2016 to buy 88 MW of wind power in Texas. The REIT has since done two additional deals, including one for 76 MW of wind in Illinois and another 20 MW of solar in North Carolina. “We are looking in that direction, because that’s where we can get the scale to move the needle for our building energy footprint and for our customer’s energy footprint,” says Binkley.

In 2015, Equinix (Nasdaq: EQIX) signed agreements to be an off-taker, or buyer, from two large utility-scale wind vPPAs—125 MW of wind in Oklahoma and 100 MW of wind in Texas. “Beyond the vPPA model there must be other acceptable ways of procuring renewable energy for a geographically-dispersed load as Equinix and many REITs have,” says David Rinard, senior director of global sustainability and strategic sourcing at Equinix.

Equinix is about 75 percent of the way towards meeting its long-term goal of using 100 percent clean and renewable energy across its portfolio.