CubeSmart continues to build name recognition to go with a bigger portfolio of self-storage properties and services. 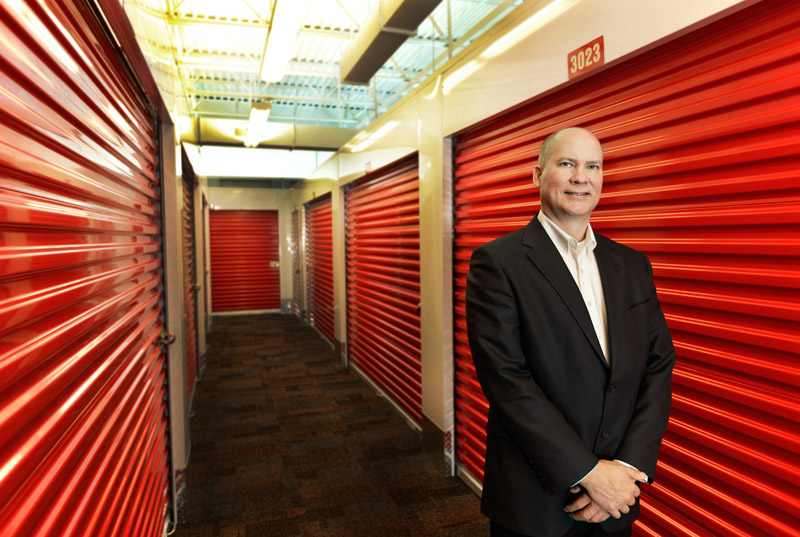 A year ago, Christopher P. Marr succeeded his longtime boss and mentor Dean Jernigan as chief executive officer of CubeSmart (NYSE: CUBE), one of the country’s largest owners of self-storage facilities and the sector’s third-largest publicly traded REIT. Marr took the helm of a company that has come a long way since he joined it in 2006.

In the past eight years, Jernigan, Marr and Timothy M. Martin, the company’s current CFO, have steered CubeSmart through the Great Recession and made big improvements to its portfolio, balance sheet and operating platform. The company, which was previously called U-Store-It Trust, was staggering under the weight of rapid expansion, and its portfolio was suffering from above-average vacancy rates.

Today, Malvern, Pa.-based CubeSmart is taking full advantage of the strong rebound in its sector and has moved out from behind the shadow of its larger peers.

Jernigan was already a well-regarded industry veteran when he joined CubeSmart in April 2006. He promptly hired Marr, who had worked under him as chief financial officer of Storage USA Inc., a publicly traded REIT that Jernigan founded in 1994 and years later sold to a unit of General Electric Co. Marr joined CubeSmart in June 2006 as its chief financial officer and treasurer. In late 2008, he was named president and chief investment officer. In 2012, he also assumed the role of chief operating officer.

Cubesmart At A Glance

In a widely anticipated transition in January 2014, Jernigan retired, and Marr became president and CEO. Marr also joined the company’s board. Among other key management changes, Joel Keaton was promoted from vice president of marketing to senior vice president of operations, taking over responsibility for direct oversight of store operations from Marr.

“Chris Marr and Tim Martin were instrumental in the positive changes we have seen at the company over the past few years,” says Ryan Burke, an analyst at Green Street Advisors. “They absolutely provided a steady hand on the wheel.”

Marr, 50, has spent the majority of his career in the self-storage sector. After helping with the sale of Storage USA in 2002, Marr joined Brandywine Realty Trust (NYSE: BDN), a stock exchange-listed office REIT. He served as Brandywine’s chief financial officer for four years before reuniting with Jernigan at CubeSmart.

“The fundamentals of the self-storage sector are so strong, and I find the business to be incredibly interesting. I relished the opportunity to get back involved with a sizeable platform,” says Marr, explaining his decision to join CubeSmart. He and Jernigan promptly embarked on a dramatic repositioning of the company’s portfolio.

As the company’s CEO, Marr plans to continue to refine the improvements that Jernigan began implementing. CubeSmart has sold nearly a third of the properties it owned in 2006 and recycled the proceeds into nearly $2 billion of acquisitions, according to Green Street. With the heavy lifting complete, CubeSmart is now largely focused on further improvements to its portfolio through acquisitions and development, Green Street reports.

CubeSmart has a much smaller portfolio than the two largest REITs in the sector, Public Storage (NYSE: PSA) and Extra Space Storage Inc. (NYSE: EXR). However, Marr says its portfolio is “at the top of the heap” from a demographic perspective thanks to the repositioning. The company, he explains, has reduced its exposure to slower-growth, low-barrier-to-entry markets, such as the Gulf Coast between New Orleans and the west coast of Florida. At the same time, it has made acquisitions in densely populated markets with high median incomes.

In 2011, CubeSmart made a transformative acquisition in New York City, purchasing a $560 million portfolio of 22 class-A facilities from privately held Storage Deluxe. That same year, it rolled out an $8 million rebranding campaign, changing its name from U-Store-It Trust to CubeSmart. The campaign, says Marr, has both alleviated confusion among consumers and boosted name recognition.

“In the New York City market, a large percentage of our customers go online and do a direct search for us to start the process of finding storage space that meets their needs. They do that because of the power of our brand in that market and others,” Marr explains.

CubeSmart is now a market leader in New York City, where it has made smaller acquisitions and undertaken some development since the Storage Deluxe deal. It is also a major player in the Chicago, Dallas-Fort Worth, and Washington, D.C, metro areas. In all, the company owns nearly 400 facilities containing about 26 million rentable square feet in 20 states and the District of Columbia. It also manages more than 170 facilities through its growing third-party management platform. The third-party management business not only generates incremental income but serves as a source of potential acquisitions.

“One of the reasons we have migrated to those leading demographics, in terms of population density and income, is that we have more of an urban focus than our peers. We are focused on growing in those high-barrier-to-entry markets,” Marr explains.

The company, Burke says, has taken a prudent approach to acquisitions. CubeSmart has remained “laser-focused” on buying higher-quality properties and shied away from acquiring portfolios that would bulk up its holdings but potentially dilute asset quality, according to a Green Street report. The company’s small size relative to Public Storage and Extra Space Storage is an advantage in terms of external growth, given that acquisitions and developments can more easily move its “net asset value needle,” the report notes.

Typically, people who rent storage space choose facilities in close proximity to where they live, even if they can find cheaper space further away, says Rod Petrik, a managing director at Stifel Nicolaus. “The weird thing about the self-storage business,” he explains, “is that people like to be near their stuff. You can always drive further away and find a cheaper storage unit, but people generally don’t do that.”

Marr says CubeSmart will continue to take a disciplined approached to acquisitions, cherry picking stable individual assets and small portfolios of stable facilities in target markets. The highly fragmented nature of the sector offers plenty of opportunities: Publicly traded REITs own only about 10 percent of all self-storage properties in the United States, Burke notes.

What’s more, many smaller operators are struggling to compete with dominant players on a number of fronts, including technology. In recent years, CubeSmart and its publicly traded peers have made major investments in technology, particularly with regard to Internet marketing and revenue-management systems. Those investments have served them well when it comes to attracting new customers and using data to drive decisions about rental rates.

Publicly traded REITs have also centralized their revenue-management functions, Burke explains. In the past, decisions about rental rates were typically made at the local level by property managers. Today, self-storage REITs are making those decisions at the corporate level and relying on sophisticated revenue-management systems, says Burke.

“CubeSmart and the industry have become increasingly more sophisticated from a revenue-management and digital-marketing standpoint, and we are far from finished,” Marr says. “There is still plenty of runway to improve those systems.”

Technological advances in digital marketing and revenue management, along with low levels of new supply, have led to record-high occupancies across the sector, according to Green Street. Last summer, CubeSmart’s portfolio reached an all-time high occupancy level of 93 percent, according to Marr.

In the third quarter of last year, the company’s same-store net operating income grew by nearly 11 percent, on a year-over-year basis, thanks to a combination of sector-leading revenue growth of nearly 8 percent and a slight increase of about 1 percent in property operating expenses. Adjusted funds from operations increased 12 percent on a year-over-year basis in the third quarter.

“Operating performance across the sector has outpaced other property types over the last few years,” says Burke of Green Street. “Strong demand and minimal new construction have been the primary drivers.”

“Dean Jernigan and Chris Marr did a masterful job of managing the company’s balance sheet through the downturn and coming out of the recession were able to pay down debt and improve occupancy levels. CubeSmart is a much better company today, five years after the recession, than it ever was prior to the recession,” says Petrik of Stifel Nicolaus.

When Jernigan took the helm of the company in 2006, its balance sheet was heavily financed using commercial mortgage-backed securities (CMBS), Marr notes. In recent years, the company has paid down that CMBS debt, giving it greater balance sheet flexibility, and funded acquisitions with unsecured debt and common equity.

“As that CMBS debt has come due, we have paid it down with a combination of equity and unsecured debt. We have also acquired properties on a leverage-friendly basis, improved the maturity profile of our debt and improved our coverage by successfully growing same-store net operating income,” Marr explains.

Some analysts say the outlook for the self-storage sector is strong, but fundamentals are likely to slow somewhat following several years of explosive growth. With portfolio occupancies at all-time highs, operators will have to focus more on increasing rents to drive revenue growth, Burke says.

“Our fundamental customer is someone who is moving. When you see job growth and consumer confidence improving, it gives people the confidence to move,” which generates demand for self-storage space, he explains. 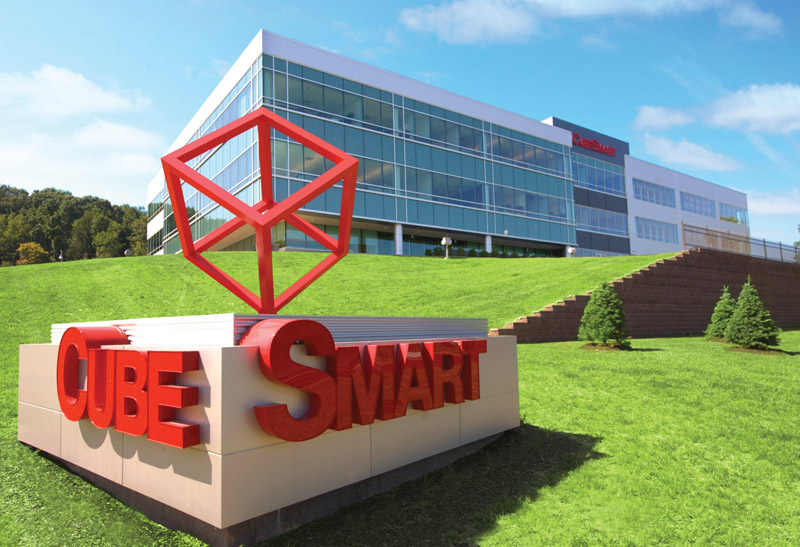 Because moving is stressful, CubeSmart strives to set itself apart by making things easier for customers, Marr says. Its facilities offer a host of free services and amenities, from Wi-Fi to workstations. Customers also can purchase “premium” services for a fee, such as courier delivery of items and professional help with organization of storage units. The offices at its facilities have an open layout so that employees and customers can interact casually, rather than being separated by off-putting physical barriers such as high service counters.

“As we develop and enhance systems, we are doing that with the mindset of a more customer-centric approach. Rather than simply answering the phone, for instance, we want to welcome you back as a repeat customer and offer services that might meet your needs,” Marr observes.

The urban nature of CubeSmart’s portfolio, Marr adds, is a competitive advantage when it comes to capturing demand driven by millennials and retiring baby boomers. Many millennials prefer city living, even if that means living in tight quarters, and renting rather than owning, he explains.

“That generation likes to be flexible and be able to move around. So each time millennials move, they might be in need of storage,” he says.

Self-storage operators in urban markets are also benefitting from demand generated by retiring boomers who are forgoing golf communities in favor of living in places where they can easily walk to shops, restaurants and theaters and access public transportation, according to Marr. Many retirees downsize, moving from single-family homes into smaller condominiums or apartments, and need storage space because of that, he says.

“We are really benefitting on both sides of the demographic equation” when it comes to millennials and boomers, he says.

CubeSmart is undertaking a modest level of development in its target markets. Although new supply in the sector appears to be picking up, Marr says it should remain low, by historical standards, in the near term. Local entrepreneurs, he explains, still find it difficult to get construction loans. What’s more, the costs associated with competing with dominant players from an operational perspective, particularly when it comes to digital marketing and other types of technology, have become a deterrent to many would-be developers, Marr points out.