Infrastructure REITs Are Powering the Growth of Cloud Computing

Infrastructure REITs are helping support the growth of mobile technology and cloud computing around the world. 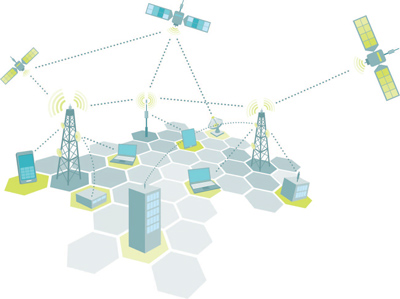 The chairman and chief executive officer of American Tower Corp. (NYSE: AMT) says plenty of new bandwidth will be needed in the United States and abroad in the years to come to meet demand for mobile communications, meaning more network equipment deployed on cellphone towers. American Tower, a REIT that owns and operates more than 100,000 towers and related communications real estate in 13 countries, is leveraging consumers’ accelerating demand for more data in order to be able to do everything on the go, from streaming movies to making payments to playing video games. The REIT offers a way to help mobile operators offload capital-intensive network infrastructure costs and instead concentrate on their core competency as mobile carriers. Meanwhile, investors can collect a nice dividend.

“Infrastructure REITs such as American Tower are the most efficient and effective way to drive the deployment of mobile telephony services and the mobile Internet not only in the United States, but also around the world,” Taiclet says.

“The digital infrastructure REITs have really transitioned over the last couple of years from being viewed solely as telecom or Internet-based stocks—largely owned by telecom media and technology investors—to more of a hybrid, where they are more readily accepted and owned by REIT-oriented investors,” says Frederick Moran, an analyst for Burke & Quick Partners in Delray Beach, Florida.

Beginning in the 1960s, the Internal Revenue Service greenlighted different types of real estate infrastructure, such as communications  towers, power lines and cables, as eligible real estate under the REIT rules. That has cleared the way for a number of new REITs to be formed.

Real estate infrastructure behaves much like certain other commercial real estate. With fiber, for example, the asset, usually buried underground, has a useful life of 30 to 50 years, says Kenny Gunderman, president and chief executive officer of CS&L. The REIT’s triple-net leases typically run for 15 years. “The physical asset is permanent, long-lived and very much fits the category of being deemed as real estate,” Gunderman says.

In the data center sector, REITs such as Equinix have expanded thanks to the growth of digital payments, digital media and gaming, says Charles Meyers, chief operating officer of Equinix. Now, the cloud has taken over.

“That is having a significant effect on our business in terms of growth and the long-term addressable market we think is out there,” he says.

The macroeconomics all point to rapid growth for infrastructure REITs. Spending on information technology infrastructure for cloud environments will increase to $54 billion by 2019, representing a compound annual growth rate of 16 percent, according to International Data Corp. With mobile, meanwhile, the demand to be able to stream video and entertainment anywhere will significantly increase in the years to come.

Monthly data per smartphone in 2015 increased to 1.4 gigabytes per month, up from 1 gigabyte in 2014, according to a November 2015 Ericsson Mobility Report. Yet, that figure is expected to balloon to 8.5 gigabytes in 2020, representing a 35 percent compounded annual growth rate. Part of that growth will come from customers upgrading to fourth generation phones (4G) and users wanting more data along the way. “The longer people have the device, the more they use it,” Taiclet notes. “When you multiply all of these usage factors together, it’s a significant increase for quite a few years to come. Then 5G will come along, further extending the demand for tower space and other communications real estate.”

Outsourcing On the Rise

The conundrum for Internet companies and mobile operators is being able to fund growth and meet demand. CS&L, for instance, leases fiber and copper to carriers.

“Telecom is a very capital-intensive industry,” Gunderman says. “Even the biggest, best-capitalized companies in the world don’t have unlimited capital and management resources. We provide just another attractive capital source to build out this infrastructure faster.”

All the growth in demand for digital space and capacity has led to a sea change in thinking over the last decade. In the data center space, for example, just seven years ago big enterprise data users were more than hesitant to outsource, says Gary Wojtaszek, president and chief executive officer of CyrusOne. “They were unbelievably reluctant,” he says. “It took a really long time to convince them to trust us with their critical gear.”

The demand for more space has pushed them to act.

“The explosion in data, it’s just unbridled,” Wojtaszek says. “It is causing more of these companies to basically run out of space and they can’t deal with the logistical challenges of how quickly their data is exploding.”

Cloud computing companies such as Dell Corp., Microsoft Azure and Amazon have enticed big business to outsource in part, and, in turn, sometimes these cloud providers turn to data center REITs. Digital companies are also finding they can put capital to better use than having it tied up in real estate.

Still, supply isn’t infinite, Moran says: “The availability of these huge, secure warehouses is getting tighter and tighter.”

The outsourcing is also about efficient use of capital.

Verizon Communications Inc.’s decision last year to effectively sell control of its towers to American Tower represented the last major transfer of a portfolio by a U.S. mobile operator. American Tower paid $5 billion for the right to lease more than 11,000 towers for 28 years, with the option to buy them at expiration. Verizon, which had sold off landlines in three states for $10.5 billion, had concurrently announced an expansion of its share buyback program by $5 billion.

“It was the last of the remaining crown jewels of towers available, not only with some of the highest-quality structures but also some of the most prime locations,” Moran says.

Compliance is also driving the outsourcing. Now, companies often recognize it’s more practical to farm out facilities management, as operators such as CyrusOne can handle compliance issues, which are growing ever more complicated and onerous as the Internet matures and concerns about cybersecurity grow.

“That is only going to increase,” Wojtaszek says. “There is no industry where compliance is going in the opposite direction.”

When it comes to the infrastucture REITs, growth will come from a combination of leveraging existing assets and building new ones. With American Tower’s deal with Verizon, the towers averaged 1.4 tenants; yet, the industry average is 2.4, giving American Tower plenty of room on the upside, Moran notes. This gives American Tower the ability to market the assets to AT&T, T-Mobile, Sprint and potential new tenants as well. 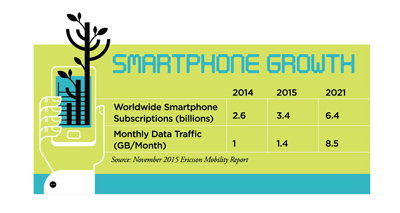 “Now that it’s under [American Tower’s] ownership, they can lop on incremental customers at a marginal cost to them and raise rental revenue on the towers materially,” Moran says.

Taiclet notes this fundamental concept drove the creation of the tower leasing business, which started back in the 1990s. “There was this incredibly logical opportunity to convert single-use, non-performing assets of a mobile operator into commercially leased multi-use assets for the whole industry,” he says.

With data centers, the upside potential is tapped by developing sites in a modular way. It can build at a massive scale and achieve great efficiencies. CyrusOne, which was taken public by former parent Cincinnati Bell in 2013, had brought its Phoenix 1 facility online in 2012 with 150,000 of net rentable square feet. It then added 63,000 net rentable square feet at Phoenix 2 in 2014 at the same site, located in Chandler, Arizona.

From the fourth quarter of 2014 to the third quarter of last year, an increase in net operating income of roughly $11 million drove the development yield to 15 percent, up from 10 percent, according to a company investor presentation. Additional acreage for five more data centers on the Phoenix campus could drive yield there as high as 20 percent.

“The modular way we build these things ensures that we only dribble out capital on a just-in-time basis,” Wojtaszek says. “So we are able to show our customers ways they can grow with us for years and never run out of space. From the investor’s perspective, we’re not throwing out a lot of capital that’s not making a great return for us right away.”

Another emerging theme with infrastucture REITs is globalization. Some companies are amassing the size to compete on a worldwide scale. In the data center business, this is critical for global companies in need of superfast connection speeds, according to Meyers of Equinix. In the past, a company could get by with two to four data enterprises and a network partner to connect them.

“That approach is increasingly out of touch with today’s demands,” Meyers says.  “People are having to think differently about infrastructure.”

Equinix, for example, had 145 data centers as of late January, spanning 40 markets across five continents. The proximity to top business centers means clients can reach most global markets in 10 milliseconds. “Our value proposition revolves around creating and curating these digital ecosystems,” Meyers says.

American Tower has also expanded internationally, with a presence in India, Germany, Latin America and Africa. Last October, American Tower signed an agreement to more than triple its tower portfolio in India through the approximately $1.1 billion purchase of a controlling interest in 42,000 towers from Viom Networks Ltd.

The portfolio has all the hallmarks of what American Tower looks for in a deal: a democratic country, a market with an ample number of mobile operators and an attractive entry point to build scale. The towers have an average of 2.3 tenants each. That leaves plenty of room for growth, since there are eight mobile operators with 5 percent market share or more in a country with a population of 1.3 billion. India’s cellphone operators are also mostly 2G, leaving a technological upside too.

For investors, the digital REITs offer opportunity at a time when interest rates are likely to stay low due to a muted economy, according to Moran.

“The digital infrastructure REITs have a fairly recession-proof, steady demand from customers like the Internet, big industry, or wireless telecom that need to invest in order to fuel growth,” he says. “You have a secular demand trend that will continue unabated at a time when supply is harder and harder to keep up with.”

With cloud computing and mobile needs growing so quickly, it might not be long before the digital REITs become a major sector in their own right.