With inflation running high and the Federal Reserve poised to begin raising interest rates, new questions have arisen in the outlook for REITs. While REITs tend to outperform the broader stock market during periods of moderate to high inflation, many investors are also interested in REIT exposures to rising interest rates.

Fortunately, REITs have strengthened their balance sheets and reduced exposures to interest rates over the past decade in ways that will help them continue their recent solid performance in the year ahead. Indeed, a close examination of their financial exposures suggests that increases in interest rates may have little impact on their operating performance and, presumably, stock market returns. 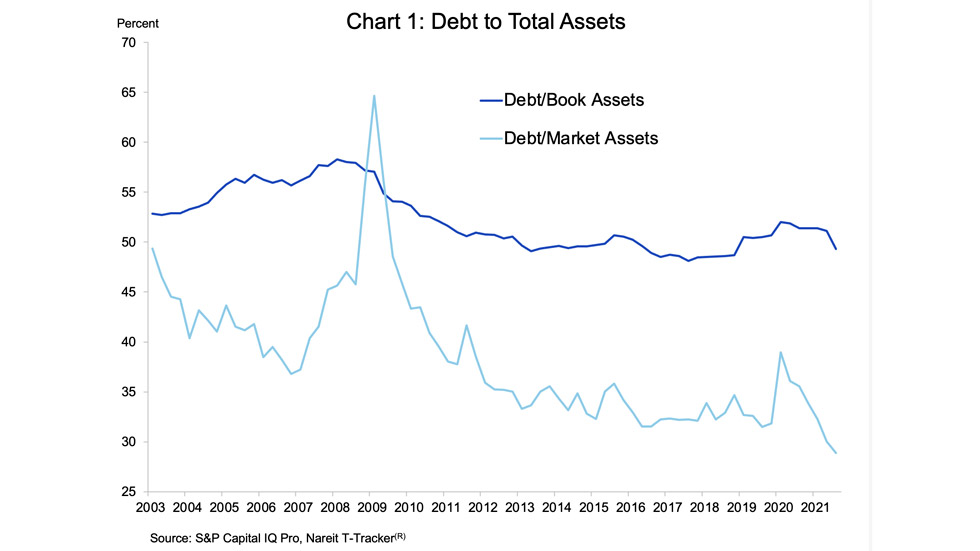 The primary factor driving these reduced exposures to interest rates is that REITs lowered their leverage in the years since the financial crisis in 2008-2009. Chart 1 shows the debt-to-book assets leverage ratio, which declined from nearly 60% in 2008 to a recent low of 48%. Market leverage (which substitutes stock market capitalization for book shareholder equity in the denominator of the ratio) declined even further, to a record low of 29%. (Note: all the charts and data presented in this market commentary are available for free download in the Nareit T-Tracker®.) 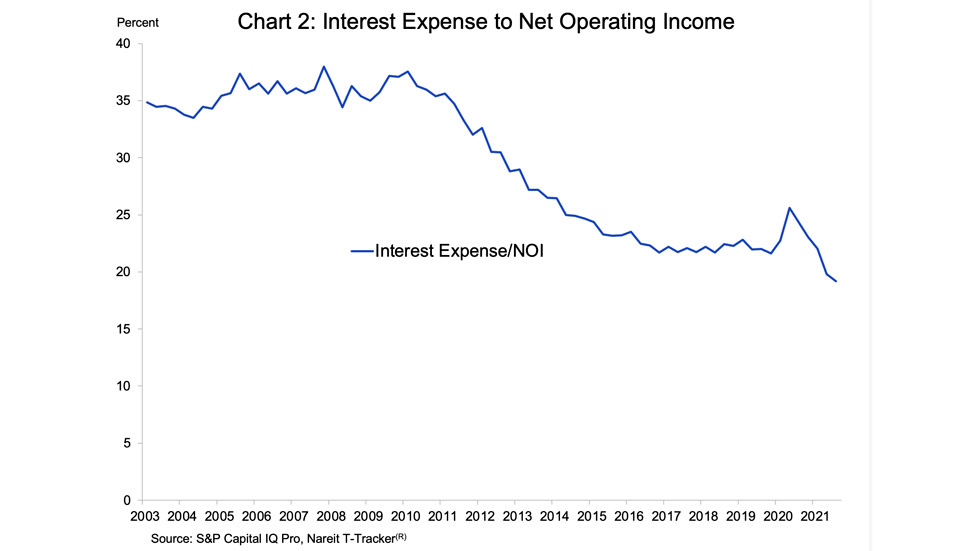 REITs achieved this lower leverage by relying more heavily on raising equity capital rather than debt to fund their real estate portfolios. This lower leverage, combined with low interest rates on the debt they have issued, has brought interest expense down from 38% percent of NOI in 2007, to 19% in the third quarter of 2021. 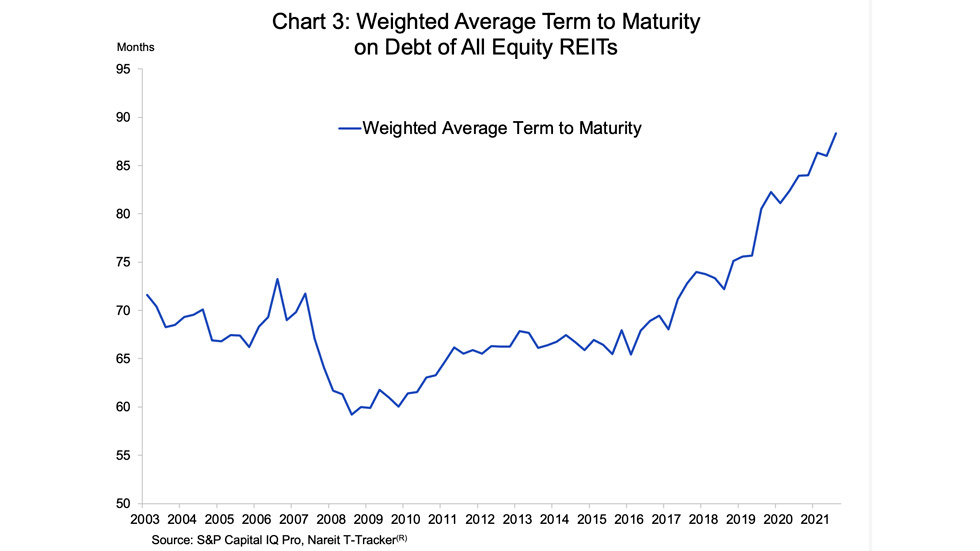 Moreover, REITs have locked in these low interest rates for well into the future, lengthening the average maturity of debt outstanding, from less than five years in 2008 to 88 months (more than seven years) in late 2021. These lower interest expenses and long debt maturities will allow a greater portion of NOI to go profits, and dividend payments to shareholders, even as market interest rates begin to move higher. 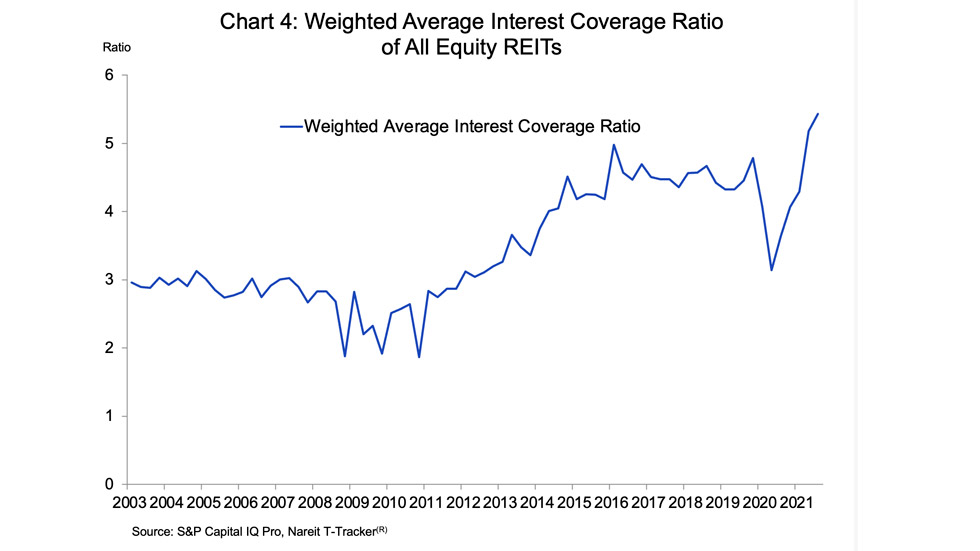 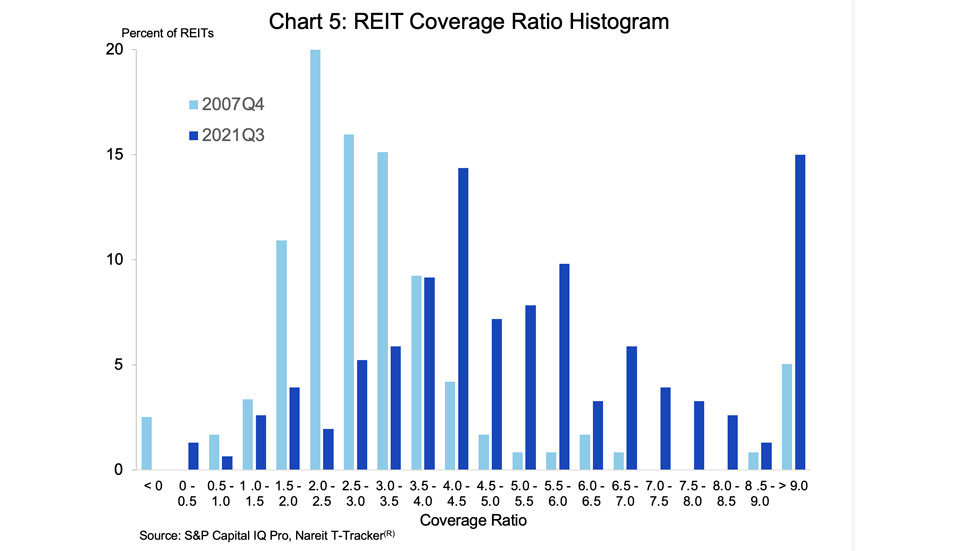 Investors are surely aware that the pandemic has brought about unprecedented economic developments, and that a new set of challenges lies ahead as the Federal Reserve begins normalizing monetary policy as it attempts to control inflation pressures. It is reassuring in this environment that REITs have solid balance sheets and low interest rate exposures to help protect them against any unanticipated events ahead.